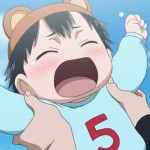 But that is what is so important about this work, is that it shows you can take the tough guy and little kid formula, and do it Takeshi style, and it comes out as a great comedy. Not as crap. 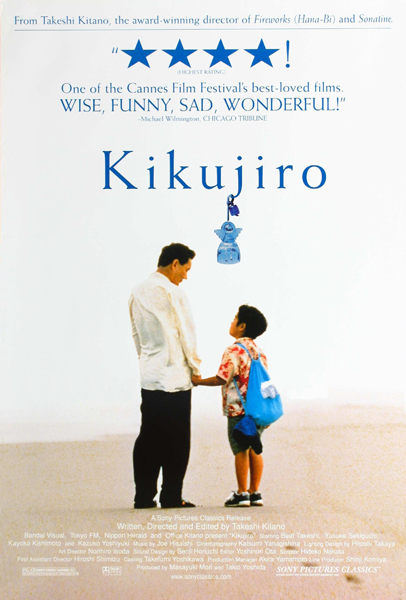 Takeshi is, like our own Mr. Clint Eastwood, one of the great Badass Laureates. He has a stoic type personality and he is a master of the deadpan expression. He plays characters who go way overboard and convinces you with his eyes that he doesn’t see anything wrong with it. And what brings him into the Laureate category is that he directs his own pictures, and that his directifying style happens to be exactly the best one to showcase his Badass persona.

In a typical tough guy and kid picture, there might be a similar scene to the one where Takeshi goes back and beats the living shit out of a trucker for not giving him and the kid a ride. MAYBE. But there would be wacky music playing or “Bad to the Bone” or some shit like that. The trucker would start screaming like a baby and wiggling around goin “Oh no!” and eventually “Mommy!” and maybe he’d piss his pants and you’d think, “He’s not gonna be hurt that bad but boy is it fun to watch this fella squirm! Ha ha!”

Not here. Takeshi does it in one uninterupted shot, no music, from across the street. Like a police video or something. And he just starts beating on the dude with a stick. The sheer brutality of it is where the laffs come in.

But the movie’s not all that violent. Takeshi’s character is basically a juvenile delinquent in an adult body. His wife convinces him to take her friend’s grand kid on a trip to see his mother. So he takes the kid to bet on bicycle races. This doesn’t work out so instead of trying to come up with a legitimate plan for traveling, he comes up with a bunch of dumb schemes. Like, what if we pop somebody’s tire, then we could help them change their tire, and they would offer us a ride.

The key to Takeshi is that he’ll do stupid shit like this, or blatantly stealing right in front of somebody, or assfucking some dude out of the blue in Boiling Point, and then you’ll look at him and he just sits there with this blank expression on his face that says, “What?”

The Takeshi approach could pump some new blood into any number of dumb comedy premises. Think of any one of these comedies that Arnold Schwarzenegger does every couple of years. Like he is pregnant or he has a short twin brother or he has to train an ostrich to defuse a bomb and etc. etc. Arnold has no fucking clue how to make that funny. Takeshi can do it in his sleep. And then wake up with a new idea for a gangster movie that came to him in a dream.

Please my young friends out there who have not yet seen the pictures of Beat Takeshi. I promise you. You will fall in love with the Takeshi style if you give it a chance. It is a very understated style, very slow and quiet. And that’s why it works so well. It’s not flashy or action packed and there’s not alot of talking. It’s all in the air. His persona never gets old and his directation is only getting better. There is no one else like Takeshi. But let’s leave this guy in Japan, all right americans. He’s doin good over there.

Badass Laureates Takeshi Kitano
This entry was posted on Saturday, May 27th, 2000 at 10:36 pm and is filed under Comedy/Laffs, Drama, Reviews. You can follow any responses to this entry through the RSS 2.0 feed. You can skip to the end and leave a response. Pinging is currently not allowed.