The star of the show is James Brown (with mustache). Also on the bill are Bill Withers, The Crusaders, The Spinners, B.B. King, Celia Cruz, Miriam Makeba and some African musicians.  The movie shows about 1 song per performer, but it’s also about setting up the show. There is priceless footage of a party held back in the states before they all leave for Zaire, James Brown making a speech and everything. On the plane they’re all singing and playing guitars, drums and flutes. I didn’t notice JB or any of the big icons during these scenes, but it’s still amazing to see a plane full of people having so much fun. Then when they arrive there’s a ceremony set up for their arrival. The highlight is the huge smile on Muhammad Ali’s face when he goes up to shake JB’s hand. 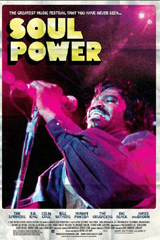 Before the show there’s some hanging around, some of Ali’s training, some behind the scenes with the white dudes setting up the stage, all interesting. One thing that might bother some people, but that I really liked, is that it doesn’t offer much explanation of anything. It just plunges you in, direct cinema style, and you can figure out some of what was going on. There are no talking heads added in this time. I had some questions, but I didn’t mind. I only wish they’d labeled who the musicians were at the beginning and not just the end.

It’s an amazing time capsule not just of an incredible event, but also a place in American history. In some ways it’s sad to watch, because as far as I know all the excitement they had about black Americans reaching out to Africans never turned into much. They seem so sure this is the bridge to the future. And here’s Don King talking pro-black, but these days he’s just known for ripping off Mike Tyson and making funny rhymes. Motherfucker stumped for Bush, for cryin out loud. Only in America. Not in Africa.

Ali talks about why he must win, saying it’s his duty to stand up for the black man in America, because the musicians won’t say what needs to be said. Sure enough he has some mildly tense moments with some of the musicians teasing him about what he says about black men not being free, or goofing around in boxing gear while he’s intensely training. There’s a shot of him in the ring peering out as somebody (B.B. King?) is making the press laugh clowning around with the punching bag. Poor Ali looks so alone. Nobody else is on the same page with him.

I don’t know if any of you guys have seen it, but there’s an episode of The Mike Douglas Show on DVD where Ali is one of the guests and Sly Stone is the guest co-host. Ali’s in a real serious, political mood, and he gets into it a little with the other guest, some politician. Sly tries to goof around to ease the tension, and Ali doesn’t respect this. Watching SOUL POWER I realized Ali was right. He really did make sacrifices standing up for what he believed, like when he refused to join the army and lost his title and boxing license and had to take it all the way to the Supreme Court. Musicians more often talked a good game but couldn’t deliver in the ring (metaphor). They were really about party and bullshit.

But there’s something to be said for JB’s corny “I am somebody” message that ends the movie. Maybe he didn’t have the impact of Ali, and politically he was much more conservative anyway. But I think he did make a difference. Just seeing those dudes looking and being so fuckin cool probly gave some people an idea of how to be confident in themselves. And I mean, if you were black, how could you listen to some of that music without being proud? Man, that’s ideal struttin music.

And then there’s Bill Withers. I don’t know if all of you know who that is. He’s a great soul singer known for “Ain’t No Sunshine,” “Just the Two Of Us” and “Lean On Me,” but also he has great, less worn out songs like “I Can’t Write Left Handed” and “Grandma’s Hands”:

So much emotion in those songs. He was so good at the sad and the bittersweet, but also at the joyful. I think of him as one of those positive, humane soul singers along with Curtis Mayfield and Marvin Gaye who can sing about little pieces of humanity and project them through a filter that just shines out life in all its beauty. I swear I’m not stoned I just get that way trying to describe songs like that.

In the behind-the-scenes footage Withers looks a little shy and distanced from the other musicians, and he talks very earnestly about his intent to learn from this experience and from the African musicians. On stage we see him sitting with an acoustic guitar singing “Hope She’ll Be Happier.” It’s been established that most of the crowd doesn’t know much English, but there’s so much emotion in his voice that you can see why they’re cheering for him even if they don’t know what the hell he’s talking about. Maybe they don’t know what he’s singing, but they can definitely feel it.

Leon Gast is credited as director of WHEN WE WERE KINGS, and he’s seen shooting footage in this movie. The editor of that one, Jeffrey Levy-Hinte, is credited as director here, since he put it together out of 125 hours of outtakes, but I feel a little weird about that since he didn’t shoot the footage. (I never knew before that some of it was shot by the great Albert Maysles. Makes sense, though.) From what I understand there was stuff they couldn’t use because of music rights, I’m not sure what, but I do know that which ever companies are responsible should burn themselves to the ground in shame for stopping the world from seeing this stuff. Still, I’m thankful we get to see this much of it.

Soul Power comes out on DVD in the US January 26th, but it’s already available in Europe as part of the Masters of Cinema series I believe.

B.B. King Bill Withers concert films direct cinema James Brown Muhammad Ali
This entry was posted on Wednesday, January 6th, 2010 at 1:32 am and is filed under Music, Reviews. You can follow any responses to this entry through the RSS 2.0 feed. You can skip to the end and leave a response. Pinging is currently not allowed.