In order to truly understand how OWL 300 is the talking bird movie for our times, one must also explore the quintessential talking bird movies of other eras. And the one that came to mind when I thought about that was the one from 1974, JONATHAN LIVINGSTON SEAGULL. I don’t know if you guys remember this one, but it was a huge book at the time, but not a kids book like all movies are based on now. It was seen as this inspirational, philosophical type of deal. 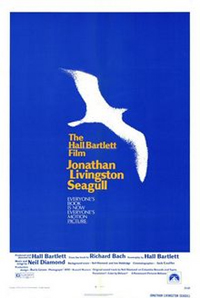 OWL 300 could not have been made before, not only because the technology didn’t exist but because there hadn’t been the internet-launched “geek” takeover of Hollywood that made it possible for suits to consider spending a hundred million bucks on a fantasy about bird war. JONATHAN LIVINGSTON SEAGULL is the same way, it could not be made at any time other than when it was, because the entire movie is footage of a seagull flying around, with half-whispered internal monologue questioning bird-society’s perception of the limitations of seagull flight. Also because all the music is by Neil Diamond.

There is a little bit of plot. Jonathan experiments with different types of dives, with flying higher than other seagulls and with flying at night. He talks to himself about how seagulls can’t fly faster than 62 mph (I wonder where he got that figure – do seagulls do studies of that stuff? And shouldn’t they come up with their own way of measuring speed?) but wouldn’t it be great if they could? The pompous seagull establishment is threatened by his quest for excellence and they kick him out. So he flies around by himself for a while until he meets other seagull outcasts and tries to learn flying/enlightenment from them. There’s a whole psychedelic part where he goes beyond death or something. It could almost be seagull EL TOPO. Except boring. And there’s not a bunch of seagull freaks that get shot at the end.

In the beginning there’s a hint of FOUNTAINHEAD style toughshitism. He has some awkward lines about “it doesn’t take away anyone’s freedom if I do that,” he talks disgustedly about “the flock” and how “there must be more to life” than doing seagull stuff, and the seagull elders make a bunch of perfectly reasonable points about how important a flock is to the safety and survival of a seagull, but they say it in the way a bad guy says something evil that you’re not supposed to like.

But it wasn’t the Ayn Rand people that loved this book, it was the self help people. This was a time when rock stars practiced transcendental meditation and yoga. Their minds were still clogged up with drugs and hippie ideals, so they were mentally and spiritually prepared for the talking seagull. They thought it was deep. The movie– maybe not as much. Wikipedia claims that Richard Bach, the author of the book, hated the movie so much he sued for negligence. Wikipedia seems to be full of claims of authors hating movies (same thing with Ayn Rand and THE FOUNTAINHEAD), but I can never find anything explaining what they hated about it.

Looking back on those days it just seems so corny and ridiculous that people were so into all that shit. But in a way I gotta admire it, because it’s hard to imagine a popular movement of people trying to expand their minds in 2010. Now self improvement is mostly superficial, it means making your ass smaller, tightening your abs, adding two inches to your dick. Let’s see Neil Diamond sing about that.

On a technical level the movie is pretty impressive. I don’t actually know how they did it. It’s lots of helicopter shots, but they follow this bird all over the fucking place, with nice smooth camera movement, as if they planned out with the bird where he would go. They even have close-ups while he’s flying, it’s crazy. I read that they used radio controlled puppets for some parts, but it looked like 99% real bird to me. And the photography is beautiful. Amazing shots of sun, clouds, vast ocean, sand, snow. I think of seagulls as somewhat urban, living in a port city where you see them around with the pigeons and crows. These ones you don’t ever see with humans, or in civilization. But you do see them picking at piles of garbage.

It’s kind of shitty to look at somebody doing something unusual like this and tell him he should’ve done something more normal, but honestly I would rather see a nature documentary if they really could follow one seagull and see what he does, where he goes. That would be more interesting, I think. This one is interesting that it exists, but not so fun to watch. About 80 minutes in it seemed to wrap up and there was a Neil Diamond song montage and then a sunset and I thought “Well, at least it’s short,” but it turned out there was another 15 minutes left.

I don’t know, I feel like J.L. Seagull is being kind of a snob, always complaining about what other seagulls eat and thinking he can improve them by teaching them his flying tricks. But you know what Jon, maybe other seagulls don’t give a shit about diving real fast, you ever thought of that? Why does that make them worse than you? But on the other hand I guess I can understand why he would feel so alienated. Seagulls can be some devious fuckers. One time recently I was eating a sandwich in Seattle center and got mobbed by about 50 of the bastards. They probly get fed by the tourists alot so they learned this trick, they form a circle around you and slowly tighten the circle. It’s the first time a seagull ever looked imposing. They’re bullies, when it comes down to it. But they’re all bark. I didn’t give in.

The only seagull I ever fed is a one-legged one I see on a fishing dock sometimes. I call him Ahab. But then recently I thought I saw him and I noticed a little bit of a stump where his missing leg was. I thought wait a minute, I never noticed a stump before. Is there more than one one-legged seagull that hangs out here? Then he put his leg down – motherfucker was faking it! I think maybe Ahab gets fed more by suckers like me who swear they respect him and don’t feel sorry for him, and the other ones are smart and devious enough to pick up on it and do an Ahab routine so they can get in on the action.

So maybe some of them could stand to fly through the stars and do some trippy negative film effects and get some enlightenment and shit. When he’s not talking shit Jonathan seems like a pretty nice bird. He goes around by himself and minds his own business.

Shit, I gotta confess, this movie kind of made me envious of seagulls. I’m not sympathetic to Jonathan’s whining. Sure, the bastard has to eat garbage, but at least he doesn’t have to work! He just flies around, explores. It’s a nice day, hey, I’ll fly over to that sand place. I wonder what happens if I fly over this direction a couple miles? He gets to explore. He can travel on land, in air, by sea. Do whatever the fuck he wants. I guess he has to expend effort to find food, but if he’s not uppity like Jonathan it’s not that hard. He doesn’t have to live on a schedule. He doesn’t have to wait for his day off to do what he wants. He’s free.

I don’t feel like this is a timeless story, I don’t think they’re gonna remake it with the electronical technology. It really is mostly just a bird flying around muttering to himself. Occasionally they do stage a scene with multiple characters, like when the elders sit up on some rocks looking down on Jonathan and banishing him. That part reminded me of the religious leaders in HAPPY FEET coming down on poor Mumbles for knowing how to tap dance. Fucking fascists.

Director Hall Bartlett started out doing documentaries, I guess that’s why he knew how to shoot this thing. And he had a couple accidental impacts on pop culture: his movie UNCHAINED spawned the classic song “Unchained Melody,” and his movie ZERO HOUR! was where they got the plot (and exclamation point) for AIRPLANE!

??? bird movies Hall Bartlett not much happens talking animals
This entry was posted on Friday, October 1st, 2010 at 2:28 am and is filed under Fantasy/Swords, Reviews. You can follow any responses to this entry through the RSS 2.0 feed. You can skip to the end and leave a response. Pinging is currently not allowed.