The SBI plan is not flawless. For one thing, the clones don’t automatically know how to fight. Bolo Yeung has to train them. They never explain who Bolo is playing, so I gotta assume he’s playing himself, a former co-star of Bruce Lee, training the lab-grown cellular matter of his dead colleague. It makes you wonder, too – was Bolo a spy this whole time? Was he sizing up Bruce on the set of ENTER THE DRAGON? Did he consider Van Damme clone material when he was doing BLOODSPORT? Does he ever get jealous that he’s not the one they want to clone? I mean he seems worthy of cloning to me. There aren’t many guys like Bolo, other than that guy in DRUNKEN MASTER that I thought was Bolo but it turned out it was some other guy. 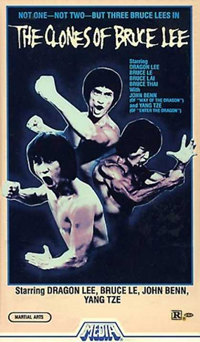 Anyway, if the clones can’t fight until you train them then what the fuck good is a Bruce Lee clone as a secret agent? Do they need his philosophy? His percussion playing? I don’t get it.

Maybe they have his muscle memory, maybe after a couple lessons with Bolo they’re fight-capable Bruce Lees. That does seem to be the case. But I notice that they don’t seem to fight light the original Bruce Lee. They don’t dance around like him, they do the type of gratuitous show-off moves he was against, they do styles he was never known for such as monkey kung fu. So I’m not sure if being clones of Bruce Lee has any use for them at all. They oughta send these clones back to Lee’s family for hilarious My Three Dads shenanigans, it seems like a better reason to bring the poor guy’s DNA back from the dead.

The clones are played by famed Bruce Lee imitators Dragon Lee (#1), Bruce Le (#2) and Bruce Lai (#3). (Bruce Li, considered the Bruce Lee of Bruce Lee imitators by some, is not in it.) When you see these three guys standing next to each other it’s more obvious than ever that they don’t really look that much like Bruce Lee. Because if they don’t look like each other then how could they all look like Bruce Lee? I never did figure out for sure but I assume we’re supposed to imagine they all are exact Bruce Lee duplicates.

But if so the first mission makes no sense at all. One of the Bruce Lees (Bruce Lee #1 I believe) is sent to bust a corrupt movie producer/gold smuggler by acting in his movie. You assume he gets the job so easy because he’s a clone of Bruce Lee, but nobody ever says, “Holy shit, this guy looks exactly like Bruce Lee!” or “Hey, I thought Bruce Lee was dead and also how did we get him in our shitty movie, you’d think he’d have better offers at this point in his career.” No, they just call him “the new kid” and then coincidentally decide that if he died he would become an icon, “like Bruce Lee.” So they start trying to kill him on camera (like GAME OF DEATH).

This whole section really makes no sense as a Bruce Lee clone story, so I wonder if this is actually a compilation movie made from a couple different fake Bruce Lee movies. But I can’t find any evidence to support that theory.

Bruce Lees #1-#2 get sent to meet up with an agency asset (Bruce Thai) who, although not a clone of Bruce Lee, looks as much like him as anybody else. And they all wear their Bruce Lee sunglasses and hairdos together while on a mission to stop a mad scientist. This is a better use of the clones concept because what good is one Bruce Lee clone? At best it’s exactly as good as one Bruce Lee. We’ve seen that in Bruce Lee movies. The important question that this movie must answer is how powerful are 2-3 Bruce Lees working side by side?

Well, they’re more powerful than bronze. The mad scientist has created some bronzemen, and I’m sure I don’t have to tell you guy swhat a royal pain in the ass those fuckin bronzemen can be. Metal skin, going around punching people – it’s bullshit. Not trying to be racist, I’ve just had bad experiences with bronzemen, I guess. Well, because they’re made of bronze they’re hard to kick, but luckily theres’ this peasant lady that picked some poisonous grass and during a fight one of the Bruce Lees knocks over one of the bronzemen and it falls with its head right next to the poisonous grass so it starts eating it and dies. So the Bruce Lees fight the others and stuff grass in their mouths. Then there’s a whole thing about how the scientist who created the Bruce Lees doesn’t feel he gets enough credit so he makes them fight each other and some nurses have to destroy a magnet or something so they won’t be controlled by the mad scientist anymore and won’t have to do his mad bidding. They’ll be free citizens of the world who can choose for themselves which bidding to do.

This is one of those shitty kung fu movies that you can only find washed out, full frame, dubbed, on VHS or with 9 other movies in a cheap-ass DVD collection. And that’s where it belongs, to be frankly honest. But it’s too bad it’s not better, because it’s such a funny concept they could’ve done something more clever with it. Unfortunately that would require more care and thought than this particular director was willing to expend. A prolific Bruceploitator, Joseph Kong Hung also directed BRUCE’S DEADLY FINGERS, NINJA VS. BRUCE LEE, MY NAME CALLED BRUCE, BRUCE LEE IN NEW GUINEA and TREASURE OF BRUCE LEE.

I definitely think Bruce Lee clones could have alot more interesting adventures than this. They could attack the set of KUNG FU or the reshoots on GAME OF DEATH. They could bust Nixon. Rescue the hostages in Iran. Colonize the moon. Stop a series of shark attacks. Make contact with extra-terrestrial life. End the war. Travel back through time to kill Hitler.

I have long wished there was a Seattle-based blaxploitation picture called PURPLE DRAGON where Bruce Lee and Jimi Hendrix have to team up to catch Ted Bundy. But the timeline doesn’t really work out. The only time all three were in Seattle was in the mid ’60s, when Bundy was still a teenager. Jimi moved to New York in ’65, and Bruce was moving around between Seattle, Oakland and Hong Kong around the same time. You could always say they came back to visit or something, but Bundy’s murders didn’t really start until the ’70s after Jimi died. By cloning both Jimi and Bruce maybe this could work out as a ’70s period piece and get some more funk on the soundtrack.

You know there’s that cliche among movie aficionados, they always say they oughta remake the bad movies, not the good ones. If so I would like to request this one. There could be a whole James Bond type series with the different Bruce Lee clone agents going around saving the world and shit. Life by misadventure.

In researching this review I found this awesome websight about Bruceploitation

Bolo Yeung Bruceploitation
This entry was posted on Friday, May 28th, 2010 at 12:09 pm and is filed under Martial Arts, Reviews. You can follow any responses to this entry through the RSS 2.0 feed. You can leave a response, or trackback from your own site.

33 Responses to “The Clones of Bruce Lee”