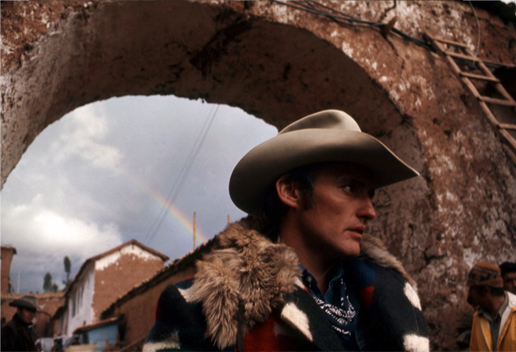 I never feel qualified to write eulogies, but Mr. Hopper’s contribution to movies in general and to the kind of shit I like specifically is pretty fuckin huge, so I feel like something should be said.

I THINK what I’d like to do is take a moment to acknowledge some of the many Dennis Hoppers we loved throughout his career. 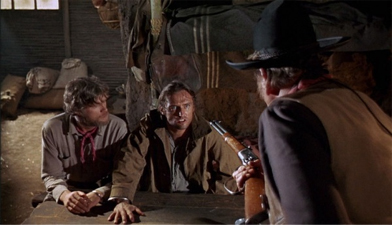 WESTERN BIT PLAYER DENNIS HOPPER: I’m always surprised to see young Hopper show up in a group of bandits or prisoners in a western. He’s in GUNFIGHT AT THE O.K. CORRAL, FROM HELL TO TEXAS, THE YOUNG LAND, THE SONS OF KATIE ELDER, HANG ‘EM HIGH and TRUE GRIT, plus many a cowboy tv show including but not limited to “Cheyenne,” “The Rifleman,” “Wagon Train,” “Bonanza” and “Gunsmoke.” 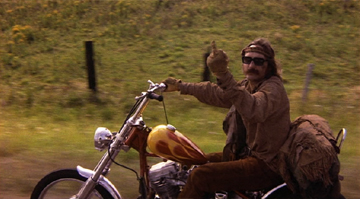 PIONEERING INDEPENDENT FILMMAKER DENNIS HOPPER: Obviously he wrote and directed EASY RIDER, that’s the big influential one. But he still had the bug later on, every once in a while he would pull it together to get a movie made. COLORS was a big one in the late ’80s, kinda cheesy if I remember right but one of the earlier attempts to portray the L.A. gang phenomenon on film, plus one of the first hip hop soundtracks (with a memorable theme song by Ice-T). 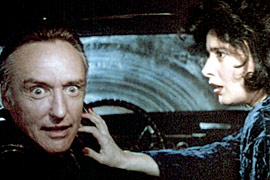 CRAZY MOTHERFUCKIN DENNIS HOPPER: I’m guessing this is the most beloved incarnation of Dennis Hopper around these parts. In the ’80s he delivered several all-time-great roles as nutcases. One of course was in BLUE VELVET, where his oxygen mask wearing rants inspired the screen name for one of our regular commenters here. There was RIVER’S EDGE where I believe he carried an inflatable dummy around as his wife. And there’s the one that’s dearest to my heart, the heroic lunatic Texas Ranger “Lefty” Enright in THE TEXAS CHAINSAW MASSACRE 2. He’s the one guy who not only had the balls to invite himself to the massacre, but to actually take on Leatherface in a chain saw duel. The scene where he tests out the feel of different saws while the old store owner watches is one of many classic scenes he has in this, one of my all time favorite movies.

RESPECTED VETERAN DENNIS HOPPER: In the ’90s he used his elder statesman character actor status to add credibility to a bunch of indie movies and the crime movies that were popular at the time. Some of the more successful ones were THE INDIAN RUNNER, BOILING POINT, RED ROCK WEST, BASQUIAT, JESUS’S SON and of course his tour de force head-to-head monologue battle with Christopher Walken in TRUE ROMANCE (also one of his most lovable roles, even though what he’s saying is kinda racist). 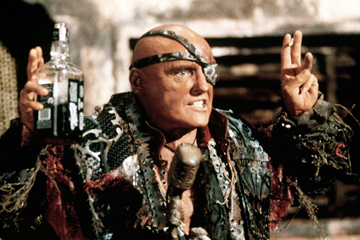 CULT MOVIE WEIRDO DENNIS HOPPER: I guess Chainsaw 2 could be in this category too. This is the Dennis Hopper that starred in offbeat genre movies (some of them mainly interesting for being huge misfires) like SUPER MARIO BROS., WATERWORLD, SPACE TRUCKERS (I almost rented that last week but went with ROBOT JOX instead… maybe next time), and his funny post-apocalyptic Donald Rumsfeld character in LAND OF THE DEAD. 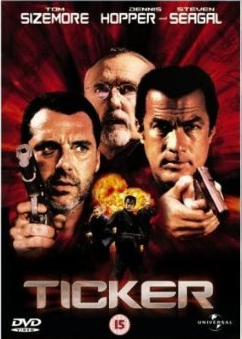 ACTION MOVIE/MAD BOMBER DENNIS HOPPER: Okay, this isn’t actually a huge category, but you know I gotta say it. One of his signature roles in the ’90s was as the villain in one of the best DIE HARD inspired movies SPEED. I think that kind of revived his career but in the way where he ends up doing a ton of roles in movies that aren’t necessarily that good. Unfortunately I must admit that one of those is TICKER, Seagal’s cheapest looking (but not worst) movie ever, directed by sometime outlawvern.com commenter Albert  Pyun. Hopper obviously filmed his role in a day or so and sports one of the worst Irish accents of all time. But I forgive him.

ONE THING that most of these Dennis Hoppers have in common: a touch of madness that doesn’t overpower the sympathy you have for him. He had a knack for playing lovable assholes. He could be completely evil but make you laugh. You’re saying “I love this guy!” even as he’s terrorizing you.

I guess the last things I saw him in were that goofy Larry Bishop biker movie HELL RIDE and, I’m sorry to say, AN AMERICAN CAROL. But he was still working recently, doing that TV series version of non-Cronenberg CRASH last year. He looked good, and really didn’t seem to have aged at all in the last 15-20 years. I wouldn’t have guessed he was 74. I hope that means he didn’t have too much pain until this last stretch here.

And he seemed happy. He went through the whole drug culture without too many scars, he stayed true to himself, worked with many interesting artists in many different eras and movements, went back and forth between inaccessible art-for-art’s-sake and commercial mass culture entertainment and everywhere in between.

Looking through all those different Dennis Hoppers (and I’m sure there are plenty of others I didn’t list) you can’t deny he had a hell of a career. We could’ve remembered him fondly for any one of those, and he did all of them.

So it’s sad to see him go and a little hard to comprehend him not being around to pop up in 5 or 6 movies a year anymore. It seemed like he’d always be here, you know? But it’s also nice to look back and see what a hell of a career he had.

Good job Dennis, thanks for the laughs.

So, everybody, let’s take a minute to honor the man. Please tell us about your favorite Dennis Hopper roles or what you liked best about him.

Dennis Hopper
This entry was posted on Saturday, May 29th, 2010 at 4:35 pm and is filed under Blog Post (short for weblog). You can follow any responses to this entry through the RSS 2.0 feed. You can leave a response, or trackback from your own site.