I was thinking the other day: I wonder if super hero movies are the westerns of our time? A genre that’ll dominate for a while and then after a generation or two of being done to death it’s put off into storage, except for special occasions, like the fancy silverware. If so then I think we’re a little early with all these super hero deconstructions, these different versions of “what would really happen if somebody tried to be a super hero?” WATCHMEN and the upcoming KICKASS are the expensive, fantastical versions of that kind of idea and then there’s this slew of low budget indie ones like SPECIAL, DEFENDOR and MIRAGEMAN.

MIRAGEMAN stars Marko Zaror, the Chilean martial artist. If you’re not familiar with him his claim to fame used to be that he was The Rock’s stunt double in THE RUNDOWN. Then, like Tony Jaa over in Thailand, Zaror and his team decided to start making movies, first the fantasy KILTRO and then this. He also has one called MANDRILL playing the film festivals and he’ll be in UNDISPUTED III with Scott Adkins. 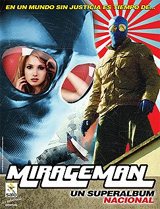 Apparently Zaror is only 6 feet tall, which surprises me because he looks huge in movies. Luckily he’s got more going for him than apparent size. One reason he’s unique is that he doesn’t seem to want a macho persona. In KILTRO he plays some kind of shy goth kid with giant pants, eyeliner and a backpack who turns into a super warrior. In this one he’s another emotionally vulnerable (but more conservatively dressed) manchild. He barely talks at all – it’s 12 minutes in before he says a word, and then it’s just answering the phone “Yes.” I think the scene where he’s interviewed on TV is the only time he uses complete sentences.

Zaror plays a bouncer at a strip club whose parents were killed by street thugs. So he’s like (SPOILER FOR BATMAN MOVIES) Bruce Wayne. But the thugs didn’t stop there, they beat him up too and raped his little brother who was so traumatized he’s in an institution. That’s right, he’s like (SPOILERS FOR DEATH WISH 1-2) Paul Kersey too. He’s not planning revenge or anything, but he’s a martial artist, that’s his passion. He trains all the time, he’s got lots of trophies. Then he’s out jogging at night and he hears a scream. He runs into a guy with a ski mask and decides to kick him out. Then he takes the mask, puts it on, goes into the house and beats up some guys who have a woman tied up. Then he leaves.

This type of story is like coverage of the Iran hostage crisis – it’s old news. (You like that one? I’m trying to get accepted into Fat Albert and the Cosby Kids.) But I like that he really has no interest in revenge or crime fighting. It’s just kind of a spontaneous thing. When his little brother sees reports about his masked adventure on TV the poor kid gets excited and his condition starts to improve to the point where he even leaves his room. So what the hell – Marko makes a costume, sets up an email so people can contact him for help like they would for– well, not a super hero. But maybe the A-Team or The Equalizer.

But super heroing ain’t easy. He has some problems. The first time he tries to change into the costume before going around the corner to confront some thieves in an alley it takes so long it’s amazing the guys are still hanging around. And the first people that email him for help really just want to lure him in so they can beat him up. But soon he’s pitted against a foe more terrible than the Joker or Lex Luger: they’re called The Pedophilia Network.

(attention parents: tell your kids not to play Mirageman on the playground. Otherwise one kid gets to be Mirageman and everybody else has to be the Pedophilia Network.)

The opening is pretty gritty, makes you wonder how much of something like this really could go down. They shoot it very plain and real, and the scene I mentioned with him changing the costume is completely unglamorous. It’s a practical costume made out of real clothing items, not some fancy sculpted rubber or nothing. And the movie has a dark sense of humor that I like. There’s a running joke about an ordinary fat dude who calls himself Pseudo-Robin and keeps writing emails and talking to reporters saying that he wants to be Mirageman’s sidekick and that he’ll loan him a motorcycle. The actor is so deadpan it seems like this guy could be real.

But when Zaror fully becomes Mirageman it switches to a broad comedy, he’s running around in the mask doing absurd comic book poses, and the soundtrack turns into an overly slick studio musician approximation of blaxploitation funk, including congas, wah wahs and a huge brass section. It seems kind of more sarcastic than cool when they pair that sound with this routine imagery of fighting guys on top of roofs and man-on-street interviews (shit – even Death Wish the book had to interview people on both sides of the vigilante issue. Time to retire that one).

So all that takes away from the sense of realism. Not to mention the video game type setups – they’re always making excuses for why the bad guys attack one at a time. And he has to get past them to get to the prize, the kidnapped reporter or little girl tied up at the end of the maze like that girl that was tied up when you get to the top of the screen on Donkey Kong. It’s pretty corny and the tone is too off-balance. I like the serious earlier stuff better than when it really gets into it.

So the movie’s only okay, but I like to watch Zaror fight – in fact I like to watch him act. So I’ll check out anything he does in the future, unless they don’t allow him to fight or act. I guess it could be a documentary where he doesn’t fight but they still interview him, maybe he has something interesting to say, I don’t know. Anyway, point is, keep an eye out. He’ll do better. It’s not a mirage.

Marko Zaror
This entry was posted on Tuesday, April 6th, 2010 at 2:12 am and is filed under Action, Comic strips/Super heroes, Reviews. You can follow any responses to this entry through the RSS 2.0 feed. You can leave a response, or trackback from your own site.