Once every 7 years, in a different town each time, high stakes gamblers run a secret competition where the world’s greatest assassins all try to kill each other and the last one standing gets ten million dollars. With that premise and generic title this doesn’t sound like the kind of DTV I would like. And with Ving Rhames and Robert Carlyle starring I have to wonder if this was intended for theatrical release, which could also be a bad sign. We don’t want another EDISON FORCE on our hands. But the great Scott Adkins (UNDISPUTED II, SPECIAL FORCES, etc.) is in this so I’d been keeping my eye out ever since I spotted it on his IMDb page. It was released by the fucking Weinsteins with their pain in the ass exclusive deals (how the fuck do I get my friend to watch MARTYRS if he can’t find it anywhere?) so I didn’t know it came out until I got some emails about it. Two different people said it was even better than BLOOD AND BONE, which I’d pre-emptively declared best DTV action movie of the year. 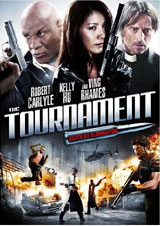 One way I knew BLOOD AND BONE was gonna be special was that the opening scene hooked me. Honestly, that doesn’t happen in most DTV, but it happens in THE TOURNAMENT. It’s the last legs of the Tournament and it’s come down to three guys: one wounded and dying, one Ving Rhames out of bullets, the other one some evil guy who’s taunting Ving. You can tell some serious shit has gone down because the walls are literally covered in blood, the place is on fire and a crazed zebra is loose in the building. Okay, the zebra I made up, but still, I appreciate the chaotic scene that’s set here.

Suddenly Ving spots some dead person’s assault rifle across the room and knows it’s his only chance, so he runs and does a TRANSPORTER style floor-slide, lubricated by the huge puddles of blood and guts left in the Tournament’s wake. Also there’s a part where Ving leaps over something using the medium of the stunt double. That was a funny idea.

The main story takes place 7 years later, and Ving returns to the Tournament because somebody in it murdered his wife. By the way, a tip for the world’s greatest assassins: you don’t need ten million dollars. You are a highly paid professional as it is. I know you think you’re hot shit but if you enter the Tournament just for the money you’re a moron. Only do it for a good reason such as revenge.

To my surprise though the movie keeps Ving at a distance and develops two other protagonists: Carlyle as an alcoholic priest forced into the Tournament when he accidentally swallows one of their explosive tracking devices (long story) and Kelly Hu as a hit woman who tries to protect the priest. Her reasons for being in the game give it some good melodrama, they’re a combination of tragic, noble, self-serving and suicidal. I ended up rooting for both her and Ving even though they’re trying to kill each other.

Unfortunately Adkins (playing Yuri Petrov, another evil Russian) faces Hu right at the beginning, so you know he’s a goner. At least he gets in one fight with some of his trademark flying kicks and stuff, but they should’ve used him more. Same goes for Sebastien Foucan (the CASINO ROYALE free-runner and one of the creators of parkour). He’s in it longer than Adkins, but another parkour chase would’ve been nice.

Most of the other characters are obnoxious villains, but don’t worry, they die fast. It doesn’t hold back with the violence – lots of bloody bullet hits, face torchings, car flips, stabbings, explosions (both vehicle and human). The biggest action scene involves a gas truck chasing a city bus, exchanging gun fire and trying to run each other off the road while Hu and Foucan fight hand-to-hand in the back of the bus. Foucan jumps onto the bus from an overpass and swings around on the bars inside, so I’m tempted to call it parkour vs. kung fu. But then again Dirty Harry jumped off an overpass onto a bus and personally I don’t consider Clint to be a parkour guy. So that might not count.

It’s kind of cool how you think Ving is gonna be the hero, but it shifts perspective and in this section of the movie he’s The Terminator. And I like seeing Rhames playing a straight up violent badass again. The character is kind of a silly cliche (you can tell he’s a good hitman because he’s well dressed in a black vest and white shirt) but he seems to get into it. I enjoyed his scenery chewing in the climax where he confronts his enemy while overcome with emotion and a mortal wounding. He almost seems drunk.

The main villain gets it good, but he’s not really the kind of villain that’s fun to watch. He’s the kind who spends the entire movie standing at an evil table blowing alot of hot air while watching a bunch of computer screens. You also gotta keep hearing the two nerd tech guys talking real cocky about we have such and such online and we’ve lost visual contact and all that shit. And one of the guys I kept thinking was Devin Feraci from chud.com.

But I never got bored. Without a doubt this is topnotch DTV. I don’t agree that it’s the best of the year – I felt more connected to the characters and action of BLOOD AND BONE. It’s funnier and cleverer and both the hero and villain are good enough that I’m anxious to see them return in other movies. With THE TOURNAMENT I’d definitely watch a sequel, but I’m not gonna beg for one. Still, I can see why people would consider it best of the year, and it’s great to have more than one legitimately good DTV to argue over. (We’re still waiting on NINJA too, although I guess it opened already in Malaysia. And I’ll be seeing THE KEEPER very soon.)

DTV Kelly Hu Robert Carlyle Scott Adkins Sebastien Foucan Ving Rhames
This entry was posted on Monday, November 9th, 2009 at 12:54 pm and is filed under Action, Reviews. You can follow any responses to this entry through the RSS 2.0 feed. You can skip to the end and leave a response. Pinging is currently not allowed.

57 Responses to “The Tournament”