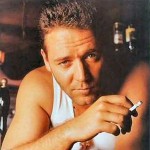 Well here it is, the big three oh and I’m sorry to say boys, I’m gonna have to say something that some of you won’t like. Although the gals probaly won’t mind. What I have to say is that Ridley Scott is not that fucking great, jesus fucking christ.

Now I admit, there are some good pictures this guy made about twenty years ago. One of them is Alien, a scary space movie which takes Yaphet Kotto’s character from Blue Collar into outer space. The other is Blade Runner, which is the one about the robot detective.

But I mean, there are alot of people who did something good twenty years ago. I remember I gave my old lady a ride to church one day, for one example. But that don’t mean my shit don’t need flushin and I feel the same can be said for Ridley Scott and his shit in my opinion. 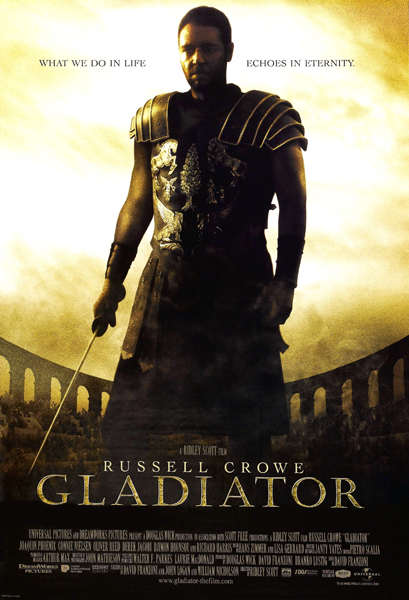 To be fair I guess I don’t fit into the usual demographic of the internet movie fan, or “movie geek”. For example I do not like hobbits. Ridley has another picture called Legend, which is about hobbits. So that is one of the reasons why the boys like him better than I do. Hobbits.

I guess I’m not a big fan of gladiating either because Ridley’s new picture Gladiator really isn’t as hot as everybody’s saying as far as I’m concerned. This is a picture about the fall of the roman empire and fighting a tiger. Russell Crowe plays Maximus, a heroic general in the roman army who is famous and loved because he is very good at committing the genocide against barbarians.

After 20 years of war, the old Caesar is near death, and feels kind of bummed about having killed everybody in sight and taken over their land in the name of peace. He wants to go back to a democracy and to peace, so he chooses general Maximus the renowned killer to become the next emperor. This is supposed to be a good choice over Caesar’s son Caesar, jr., the natural successor, because he is a puss who wants to fuck his sister.

There is alot of scenes there to show you that Caesar jr. is a puss so that you will hate him. First, he is gone for the entire war! Maximus is cutting dudes heads off right and left and this puss is out on vacation. Junior also wears makeup and blinks his eyes all girly like bugs bunny wearing fake eyelashes. And whenever Maximus gets the upper hand, he start to pout and whine and it seems like he’s gonna cry.

But then there is also one scene where he has his shirt off and practices his sword. This is because there will be a sword duel at the end of the movie so you have to show that he is only a puss enough for you to hate him, but not a puss enough for him not to have a sword duel at the end. This doesn’t give away the ending though because the idea is, that won’t be for a good 2 and a half or 3 hours so you’ll have forgot about the shirtless scene by then. Movie magic.

Anyway what happens is, after about half an hour, Junior finds out that Maximus is going to be the new emperor, so he kills his dad and has Maximus’s family killed and has his henchmen take Maximus out to some place to kill him. But he doesn’t even check up on Maximus enough to find out that he escaped, and just assumes he’s dead. So I guess it proves he is not a good leader. Then some guys capture Maximus and sell him as a slave to a guy with a pet giraffe. So now Junior is the emperor and General Maximus is a slave. You see?

But Ridley Scott doesn’t want just one ten minutes. He wants three or four of them. You’re just gonna have to be patient.

So eventually Maximus is a slave, and they make him fight as a gladiator. He fights real good, because he is not a puss. That is why you like him. He is supposed to get killed off in the first match but he becomes so popular that Emperor Junior has no choice but to turn him into a good guy. Then he gets more popular than Hulk Hogan and he tries to start a revolution for revenge and then he has the sword fight with Junior, etc.

The basic story is good in the same way zorro is. Everybody likes a good slave getting revenge on the faggy emperor story. That is what americans like. But the problem is, this is a movie about fighting, where there is no good fighting.

Now believe me, I have been in alot of fights. And in my opinion, fights are exciting. When you break a bottle over a man’s head, or stab a man in the balls with the sharpened edge of a pudding can, or whatever, you get a certain adrenaline rush. I would think sword fighting or tiger fighting would be the same. But in this picture, I don’t know WHAT the fuck is going on. So it is hard to get excited. You almost wish the motherfuckers would stop fighting and start talking about politics again.

For example, there is a scene where some guys come out on chariots. And Maximus says, “Gang, we gotta stick together! We work together as a team and we can defeat these bitches!” Or whatever.

And then, I don’t know WHAT the fuck happened. The chariot flipped over and I thought, “I wish I knew how they did that.” There was a tall guy, and a black guy. Then they were fighting (?) Not 100% sure what happened in that scene. Something having to do with gladiators, if I understood correctly.

This is how I explained it over on rec.arts.current-films. Remember in Enter the Dragon, there were two main guys, Bruce Lee and John Saxon. Bruce Lee was a real life karate master, and John Saxon was just some white actor.

Well when Bruce fights in the movie, they go all out to show how amazing he is. They show all his kicks, his punches, they get all the movement and the dude looks great.

But John Saxon, that white motherfucker can’t fight worth shit. So all the photographing is in real close, you can’t see his arms or legs hit anything and you just have to assume he’s doing some good fighting out there past the edges of the screen.

Gladiator is a whole three hour movie of John Saxon fights, so you can only give it the benefit of the doubt that there is some kind of good action scene going on there somewhere. For all I know these motherfuckers aren’t even holding swords.

I guess this is what the kids like in action movies, such as Armageddon. It is a more abstract type of deal where you can’t tell who is standing where or what in fuck’s name they are doing, so you can interpretate it more like a poem or painting. It goes back to that old deal that people say about Psycho, that it is scarier because the violence is off screen. Now they do the same thing with action movies, it is more action packed because you can’t make out any of the action.

But jesus, that don’t mean I have to like it.

Not that the movie is totally lacking. I kind of liked the big stick it to the man scene where Maximus got to reveal to the emperor that he was still alive and plotting his revenge. Also there is a scene when he wiped his snot on his dead wife’s toes.

But gimme a fuckin break pal, this movie is not the best thing since sliced bread or Ghost Dog and it will not stand the test of time. Maximus is not a great Badass because as far as I know he didn’t even do anything badass. In order to be a great Badass you gotta have one or more of these qualities: extraordinary fighting skills, unbearably powerful presence such as Clint Eastwood, cocky attitude and quiet but with occasional excellent comebacks, or just look really intimidating even while holding a violin or umbrella.

The only one Maximus has is (I think) the fighting skill, but I can’t tell what exactly he does so it’s not that impressive. I mean for all we know the guy is cheating. If the camera’s not gonna show specifically what he does then I’m not gonna get excited. Send us a better demo reel bud maybe we’ll talk.

So – there’s not great characters, there’s not great action, add those two together in a gladiator picture and what you get is not a great gladiator picture. No offense to my boys Harry and Mo over there at the ain’t it cool news but the chances of them still thinking this is better than Alien two years from now is the same chance of me getting to meet Abraham Lincoln.

What I mean is there is no chance. (Abraham Lincoln is dead, he was assassinated by John Wilkes Boothe I believe, in a balcony.)

I guess gladiating is pretty cool though if you think about it, thanks guys.

Ridley Scott Russell Crowe
This entry was posted on Monday, May 15th, 2000 at 8:16 am and is filed under Action, Drama, Reviews, Vern Tells It Like It Is. You can follow any responses to this entry through the RSS 2.0 feed. You can skip to the end and leave a response. Pinging is currently not allowed.