So I decided fine, you want to test my loyalty? Then I’ll watch your cartoon. We’ll se where that gets us. And I rented his DTV cartoon presentation ROB ZOMBIE PRESENTS THE HAUNTED WORLD OF EL SUPERBEASTO, allegedly directed by Rob Zombie (although the cartoonists might disagree, I’m not sure). 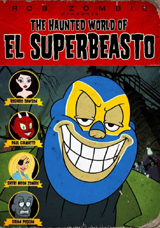 ROB ZOMBIE PRESENTS THE HAUNTED WORLD OF EL SUPERBEASTO is a wacky cartoon about an oaf in a Mexican wrestling mask who’s supposed to be some kind of celebrity and is trying to stop a devil (Paul Giamatti) who he bullied in high school from fucking a girl with 666 on her butt (Rosario Dawson) and turning into a giant devil monster. Technically that counts as a plot, but nobody here seems interested in telling a real story. Obviously they just wanted to draw bouncing titties, Nazi zombies, talking gorillas, robot dicks, and caricatures of Universal Monsters and Jack Nicholson in THE SHINING, and this was the way they figured out to connect those dots.

The drawings are your basic TV cartoon following the Ren and Stimpy/Spongey Bob example. Nothing original or that great. The jokes are your randomness-with-occasional-pop-culture-reference style. It really seems like a show that kids could watch if not for the constant boobs and cunnilingess and molester uncle who farts rats. But if I’m not mistaken boobs have already been shown in animation. Zombie is not exactly Charles Lindbergh breaking the sound barrier on that one, in my opinion.

It’s got the Zombie stamp on it, though. You got your horror host intro, your black and white horror movie credits, your voices by Sheri Moon Zombie, Danny Trejo, Brian Posehn, Dee Wallace, Geoffrey Lewis, Ken Foree (as a talking cat/porn director), etc., plus cameos by Zombie characters Captain Spaulding, Otis Driftwood, Banjo & Sullivan, Morris Green, even Michael Myers. And he re-uses the name Dr. Satan. Sheri Moon Zombie actually seems very at home as a cartoon voice. She plays an eye-patch wearing doppelganger of herself who is introduced stealing Hitler’s head from werewolf Nazis. I actually got a few laughs out of her robot sidekick who transforms into vehicles that she controls using his johnson. The joke is that he can’t admit he loves her and she doesn’t realize she’s turning him on when she sits on his face and tugs on him.

Dawson (who you may not remember was in DEVIL’S REJECTS, because her scene was cut out) is also game as the skanky stripper kidnapped by Dr. Satan. The character’s not all that funny, but she gives it a shot. I like when she’s being kidnapped by a cyborg gorilla and she screams, “Can somebody get a monkey off a bitch?!”

The movie is mostly dumb bullshit, but I did really enjoy the songs by the comedy duo Hard ‘n Phirm. The nonsensical concepts are much funnier when explained lyrically, and sometimes the songs almost seem to criticize the movie itself, like the one that complains they probly didn’t ask DePalma and Stephen King if they could rip off CARRIE. I think the biggest laugh I got was during a catfight animated to look real sexy, when Hard ‘n Phirm started singing that it’s okay to masturbate to cartoons because they do it in Japan every day. Then it sort of turns into a patriotic plea for Americans to catch up with Japan on that.

So, on the strength of those songs I’d say ROB ZOMBIE PRESENTS THE HAUNTED WORLD OF EL SUPERBEASTO averages out to mildly amusing overall. Not terrible, but you can’t help but think jesus, you spent a couple years making this? WEREWOLF WOMEN OF THE SS had me worried, HALLOWEEN II brought me back into the “with” camp, but the not-as-goodness of the director’s cut pushed the needle closer to “against.” This is just tedious but inoffensive enough to nudge it to neutral. So we’re starting with a clean slate on the next one. Wow me, Zombie.

Brian Posehn Dee Wallace Geoffrey Lewis Ken Foree Robert Zombie Rosario Dawson Sheri Moon Zombie Tom Papa
This entry was posted on Thursday, January 14th, 2010 at 12:10 am and is filed under Cartoons and Shit, Reviews. You can follow any responses to this entry through the RSS 2.0 feed. You can leave a response, or trackback from your own site.