From the beginning on it keeps dropping hints about what  might be up. A sinister past for Zahn? Maybe it’s straight up and this scary couple here are killers? Or this nice couple? Or the other couple? You’ll have alot of theories throughout and as long as you consider the correct one at some point you can claim you figured it out and defeated the movie. The writer/director is David Twohy, famed chronicler of Riddick. It’s another solid B-movie notch on his belt – nothing transcendent, but effective and fun, with some clever touches. 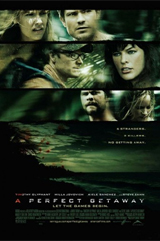 You hear right away that Zahn is a screenwrtiter and you think uh oh… director stand-in. Could get self-indulgent. Could get embarrassing. Does he think we care about his Hollywood problems? But it turns out to be mostly self-effacing, at least the way Zahn plays it.

Timothy Olyphant might not have been the very best of the DIE HARD villains, and he really didn’t work for that HITMAN thing, but he’s generally pretty good, and here’s one where his presence and performance really elevate the movie. He plays a guy they run into on the hike who helps them get past a scary part on a cliff. Next thing you know he introduces them to his girlfriend and the two couples are hiking together.

Because he’s a screenwriter they talk about movies a little bit, and you get some postmodern business where they’re talking about red herrings and stuff… you get it? Because this is a movie we’re watching, and it– well, I think you get. I thought this was kind of funny because I seem to remember Olyphant had to do that in SCREAM 2 also. But here they don’t lay it on too thick. Olyphant’s got a real good character that keeps you guessing – he seems kind but cruel, menacing but goofy. Sometimes he seems like kind of a dumbass, sometimes like a mastermind setting up traps. He claims to be a badass special ops guy, tells some stories, and it’s said twice that he’s “hard to kill.” Whatever he really is he knows his camping shit and his bowhunting, so it’s got that classic city boy/country boy tension. You know, this guy might be a murderer, and if so he’ll have all these skills that I can’t compete with. Or he might not be a murderer, but he’ll make me look like a sissy, because I don’t know how to set up a tent or whatever.

Harry Knowles wrote in his DVD column, “I really liked about 3/4s of this movie, and then it made me want to flip it off.” I don’t get it because the part that he is rudely gesturing at is clearly the part of the movie that makes it original. Also he doesn’t specify if he wanted to do a full-on double flip off or just one handed, or why it is that he wanted to do this but did not actually achieve it. Anyway, I’m gonna have to SPOILER this shit so please abandon this review if you haven’t seen it yet. 100% spoiler material from here on out.
.
.
.
stop reading.

The genius of the switcheroo is that it convinced me it was a fair trade. Okay, so I was going along with this couple, and suspicious of Olyphant, but to learn that he’s actually the victim here is kind of a relief. It’s like okay, good – I wanted to root for this guy anyway. And his girlfriend seems so nice, it would be sad if he was a psycho and she’s one of these trapped-in-a-relationship helpless girls. This is good news. Plus, he has that special forces training, right? And he’s “really hard to kill.” Before that was a threat hanging over our head, now we get to switch sides and say, “Shit, bring out the special forces training!” We get to wish for asskicking instead of dread it.

I mean, I liked those two enough that I briefly considered if it was possible to make a sequel with them. But that doesn’t make any sense, unless it was the same characters in an unrelated adventure that’s the first part of a planned trilogy. But I doubt that’s something David Twohy would ever be interested in doing.

So many thrillers leave the big reveal for the very end. I like how this one comes out earlier – it re-arranges everything and sets the stage for a big chase. And at the same time it’s using flashbacks to explain what’s really been going on it also sets up a new romantic subplot that makes the movie end on a surprisingly sweet note. I feel like you gotta admire the construction of it, the way it tricks you, leaving out the beginning or ending of a conversation so it seems totally different when you see it in context later on. It’s like a Mad Magazine fold-in!

Anyway, a solid, enjoyable thriller. We need some of these every once in a while. Good work Twohy.

David Twohy Milla Jovovich Steve Zahn Timothy Olyphant
This entry was posted on Wednesday, January 13th, 2010 at 2:49 am and is filed under Reviews, Thriller. You can follow any responses to this entry through the RSS 2.0 feed. You can skip to the end and leave a response. Pinging is currently not allowed.

61 Responses to “A Perfect Getaway”