Well, say hello to the bad guy. The wet blanket, the party pooper, parade pisser, Gloomy Gus, Whiny Waldorf, Joyless Jim, Bum-out Benjamin. I’m talking about me here, the guy who achieved the dubious record of “First Person Not To Like [REC] Very Much.” Sorry guys. Didn’t think it would be me, so I didn’t prepare a speech.

If you’re not familiar with it, [REC] is the ’07 Spanish horror picture already remade in the U.S. as QUARANTINE. It’s a fakumentary/found footage one like BLAIR WITCH, CLOVERFIELD, THE OFFICE, etc. The premise is that a TV hostess and her cameraman are doing a story on firefighters when they respond to a building where a deadly 28 DAYS LATER type infection (zombies except in name) breaks out. They get trapped in the building and document the mayhem because the people have a right to know or whatever. 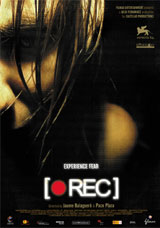 It must’ve been inspired by that documentary crew that happened to be following some of the firefighters responding to the World Trade Center on 9-11. But I’m kind of glad that the protagonist just does some fluff show instead of us having to watch a serious journalist or documentarian being preachy. Her show is “While You Were Asleep,” so she’s showing what these firefighters do at night. For the American remake they should’ve had it star Dave Attell.

It’s all well executed. Acting is good, feels pretty real, horror shit escalates, cool looking thing at the end. So I’m not arguing against it. I guess this approach just doesn’t work on me anymore, so let’s try to figure out why.

After so many of these fake video movies you start to see that there’s a formula, or at least the gimmick of pretending it’s a real video forces it into a formula because you feel you have to explain the same things every time. You have the opening where you explain why they’re originally filming (documentary about urban legend, student horror film, video for friend who’s leaving) and everything is normal, they do non-horror shit for a while (interview locals, put on mummy costumes, hang out at a party) but the the shit hits the fan (weird sounds and objects left at camp site, Statue of Liberty decapitated, zombie apocalypse). Then they have to explain why they’re still filming (“Someone has to know what happened here!”). Usually somebody (annoyed friend, pushy soldier) tries to get them to turn off the camera, so they say that it’s off but it’s still on, heh heh, sneaky. At some point the camera does stop or mess up (end of tape, battery dead, accidentally bumped button) so the story can skip over some time. Toward the end they learn more information about what’s going on (in this one it’s that old classic The Wall of Newspaper Clippings) and then they come face to face with the big danger and the tape ends before you find out what happened. Spoooooooky.

Just once let’s see one where everything is resolved on camera. “As you can see we killed all the zombies. Tune in next week when we’ll visit a bottling plant!”

Of course, I’m not against formula in horror, in fact I recently reviewed a slasher movie that I said could’ve benefited from being more formulaic. But I think there’s a difference between slasher formula and this. In a good slasher it’s a nice smooth vehicle to carry you along. Sometimes you can forget it, but it’s in your subconscious so when the movie deviates from the usual path it’s a nice surprise, it tricked you. With a fakumentary I can’t stop thinking about the mechanics. Like when a little girl plays with the camera I know it’s a way to include a conversation they wouldn’t have intentionally recorded. The little girl wouldn’t play with the camera in a normal movie, because it’s a scene put in only to justify the existence of another scene. In a non-fakumentary you don’t think about the cameras, you subliminally accept them as your eyes or your window into this world. With a fakumentary the formula is not just the story structure but also the excuse for the camerawork, a constant reminder that it’s all fake.

I also have a problem that I’m constantly distracted by the realism, judging would she really say it like that, would he really do that with the camera there, would he really care about filming at this point, etc. It’s supposed to make it feel more realistic but to me it can have the opposite effect because I can accept more stylization if it’s not pretending to be real footage. [REC] does fairly good on that score (way better than DIARY OF THE DEAD, that’s for sure) but it’s still a drawback to this type of storytelling for me.

Instead of reality it ends up feeling like some kind of a performance, like “hey, check out this Youtube video where they set up all this stuff to happen in one shot.” Clever, well done, but for me (and apparently only me) it’s distracting and I just don’t find it scary anymore. The novelty has worn off. You gotta put a bigger gimmick in there to make it wortwhile, like CLOVERFIELD was a Godzilla type movie done in that style, I can get with that. DISTRICT 9 was a very original story that could’ve worked without that presentation but also used it to make some satirical points about the media and racism. This one doesn’t seem new enough to me. Just more zombies or demons.

That’s another thing, I don’t really understand or buy this zombie virus/demonic possession combo. I guess I was no longer mentally invested enough to really pay attention by the time they got to all the explanatory newspaper clippings. It kind of seems like one of those video games or viral promotions where you gotta piece together a bunch of clues to figure out the backstory. I guess it’s pretty cool to do it that way, if I really gave a shit what was happening by that point I would’ve expended the effort to understand it.

The thing is, if it was the same story told in the traditional way I don’t think I would want to watch it, and since my interest in the method of storytelling has worn off there’s nothing left. I’m not against gimmicks, but this gimmick is not enough for me.

The thing at the end looked cool though.

Sorry everybody. Didn’t mean to let you down.

another fucking found footage movie fakumentary
This entry was posted on Monday, October 19th, 2009 at 8:16 pm and is filed under Horror, Reviews. You can follow any responses to this entry through the RSS 2.0 feed. You can skip to the end and leave a response. Pinging is currently not allowed.