TROLLHUNTER starts out exactly like any one of these post-BLAIR WITCH fakumentaries: 3 somewhat obnoxious college kids are making a documentary (about a bear poacher?) when they stumble across something scary (a troll) and shine some lights and cameras around the woods at night getting spooked by sounds and shadows. So it’s first time actors pretending to be non-actors trying to catch something on tape and we’re supposed to sit at home watching it and pretending we think it’s real so we can be scared if they “happen” to catch something scary blurred out on the camera for like 2 seconds.

Do you guys remember, they used to make low budget horror movies and they were still real movies with scripts and tripods and everything. It seems like if Sam Raimi started today then THE EVIL DEAD would be about Bruce Campbell going around in the woods with a video camera, and at the end he almost sees a Deadite but the tape ends. If James Cameron started today then Sarah Connor would be making a documentary about time travel and only at the end would she catch a quick glimpse of Arnold. If George Romero started today, NIGHT OF THE LIVING DEAD would be DIARY OF THE DEAD. This era sucks.

I kind of hated these kids, they’re following around this poor hunter guy that tells them like six times to leave him alone. And they keep spying on him because they think he hunted a bear without a license. A half an hour in they finally see what he’s really hunting and it’s a hilarious looking 3 headed troll. I thought it was great but I still almost turned it off because I figured okay, I get the joke, it’s exactly like all the other movies exactly like this except instead of an occasional ghostly apparition it’ll be an occasional funny troll guy. 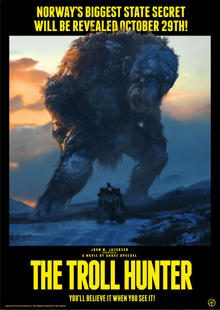 Well I’m glad I kept going because although they should’ve cut that opening half hour down to 1-2 minutes of explanation it gets much better when they ditch that bullshit and the guy admits he’s a troll hunter for the Norwegian government.  We learn about the different types of trolls, the ways to trick them, the ways to kill them, the ways the government covers up their existence. There are all these rules about trolls, for example they can “smell the blood of a Christian man,” so the kids have to keep swearing to the hunter that they don’t believe in Jesus. And when they get a new camerawoman who’s a Muslim they’re not even sure if that works or not, it’s never come up before.

There’s a troll that hangs out under a bridge. There’s a PROJECT GRIZZLY-ish troll protection suit. Also it turns out that trolls are really, really stupid and that they like to piss all over everything.

It’s an absurd concept treated seriously. The hunter is very droll and casual about it all. The funny parts are well timed. There are some good character moments like after the first troll attack when the girl is just giggling gleefully about the idea that trolls really exist. Then later everybody gets uncomfortable when she’s losing it so much that she makes fun of the other people for believing in trolls.

The effects are excellent. The designs of the trolls are really cartoony, but then they make them look real. I believe it’s all digital, and they’re much bigger than guy-in-a-costume size. You see them a bunch, too. It’s not like they’re always on screen, but you see them quite a few times and sometimes for long stretches. For example the humans get stuck in a cave while some big-nosed fuckers are sleeping. Sure, alot of the scenes are written around what they could do for free (for example drive around pointing at electric towers and claiming that they’re really an electric fence to keep giant trolls contained) but it definitely gives you more to look at and enjoy than your standard fakumentary horror. I’m sure it’s probly a much lower budget than CLOVERFIELD, but it’s more comparable to that type of approach – an effects movie from the point of view of some kids with cameras, instead of (SPOILER FOR ABOUT 35 DIFFERENT MOVIES) some kids with cameras who see one very small glimpse of something at the end right before the tape ends.

Although I think TROLLHUNTER could’ve been finessed into something even stronger I do think it’s a very clever and entertaining movie that adds something unique into a worn out subgenre, and even does Norway proud by using mythology specific to their part of the world. It’s a pretty good movie.

I’m sure if they had finished their documentary about bear poaching it would’ve been pretty good too.

another fucking found footage movie fakumentary Norway trolls
This entry was posted on Saturday, September 3rd, 2011 at 12:08 pm and is filed under Horror, Reviews. You can follow any responses to this entry through the RSS 2.0 feed. You can skip to the end and leave a response. Pinging is currently not allowed.