On the other hand, I kind of love POLAR EXPRESS and BEOWULF and paid to see both of them twice in the theater. Never on DVD, but I’d gladly go back to see either if they were re-released in 3-D again. I love the strong atmosphere of these worlds that Zemeckis creates, and the way he moves the camera around them. I guess here he’s God and the only way He knows to show us things is through His perspective, so we can float through every crack or groove on a wall or hover high into the sky looking down on the settings and characters like they’re ants in our ant farm. 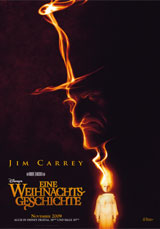 In the case of POLAR EXPRESS some of its flaws actually added to my enjoyment – it’s got kind of a spooky WILLY WONKA vibe anyway so I got an unintended haunted house kick out of the creepy, glass-eyed look of some of the characters. That doesn’t make up for the cameo by the Steven Tyler elf or the horrible song the kids sing on the back of the train, but still. I gotta admit I enjoyed the movie. And BEOWULF, I realized the second time watching it, actually has a real smart script to take us through its bloody, morally ambiguous tale of rollicking 3-D monster-fighting, demon-fucking adventure. Plus I have a strong personal belief that any 3-D movie where the hero bursts through a man-sized sea serpent eyeball while puffing out his chest and shouting his own name is a worthwhile artistic endeavor. That more than makes up for his hair looking like a doll’s and some of his friends not seeming to know how to make eye contact.

So now I find myself in a weird place because I’m seeing reviews of A CHRISTMAS CAROL and wondering what these people are talking about – it seems like they never noticed the flaws of the motion capture before, just now figured it out and are trying to throw all the sins of those previous movies onto this new, improved one. I guess it’s just me and good old positive Roger Ebert here, but without reservations I would say this is a genuinely good movie. It has what I liked so much about those other two while mostly wiping out the problems. Zemeckis finally found a balance with his characters – they look more detailed than, say, Pixar’s elegant designs, but they exaggerate reality instead of trying to mimic it. Scrooge, for example, has an impossibly long nose and chin like a caricature, and a hunched back that tapers into an unhealthily slim waist. Then if you look closely you can also see the blemishes on his skin and the peach fuzz on his nose (with one hair a little longer than the rest). It’s fitting that this was released by Disney, because what these characters look like is animatronics at Disneyland. I don’t see you pricks going after the Pirates of the Caribbean calling them lifeless zombies (and if you do I better not catch you).

Jim Carrey plays Ebenezer Scrooge, a miserly old man who hates Christmas. After the death of his long-time business partner Jacob Marley, Scrooge becomes nah I’m just fuckin with you obviously you know what this movie is about. There have been over ten thousand previous versions of this story on film, and a bunch of them are good. SCROOGE starring Alastair Sim is probly the best I’ve seen, although I think Bill Murray’s version in SCROOGED might have the most convincing transformation at the end (SPOILER). What makes Zemeckis’s version unique is that this weird ass mo-cap medium actually does bring you into the story in a way that hasn’t ever been done before – it embraces the satirical exaggeration of the story in a visual sense, but also makes it feel like a real place, like you’re really there.

Scrooge is such an icon that, like Mickey Mouse we get so used to him we forget to look at him sometimes. But when it comes down to it he’s not supposed to seem like a real guy you would know, he’s completely absurd (think of the scene where the guys come asking for donations for the poor and he talks about his love of prisons). So to exaggerate him visually is in a way more appropriate than a real guy.

But these cartoonified people are grounded in a reality. The way Zemeckis uses 3-D doesn’t so much shoot things out of the screen at you as pull you into the room with the characters. In the scene where Cratchit shivers at his desk trying to warm himself from a single candle I almost expected to see my cold breath in the air.

At the same time, I think A CHRISTMAS CAROL makes a stronger argument for this “performance capture” notion than the other two did. I got a laugh from BEOWULF’s Anthony Hopkins character, who just looked like an unnatural Anthony Hopkins. Why not just use live action for that? And with POLAR EXPRESS I don’t see why it couldn’t have been animated by animators. But in this case it’s a movie that follows the tradition of letting different actors (George C. Scott, Patrick Stewart, Michael Caine, Mr. Magoo) perform their interpretation of the character, but with an actor who wouldn’t be able to do it when limited to the powers of his own flesh and bones. Carrey is real good as Scrooge, but I don’t think I’d buy him doing it under a bunch of makeup. And Gary Oldman’s Bob Cratchit is much shorter than he is in real life (is Tiny Tim’s problem genetic?) but not as short as he was in TIPPY TOES. The magic of mo-cap!

I’ve read some complaints that some of the scenes in the movie remind people of a theme park ride. I don’t get that one. To me that’s part of what makes the movie fun and unique and worth paying the two extra bucks for the 3-D glasses. The story involves ghosts flying Scrooge around to show him things, you’re telling me Zemeckis shouldn’t make those scenes thrilling and cool? I gotta disagree. And I can’t afford to go to Disneyland every year, I’m not gonna complain if they bring it to me. Some of the ghosts reminded me of The Haunted Mansion, and that’s a compliment.

I mean it’s not like this is SYRIANA or something. It’s a traditional Christmas Eve ghost story, it makes sense to be swooping around. Just because we’re used to versions based around the limitations of the stage doesn’t mean it’s wrong to present it a little differently to take advantage of a different medium.

Other than the medium, though, it’s a fairly traditional adaptation of the story. The ghosts are a little spookier than in some versions, especially Jacob Marley, whose jaw comes unhinged during the conversation (an embarrassing thing to happen to a ghost). It’s fair to say that they don’t have enough scenes with Tiny Tim to fully develop that part of the story, but I didn’t have a big problem with that since we already know what his deal is.

While some people criticize it for telling the story slightly different from usual, others are down on even telling the story at all, saying we don’t need another version of A Christmas Carol. Well, we don’t need to eat sweet potatoes either, but I’m still gonna do it. This reminds me of our recent discussion of the PSYCHO remake and the debate about re-telling stories. I think A Christmas Carol is an example of a story so good that I like to see it told in different ways by different people every year. In my opinion it holds up. I guess it’s different from a remake because it started as a story on paper, so we can pick and choose which actors and images to associate with it and which tellings of the story are our favorites. Personally, I think this is a good one to add to the library. I might start thinking of some of these images when I think of the story, other people might not, and the story will live on.

Bob Hoskins Charles Dickens Christmas Gary Oldman Jim Carrey mo-cap Robert Zemeckis
This entry was posted on Monday, November 16th, 2009 at 12:51 pm and is filed under Family, Reviews. You can follow any responses to this entry through the RSS 2.0 feed. You can skip to the end and leave a response. Pinging is currently not allowed.