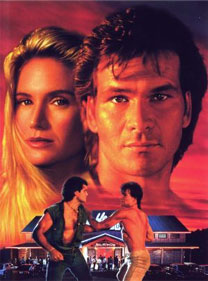 Well, we saw it coming, but it’s still a huge bummer to know that Patrick Swayze is no longer with us. I don’t want to rehash what I’ve said before but I think most of you guys know how I feel about his work and feel similarly. He became kind of a pop culture joke because of movies like DIRTY DANCING, but I admired him because of how dedicated he was to his roles and how unafraid he was of being corny. I think most, many or all of us here consider ROAD HOUSE to be a classic and completely unique, to say nothing of POINT BREAK where he gives an equally great performance. In both cases I’m convinced that he made himself believe the philosophies he was spouting in character. He really was Dalton and he really was Bodhi. Incidentally he also did a great job as a screen fighter and even did skydiving stunts for POINT BREAK.

I also enjoyed him in UNCOMMON VALOR and BLACK DOG, I know a guy who loves NEXT OF KIN, and yeah, I’m gonna have to check out STEEL DAWN one of these days. And I have planned for years to revisit RED DAWN (almost made it part of my back to school series but I want to watch it as a double feature with ROCKY IV since that’s how I saw it in the ’80s). I don’t think he was mainly thought of as an action guy, and yet he had all those on his resume.

Another thing I always think of when I think of Swayze is that Saturday Night Live sketch where him and Chris Farley were auditioning for Chippendales. I can’t seem to find the original on Youtube or I’d embed it, but it was amazing how sincere and sweet he made his character in that thing. He did a similar trick in the not particularly good TO WONG FOO, THANKS FOR EVERYTHING, JULIE NEWMAR.

Please share your Swayze thoughts in the comments or click on his name in the tags below to see my reviews of a few of his movies.

Patrick Swayze
This entry was posted on Tuesday, September 15th, 2009 at 1:05 am and is filed under Blog Post (short for weblog). You can follow any responses to this entry through the RSS 2.0 feed. You can skip to the end and leave a response. Pinging is currently not allowed.