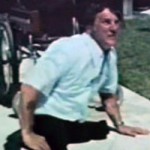 That does not sound exciting, but what if I were to tell you that Lou HAS NO LEGS? And in fact, I had to check IMDb to find out his name was Lou because he is mostly referred to as “No Legs”? What would you do then, smart guy? You would watch the movie is what you would do. 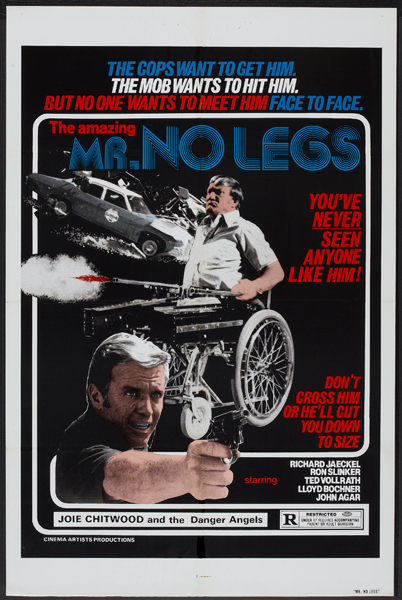 So he has no legs, but how does he get around, you’re wondering. Well he has a wheelchair just like any other guy with no legs, but it is a pretty good wheelchair because it has shotguns built into the armrests. It also has good places to keep his throwing stars. Now, at first I thought the whole power of No Legs was confined to the wheelchair. I mean anybody is tougher with two shotguns at their disposal, no matter how many legs they got. So while his awesome wheelchair may be empowering to some disabled arms enthusiasts, it is not enough to make this guy remarkable. He just has good taste in wheelchairs. Without the chair who is he? He gets driven around by his right hand man, Rance “without my sperm there would be no live action Grinch movie” Howard. I figured that was his weakness, if Rance is driving him around and they get stopped by some rivals, he can’t get to his chair from the backseat and he’s fucked.

Well, that’s what I thought, but that’s because I was underestimating No Legs. This guy is actually skilled in the martial arts. He is real good at punches and blocks and he can lift himself up with his hands. Many people probaly believe that having no legs is an advantage in the sense that you can focus on your handwork and never have to worry about stupid kicks. But No Legs doesn’t go for that bullshit. He uses his stump area to ram a guy more than once. Bruce Lee can probaly kick a guy better, but can he kick a guy while having no legs? I don’t think so. No Legs is good in his slo-mo fight. I would not say that he is necessarily a crippled master, because he can’t spin a stick or anything. But he’s better than me.

The guy who plays No Legs is named Ron Slinker, and apparently he wasn’t in any other movies. He was a good find though because he really does seem like a tough, ornery bastard who wouldn’t let the loss of his legs keep him down. I mean look at the guy on that poster, he looks like he would bite your nose off if it came to it. In the movie we don’t get the whole story about what happened to his legs, but it sounds like they got cut off as a punishment for fucking up. Can you imagine that? If you’re in the mafia and they send a message to you by cutting your legs off, would you want to stay in the game? If so, would you be able to pull it off, without losing any of your job responsibilities? I don’t think you would. But No Legs did.

This is kind of a freaky movie, there is some unusual shit that occurs. For example, there is an interracial catfight in a bar started by a racist white bitch. During the fight, both a midget and a drag queen are able to break bottles over people’s heads. Afterwards No Legs stabs the white bitch to death with broken glass, and we find out that she’s the mustache cop’s best informant. ‘Cause the good guys are a bunch of racists I guess.

The movie was directed by Ricou Browning, who played the Creature From the Black Lagoon in some of the sequels, and was apparently an Olympic swimmer. He has all the directing skill you would expect from an Olympic athlete who competed in any other event than directing movies. He actually specialized in aquatic movies, directing underwater sequences and what not. His first directing job was on Flipper. I don’t think he had his land legs back when he directed this one so it’s kind of goofy. But in a good way.

The only real problem with this movie is that No Legs is not the main character. In fact, I bet the movie wasn’t supposed to be about him at all, they only changed the title and marketing after they realized he was the best part of the movie. At the script stage he probaly just seemed like a colorful henchman, like the guy with the exploding hockey puck in THE RUNNING MAN. But you know how America feels about disabled people triumphing over impossible odds. You can’t help but root for this guy. For a while it seems like he’s an anti-hero, as he gets pissed at his boss for saying he’s gonna end up on the sidewalk with a tin cup full of pencils and decides to take over the gang. But it gets more and more about the cops and then 2/3 of the way through the movie No Legs gets killed. Then the last part is an endless car chase for a dirty cop. No Legs is secondary in everything but the title and the poster. And, come to think of it, our hearts.

This entry was posted on Monday, November 27th, 2006 at 2:03 pm and is filed under Action, Reviews. You can follow any responses to this entry through the RSS 2.0 feed. You can skip to the end and leave a response. Pinging is currently not allowed.

One Response to “Mr. No Legs”