The Wrath of Kahn

Recently using the “twitter” technology I “twittered” this one-liner:

“I love the wide spectrum of views in this summer’s sci-fi. TRANSFORMERS 2 and DISTRICT 9 show both sides of the racism issue, pro and anti.”

So today Aaron S. emailed to inform me that Joseph Kahn, the director of that movie TORQUE that I liked, has a new blog where he has written some against-the-grain views on those two movies. He seems to have a different idea than me about which one is pro.

I didn’t want to write this as an open letter and make a big deal out of it, but I couldn’t get the damn comment thing to work on his blog so what the hell, here is my long response to his post Transforming Michael Bay.

An interesting essay, Mr. Kahn, and I think some of your points have validity. But I strongly disagree with you on your conclusion that “the twins” are therefore not an ugly racist stereotype.

I’m not going to say whether or not Michael Bay is a racist. I don’t know him and wouldn’t want to. I doubt he sees himself as a racist (although he put his Bad Boys 2 director credit over a shot of a burning cross!) but that doesn’t change the fact that his movies are full of demeaning racial stereotypes (not to mention corny anti-gay jokes).

I like your point about Bad Boys being risky with two black stars. If that was Bay’s choice then you’re right, you can give him credit for that. But let’s not pretend like he’s doing The Fred Hampton Story or something. I don’t think you can deny there’s a Bamboozled minstrel show aspect to those movies, with Smith and Lawrence constantly having to joke about being “negros.” I don’t think that was Bay’s idea (that’s Lawrence’s trademark) but it’s still the movie he made and put his name on. He clearly didn’t know any better.

In part 2 Will Smith, after already having been nominated for an Oscar for Ali I believe, is reduced to using the n-word repeatedly while threatening to rape a kid for dating Lawrence’s daughter. In Transformers Bernie Mac calls his mother a bitch and says he wants to bash her head in with a rock. Anthony Anderson (in the same year he finally broke out with The Departed and Hustle & Flow) plays a donut-eating fat buffoon who keeps yelling at his grandma to shut up. When the authorities arrive his cousin is such a coward he immediately jumps through a window.

This is not so much racist humor as lazy humor. Bay’s movies are constantly trying to be funny so he goes for any cheap joke he can get and that often involves stereotypes and minstrelsy. But he breaks the camel’s back with the twins. You’re right about the “Cybertronian” detail but it doesn’t matter, the joke is still to say that these “black” characters can’t read. They also want to “pop a cap in that ass.” The slang is out of date because despite what you said at least one of them (I thought the credits said both) was voiced by Tom Kenny, the white comedian who also voices Spongebob Squarepants. His comedy style is hyperactive and full of wacky voices like Robin Williams and he shares Williams’ belif that imitating a black dialect is always funny. I don’t think that’s necessarily racist but it always makes me cringe. I think the subtext of that type of humor is to demean the black and hip hop culture you are trying to defend in your post. At best it’s a lame joke. 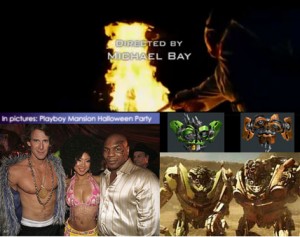 Another aspect you didn’t address is the design of the robots. To the extent that you can make out their faces under the horrendously overcomplicated designs they look like Sambos with stoner eyes, monkey ears and gold teeth. They’re the only robots with cartoon caricature faces, the rest (even the “what’s crackin bitches?” stereotype from part 1) just look like machines.

When I saw the movie it wasn’t a question of “laughing with or laughing at.” In the notorious “we don’t read so much” scene where you finally see their faces there was a gasp and then groaning and booing. Later there was applause when it seemed like one of them died, and booing when it turned out he didn’t. They are the Jar Jars of the movie, and I don’t think by accident. It’s a style of attempted humor where a character being annoying and stupid is supposed to be funny. In this case they are also “black,” so it’s easy to take as mean-spirited toward the movie’s idea of black culture.

Here’s what I agree with you on: most of the characters in Bay’s movies are ugly stereotypes. That’s what he thinks is funny. And I honestly think that after working with Martin Lawrence so much he probaly thinks that’s just how you do black characters. But I disagree that that excuses having characters like that in a movie in 2009, especially since they claim (whenever deflecting criticisms of the movie’s overwhelming stupidity) that it was made mainly for little kids.

Look, I’m a white guy, I’m not trying to speak for black people. But I’m not the hypothetical “fanboy” you’re talking to who doesn’t respect black culture. I’m not gonna be a jackass and list my credentials but if you read some of my essays you’d know. And to me there’s no getting around that that twins shit is straight up demeaning and racist. I don’t care if he’s just trying to make Soul Plane. The faces of those Jar Jars could be on a KKK pamphlet. There’s no excuse.

I hope he runs into Spike Lee at some industry even some time. Also I hope the Boondocks make an episode about this.

Anyway Joseph I’ll keep an eye on your blog, and I still like Torque.

p.s. check out this montage of Michael Bay humor.

As for his post DISTRICT NEIN, I agree with Joseph that the allegory is sloppy because of the oppressed minority being the immigrants. That’s not the same setup as South African apartheid, obviously, and that’s why I tried not to think of every single thing in the movie as symbolic of something else.

But I do want him to consider the point I made in my review about the documentary style. Most of the movie is a documentary from the human point-of-view. They don’t interview a single alien, they just show them digging through garbage and rioting. The fictional filmatists don’t think they’re racist, but then Wikus doesn’t think he’s a bad guy when he burns alien eggs and makes jokes about it.

It’s only when the movie finally leaves the documentary style that we see the family life and hopes of an alien. Christopher and his son are the only real good guys in the movie, but we’d never know that if it stuck to the documentary style. I think that’s the most interesting point of the movie. Otherwise I would agree with Joseph but I think if you see it that way it becomes not only an anti-racist movie but a critique of the way media depicts minorities.

(my apologies for the headline, I bet he’s tired of that one)

Joseph Kahn racism
This entry was posted on Tuesday, August 25th, 2009 at 1:45 pm and is filed under Blog Post (short for weblog). You can follow any responses to this entry through the RSS 2.0 feed. You can skip to the end and leave a response. Pinging is currently not allowed.