Now, part 2 is even more epic than part 1. This one actually has time travel in it. It skips back and forth between The New Adventures of Michael Corleone and The Young Vito Corleone Chronicles. Hell it goes all the way back to the motherland. Remember that villa where Michael hid out in part one, then he married a girl with no nipples and watched her get blown up? Turns out that’s Vito’s childhood hood, and that place Michael lived is where the OG Godfather lived, and killed Vito’s mom. 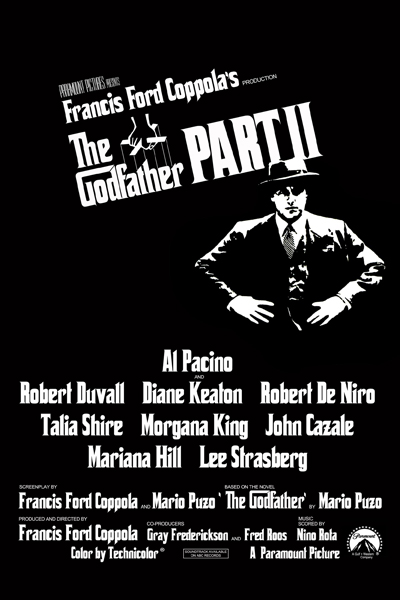 Obviously Copolla knew that although THE GODFATHER was a classic gangster movie, and probaly the greatest of all time, it was still missing something. He had Al Pacino in there, before SCARFACE and CARLITO’s WAY and, I don’t know, DEVIL’S ADVOCATE or something. But he didn’t have Robert Deniro. Copolla could sense that Deniro would be in ONCE UPON A TIME IN AMERICA, GOODFELLAS and CASINO, and almost in GANGS OF NEW YORK if you count Daniel Day Lewis acting like Robert Deniro as actually being Robert Deniro. So Copolla beat those chumps to the punch, he threw out that dead weight, Marlon Brando, and replaced him with Deniro as the young Vito Corleone.

It’s fun to see Deniro playing young Brando and even doing an imitation at times. Meanwhile, in a completely different era, Pacino continues with the hard ass performance as Michael, and it reminds you of how great he used to be, in a totally different way, before SCARFACE. I love him in Scarface because he’s so over-the-top, he’s like a cartoon character. He’s constantly yelling and he has that ridiculous accent. That’s the guy I usually think of when I think of Al Pacino. But here he’s usually quiet, it’s all in the cold stare and the confident presence. The way he sits there with his legs crossed very gentlemanly, but you know this guy is not a gentleman. His scariest moments are when he obviously knows something but doesn’t say it, like in the scenes where he’s figured out that his brother Fredo had something to do with the assassination attempt. Don’t get me wrong, I like over-the-top Al Pacino as much as the next guy, but it’s nice to be reminded of the more subtle actor he once was.

Robert Duvall is maybe a little smaller of a character this time around, but he does get to be the substitute godfather for a while. Congratulations Robert Duvall, you’ve earned it. Also he gets to use his lawyering skills big time, at a congressional hearing. I hope in part 3 they get to have a landmark Supreme Court case.

The jealous and untrustworthy Fredo is a huge part of the story here. The actor is John Cazale. Watching him in this made me think “That guy was in a bunch of good shit in the ’70s, whatever happened to him?” Well it’s a sad story my friends. I assumed he probaly had been in all kinds of shit since then but he actually died of bone cancer in ’78. This is his entire filmography: A short called THE AMERICAN WAY, then THE GODFATHER, THE CONVERSATION, THE GODFATHER PART II, DOG DAY AFTERNOON and DEER HUNTER. How’s that for a track record? Damn, a short career in movies but he sure made his mark.

Alot of people consider GODFATHER 2 to be the best sequel ever made, even better than BLADE II. Some even consider it better than the original. Best sequel? I can see that. But better than the original, I don’t think I agree. Don’t get me wrong, this is a great fuckin movie. And I like the epic feel. But I think it’s so ambitious it can’t really click as perfectly as the first one. You got these two storylines, jumping back and forth in time, showing two entirely different eras and generations. You got the o.g. mafia in Sicily and immigration, arriving at Ellis Island and getting started in crime. You got Las Vegas in the early days and the old house in New York two owners later and Cuba on the eve of the revolution and the Corleones testifying before the US Congress. I mean jesus they might as well throw in the Trojan War and the invention of the printing press. Maybe skip ahead a thousand years and show the Corleones on Mars. It’s all interesting, it’s all great, but it’s alot to swallow. And as far as I can tell, the two time periods don’t really have a strong thematic connection. Maybe if I watch the movie a couple more times I’ll realize I was missing it, but at least right now it doesn’t seem like the two storylines say much about each other. They’re just two separate stories about the same family.

THE GODFATHER PART I was an epic too but by comparison it seems streamlined and sleek. You got the don getting shot, getting sick, and eventually dying, and at the same time you got his goody-goody son discovering his destiny is in the family business and transforming from WWII vet to the motherfucking godfather part II. That’s what it boils down to so it’s more mythic.

Plus the first one has Marlon Brando. I didn’t mean what I said earlier about him being dead weight. That was a test to see if some of you fucks would nod your heads in agreement. You better not have. It was a trick. Marlon Brando rules.

Anyway the part of PART II that seems most mythic to me is the story that starts it off, the murder of young Vito’s family by the OG godfather and his escape to America. It’s so great in so many ways. In one sense, it shows how all this violence we saw in part 1 is a direct consequence of violence that happened decades ago on another continent. How the ways of Sicilian criminals were spread across the world. The Corleones wouldn’t even be in the US if Vito didn’t have to hide out to save his life. But the really exciting part is that as soon as they kill his father, you know that there will be revenge. The godfather even says it himself, he means to kill young Vito because if he doesn’t, he will grow up and some day want to avenge his father. So even though Vito escapes to America and has to grow up and turn into Marlon Brando, you know at some point, some way, he’s gonna come back and find that motherfucker and tie up some loose ends. So there is this great anticipation. And when it finally happens, the guy is so old and pathetic that it’s kind of sad.

You know, the more I write about what happened in the movie the more I think about how great it is. Better than the original or not, it sure is something. I don’t know man, I’m gonna go out on a limb here and say that THE GODFATHER PART II is a truly great movie. take that, suckers. TRULY GREAT.

IN YOUR FACE, NOT AS GOOD MOVIES.

Al Pacino Francis Ford Coppola Marlon Brando Robert DeNiro Robert Duvall
This entry was posted on Thursday, May 11th, 2006 at 1:15 pm and is filed under Crime, Drama, Reviews. You can follow any responses to this entry through the RSS 2.0 feed. You can skip to the end and leave a response. Pinging is currently not allowed.

16 Responses to “The Godfather Part II”