It seems like everybody involved in this movie is just doing it for a quick paycheck, but that’s okay. It’s still cool to see them all together in this weird little movie. Glenn Ford plays the guy who hires Connors, and he looks like he’s either retired or on vacation. He’s wearing shades and a white Adidas track jacket, and he’s only in a few scenes, sitting next to the swimming pool. I bet whenever Trenchard-Smith called “cut” he jumped in. It honestly seems like they either filmed it at his house or invited him on a fun vacation and then peer pressured him into shooting a few scenes real quick at the hotel. But it’s definitely worth his time because he gets to say the best line:

“We need a man who is bathed in the dragon’s blood. A man with little hazard of duplication.”
“Fleming, sir?”
“Yes. Yes, Fleming. The man for this job is Mr. Thomas Fleming.”

Fleming is of course Chuck Connors. And it’s true, because at 6’5″, with his freaky square jaw and blonde hair there is little hazard of Chuck Connors being duplicated. A cheap bootleg, maybe, but never an accurate re-creation. 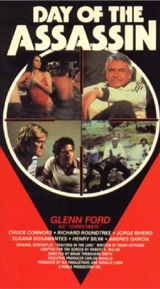 The story is all made up of things you’ve seen a million times before, but I like these kind of things. This Fletcher is a real smartass, he pretends to be a painter and plays dumb when other people call him out. He knows they know he’s lying and still pretends he thinks they don’t know just to fuck with them. He teams up with another guy so he can get the documents and the other guy can get the money, and they pull some of the ol’ OCEAN’S 11 type disguises and scams. My favorite part is when they’re disguised as workers, transporting the loot in a truck. The first time they get inspected they’re all in the back of the truck eating lunch, and they distract the cop by giving him food. The second time, Chuck’s partner just stands in the back smiling as the cops poke around. When they start looking where he doesn’t want them to he just pulls out a gun and pops them, never breaking his smile. Afterwards they joke about him enjoying shooting people. Somehow it still comes across as a pretty lighthearted movie.

But the undeniable highlight is an unintentional laugh. Roundtree dies when his car falls off a huge cliff. It’s shown in slow motion with a long, girly, hilariously un-Shaftlike scream dubbed over it. If I still had the tape I’d have to learn how to transfer that to digital and get it on Youtube, because the world needs to see this. The long, girly scream in itself is laugh out loud funny, but the idea that it’s supposed to be Richard Roundtree is incredible. Plus the car going off the cliff is pretty cool.

It also has a very enjoyable sort of disco/porn-funk score by some electric pianist named Bebu Silvetti. I swear I heard one of the main themes somewhere before, maybe sampled by somebody, but I couldn’t figure out where.

This one’s only on VHS, with a cover that made me think it was a TV movie. There’s alot of mystery about the credits because the box and IMDB both list Trenchard-Smith as sole director, but the actual opening credits give it to “Carlos Vasallo and Brian Trenchard Smith.” Vasallo is a producer but doesn’t have any directing credits on IMDB. Also, the box but not the credits or IMDB list “original screenplay ‘Traitors in the Lake’ written by Robin Estridge, adapted for the screen by Robert A. Miller.” Estridge was a TV writer but I can’t find any evidence of what this “Traitors in the Lake” was or why it was turned into this.

I don’t know man, it’s a pretty crappy movie and didn’t really keep my interest the whole time, but there’s something about it. I like those types of competing experts movies, it’s a good slumming cast and there’s just kind of a cool vibe to it. I think it would work well on one of those drive-in double feature DVDs that Dark Sky does. Or at least it could play at 2 o’clock in the morning on one of your local channels.

Brian Trenchard-Smith Chuck Connors Glenn Ford Richard Roundtree
This entry was posted on Saturday, May 2nd, 2009 at 1:16 am and is filed under Action, Reviews. You can follow any responses to this entry through the RSS 2.0 feed. You can leave a response, or trackback from your own site.

9 Responses to “Day of the Assassin”