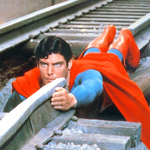 SUPERMAN: THE MOVIE (not to be confused with Superman: The Imitation Pasteurized Process Cheese Spread) is an important movie. It was the first big comic book super hero picture, and an early entry in the world of post-STAR WARS blockbusters that shaped today’s generation of filmatists. By casting Marlon Brando as Joe L. Superman (plus  Gene Hackman as Lex Luthor and Glenn Ford as Pa Kent), director Richard (LETHAL WEAPON) Donner set the precedent, still in place today, that big respected actors in supporting roles can add credibility to a super hero picture. And by casting only-one-movie-under-his-belt Christopher Reeve as Kal L. “Clark Kent” Superman he showed that sometimes a fresh face is better than a familiar veteran to play an iconic character. That later worked for Wolverine (whose first movie was executive produced by Donner), Thor and two subsequent Supermen. (Other actors who were supposedly on the producers’ wish list: Al Pacino, James Caan, Steve McQueen, Clint Eastwood, Dustin Hoffman and [why not?] Muhammad Ali. Any one of those would’ve automatically been a completely different movie.)
END_OF_DOCUMENT_TOKEN_TO_BE_REPLACED

Glad I did, though, because director Delmer Daves’s black and white take on the Elmore Leonard short story is a real gem. A small, valuable gem, not a big gaudy one like a rapper would wear. It’s just putting great characters in a tense situation and seeing what kind of conversations and relationships develop.
END_OF_DOCUMENT_TOKEN_TO_BE_REPLACED

It seems like everybody involved in this movie is just doing it for a quick paycheck, but that’s okay. It’s still cool to see them all together in this weird little movie. Glenn Ford plays the guy who hires Connors, and he looks like he’s either retired or on vacation. He’s wearing shades and a white Adidas track jacket, and he’s only in a few scenes, sitting next to the swimming pool. I bet whenever Trenchard-Smith called “cut” he jumped in. END_OF_DOCUMENT_TOKEN_TO_BE_REPLACED