Usually I prefer to wait to see a movie on the big screen, but when I saw an import DVD of ONG BAK 2 I just couldn’t resist. What on earth is that guy gonna jump off of or over in this one? Who or what will find their bones crushed by his bones? And the thought of that little guy running around on top of elephants… I don’t know man. I wasn’t gonna sit around waiting if I didn’t have to.

I think we all agree that Tony Jaa is the closest thing we got to a New Jackie Chan. Not that his persona or humor is the same or anything. But he’s an inhumanly great martial artist and stuntman whose movies make our jaws drop with feats of physical prowess and death defiance. They don’t make too many of those these days so it’s a big deal. I don’t know about you but I really hadn’t  quite had a “holy shit, a guy really did that!?” reaction like that since the heyday of Jackie.

I’m sure Jaa has had chances to come to Hollywood and skip forward to the current TUXEDO era of Jackie’s career, and fortunately he’s resisted so far.  Now we know he’s following his own path, because Jackie’s never directed an APOCALYPSE NOW style out-of-control epic. In his directorial debut Jaa went over budget, over schedule, disappeared into the jungle, showed up on some TV show crying, even scared the Weinsteins into un-investing (man, more people should try that trick). Eventually his mentor and director of BORN TO FIGHT Panna Rittikrai took over directing to hep him finish it up in a professional, non-fleeing-into-jungle type manner. The result is a sometimes crazy, always impressive traditional martial arts fantasy, sort of like APOCALYPTO meets CONAN THE BARBARIAN as produced by the Shaw Brothers. 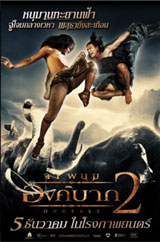 There’s one catch though: they figured an easy way to finish it up would be to, uh, not finish it up. It has a “cliffhanger ending” that’s really more of an abrupt stop. A narrator makes some questionable claims about the character’s “past deeds” putting him in this predicament and then asks us to save him like we did for Tinkerbell that one time when she was gonna die and the only cure was clapping. (that was before antibiotics I believe.)

But it’s a great movie until it ends.

If you haven’t heard, this isn’t really a sequel. It’s arguably a prequel. There are some parts where he looks at a statue which I assume is the same one from part 1, although I haven’t seen that movie in a long time. I remember it had the naive country boy in the big city, cheesy action movie criminals, underground fighting, the comic relief of Dirty Balls, lots of bone-breaking fights, impressive jumping, vehicle stunts. ONG BAK 2 takes place in 1421 so it has almost none of those things. But it does have a cameo by the guy who played Dirty Balls (he even makes a comment about “itchy balls”) and it does have fighting. Yes, I can definitely guarantee that it has fighting, I feel very confident in that statement. It has fighting on top of fighting beneath fighting wrapped in a thin layer of fighting, with fighting powder sprinkled around the edge of the plate.

The story is about a kid named Tien who wants to be a warrior but his dad makes him take dancing lessons instead. (Don’t worry kid, it’s like a football player taking ballet. It’ll help.) When their kingdom is under siege they get chased down on horseback, the dad gets sliced and shot full of arrows, but the kid sneaks away. He ends up captured by slave traders who find they are unsatisfied with the quality of his slavery and toss him in an alligator pit. Turns out the alligator pit was the right place at the right time for this guy because the leader of a notorious band of pirates sees the fight and is so impressed he helps him escape and takes him under his wing. You know, like “Hey man, I saw your alligator fight. I’m interested in representing you. Here’s my card.” One of those great “how he got discovered” stories you might see on a Coca-Cola trivia slide before a movie or on the IMDb.

These pirates are cool because they all have different costumes and specialties. They got a guy who looks like Lone Wolf and Cub, a guy who balances swords on his chin, a guy who shoots fire out of his hands, etc. I wish they went into their characters more, because this is a colorful ensemble here that they could do alot more with. But they teach him their techniques from all different schools. He learns different weapons, fighting styles, how to use explosives, magic tricks. And he grows up into Tony Jaa (SPOILER).

When Jaa comes into the movie it becomes all about testing. He has to fight different masters and prove his dexterity by running across a herd of elephants.He’s so badass he makes the elephants bow to him. And I guess the pirates must consider that a good endorsement because they appoint him their new leader.

Once he’s a super-warrior and pirate leader he figures he might as well take advantage of his new resources so he goes back to avenge the wrongs done to him earlier in the movie, tracking down the slavers and the assassins. Earlier it seemed like kind of a weird, free-flowing plot, but now all the pieces come together and the structure reveals itself, it was all setup for what he had to do and how he would do it.

The crazy stunts are what I love most about the Thai action movies, and if that’s you too then be warned that this has less emphasis on those. I guess you can’t exactly bounce off a moving truck in 1421. The most unique and impressive stunts involve the elphants – jumping or spinning off their tusks. There’s even a fight on top of an elephant. I don’t know if any of this is faked, but it looked real to me. You couldn’t do those scenes in the U.S., the Humane Society wouldn’t let you. In fact, the elephants wouldn’t let you, unless you were Tony Jaa. Tony Jaa has a huge following in the elephant community. 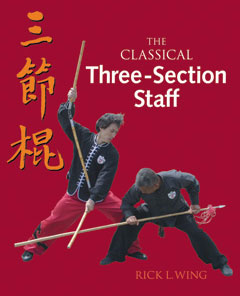 So I’m not sure this will be as impressive to the average joe on the street as part 1, but for people who like to watch martial arts on screen it’s an instant classic. The time and crazed dedication Jaa put into it really shows. He doesn’t just fight in his usual muay thai but also in different Chinese, Japanese and Indonesian forms. And best of all he uses a bunch of different exotic weapons, including the 3-section staff like Gordon Liu used in THE 36TH CHAMBER OF SHAOLIN. Now there’s a hell of a weapon! Nunchakas get alot of hype, and righfully so. But a guy who can use a 3-section staff is a guy worth putting in movies. Look I like Jason Statham, but let’s see him figure out what the hell to do with a big stick chained to two other big sticks. The guy would be lost. You’re not gonna see Statham with the 3-section staff, is my guess. Haven’t seen CRANK 2 yet though, I could be wrong.

I really like the other two Jaa movies and I actually thought the stories and filmatism were better than I had heard. But this is a big improvement. Before I thought Jaa’s girly looks and voice were holding him back a little, that maybe he came across a little bit too goodie two-shoes and country bumpkin to be a great action hero. Here he plays a character more in tune with the guy who smashes people’s faces with his knee caps. He looks crazed, sometimes possessed, almost evil. And the movie is courageously low on dialogue.

It’s also by far the best story of these movies. A good legend, not just an excuse to string fights together. A real well told story if you don’t count the part where it suddenly crashes into a wall at the end.

Get back to me after part 3, I guess. For now I love this one with only reservations about the ending.

adventure Panna Rittikrai revenge Thai action Tony Jaa
This entry was posted on Friday, May 1st, 2009 at 7:42 am and is filed under Action, Reviews. You can follow any responses to this entry through the RSS 2.0 feed. You can skip to the end and leave a response. Pinging is currently not allowed.