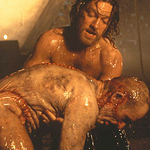 Branagh playing a beareded, wet-behind-the-ears college student while in his mid-thirties somehow reminds me of Chris Elliot in CABIN BOY. He’s a fancy lad who interrupts a medical lecture to argue with the professor about mixing medicine and philosophy. The teacher is outraged and the filmatism implies that he’s stickin it to the man, but personally – I don’ t know about you guys – I don’t take medical advice from Victor Frankenstein. 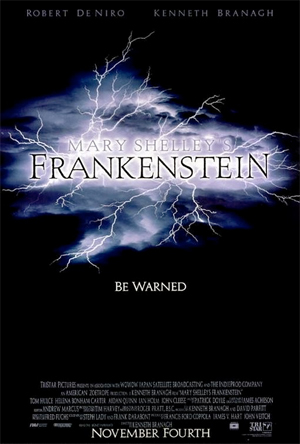 I also wouldn’t take his relationship advice. He’s in love with his adopted sister Elizabeth (Helena Bonham Carter, THE LONE RANGER). The only part of their childhood depicted is when he meets her and is told to treat her as his sister. Huge failure on that front. He wants to marry her, but keeps leaving her behind to study or do experiments or whatever comes up. It’s a movie with a histrionic style, lots of fast camera movements accompanied by frenzied music (by Patrick Doyle, CARLITO’S WAY). The creation scene especially seems like it could be inspired by DARKMAN, but if so it’s a humorless version of Sam Raimi. There are alot of scenes like Frankenstein arriving at the family mansion on horseback, Elizabeth and best friend (Tom Hulce, AMADEUS, Disney’s HUNCHBACK OF NOTRE DAME) and dad (Ian Holm, ALIEN, THE FIFTH ELEMENT) seeing him coming and running full stop toward him, screaming his name. They must’ve been pacing back and forth waiting for him with bated breath, he says like one sentence to them and walks away.

Coming two years after BRAM STOKER’S DRACULA, this was another lavish studio production marketed as a more faithful literary adaptation than other versions, but it’s got its own diversions. The script is credited to Frank Darabont (THE FLY II) and Steph Lady (associate producer, DOCTOR DOLITTLE [1998]) – I believe it was one of those times when they have two totally different scripts and they try to stitch them together (get it? But seriously). It’s one of those legends where Darabont says it was the best thing he ever wrote but not what ended up on screen. He seems to have an awful lot of those, but it’s very believable here because he says he wrote it to be subtle and doesn’t understand Branagh’s choice to go so over-the-top with it. Guillermo del Toro also backs him up, often citing a redo of Darabont’s script as one of his dream projects.

I remember thinking this was pretty good when I last saw it, in a theater 22+ years ago. Now I think it’s kinda bad, but interesting. Part of my problem is that it plays like Frankenstein is supposed to be a dashing adventure hero, but I think he’s a dick. I can’t play along with pretending he’s only a little misguided. He does this ungodly experiment because his mom dies during childbirth. He’s so upset about losing the woman who gave birth to him he’s gonna make birth obsolete, I guess.

In fact, one original addition to the creation scene is a giant bladder of amniotic fluid that pumps into the tank with the monster’s body. Victor personally shows up at a birth where he’s pre-arranged for the handmaiden to sell him a bucket. Considering the amount of fluid available to him in the lab he had to have done this alot – alot alot, because he has enough surplus to strike up the machine again at the end of the movie. You’d think that stuff would go bad. 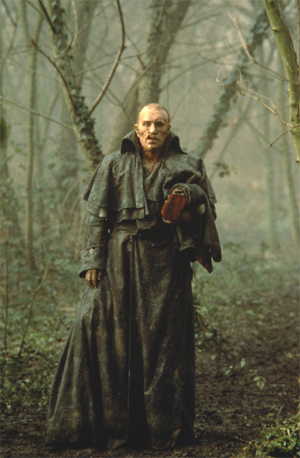 But the creation scene is cool and so are most parts of the movie dealing with the monster, played by Robert DeNiro (MACHETE) in legitimately disturbing makeup by Oscar-nominated Daniel Parker, Paul Engelen and Carol Hemming. His ability to teach himself to speak, and later belief that being made with body parts of criminals makes him evil, are two elements of the story that don’t translate well to a modern idea of plausibility. But the concept of this strong, confused and eventually philosophical dead person wandering around angry at his “father” is kind of scary. Again, he’s like Darkman: disfigured, powerful, wearing a long coat, hiding, ashamed of his face, lonely, vengeful. And I imagine if there were any disputes about toy elephants at the carnival that would not go any better than it did for Darkman, but fortunately for everybody it doesn’t come up.

The best part of the movie is when the monster hides out in a barn, secretly helps a family, meets the blind man (Richard Briers, WATERSHIP DOWN, SPICE WORLD). You root for him. But I also like later when he jarringly turns super villain. There’s a shot that was in the trailers where his hand suddenly covers Elizabeth’s mouth. I expected him to kidnap her and, you know, bring her into a burning windmill or something for the climactic showdown. No, he (SPOILER) rips out her heart and flops her on the ground and her hair catches on fire! I’ve seen this before and I still was not expecting that!

Of course this leads to Frankenstein chopping up and stitching up his own wife/sister to other dead bodies and spontaneously resurrecting her as a hideous, pained, pathetic, miserable monster who never asked to be given life like this. In my opinion this is like pretty much the worst husband and/or brother ever. He is so in the doghouse for this one that she seems to almost choose the disfigured All-Star Dead Criminal Body Parts greatest hits collection that murdered her over him. But instead she lights herself on fire and runs through the place spreading the flames all over the building (a beautiful fire stunt). This is a truly crazy rewrite of the ending. I gotta respect that.

But in the end I think it bothers me too much that the movie seems to be asking me to accept Victor as some kind of tragic hero. Sure, he went too far but what a great man he once was, blah blah blah. No, this guy is a self-centered douche who fucked his sister and then did weird things to her body after she got murdered. There’s nothing cool about this guy. And while his medical research was innovative, it didn’t accomplish anything. We might as well lionize the guy who invented the Cabbage Patch Kid that’s supposed to chew plastic french fries but it got recalled for eating kids’ hair. That seemed pretty cool at first too. You fucked up, Frankenstein.

Helena Bonham Carter Ian Holm John Cleese Kenneth Branagh Mary Shelley Patrick Doyle Richard Briers Robert DeNiro Tom Hulce
This entry was posted on Monday, April 3rd, 2017 at 12:39 pm and is filed under Horror, Reviews. You can follow any responses to this entry through the RSS 2.0 feed. You can skip to the end and leave a response. Pinging is currently not allowed.