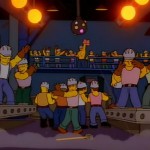 Now first of all I gotta admit upfront, I couldn’t make ass or tits of this picture. I didn’t get it. I know about that wave the french had over there. As in, I know they had it. I seen a couple of your Truffauts and I saw SEVEN DEADLY SINS once but that’s about it. So if you want to talk to somebody who knows what the fuck they’re talkin about when it comes to Monsieur Godard, I ain’t the one. Ask the cinemasters. There’s a couple good reviews of this on IMDb by people who know their Godards, so you can go to them for a perspective if that’s what you need.

However I do have one thing on those fuckers*: I read the book. The book is The Jugger, the sixth Parker novel. If you’re just joining us, Parker is a bad motherfucker who does robberies, institutional jobs, almost always in teams. He is good at planning and his specialty is improvising to solve problems when things go sour, which they always do. He gets crossed all the time but he comes out on top, partly because he is completely ruthless and emotionless. He sets his mind on getting back some money or protecting his identity, you better look out. (except at the end of this book, where he actually blows it!)

The most famous Parker novel is the first one, The Hunter, because it was the basis for POINT BLANK with Lee Marvin and PAYBACK with Mel Gibson. The Jugger isn’t as well known and in fact Richard Stark (through his associate Donald E. Westlake) sort of disowned it in an interview once, saying that Parker would never go out of his way to help an old man like he does in this book. Except actually he doesn’t, Westlake is remembering the book wrong**.

So here’s what the book is about: Parker gets a letter from Joe Sheer, an old associate, saying he needs help. The letter worries Parker, not because he cares what happens to the guy, but because he knows nobody in their right mind would expect Parker to come help them. He’s afraid the old man might be senile and risk blowing Parker’s “Charles Willis” name he’s been using for a while. So he goes to find out whether or not he’ll have to kill the guy.

When he gets there it turns out Joe is already dead, and there are various interested parties circling around because they believe he has money from old robberies stashed in or around his house somewhere. Parker doesn’t believe there could be much money left, but he plays along to find out who knows what about Joe’s past so he knows who he has to kill. Along the way various people do get killed, not all of them by Parker.

In MADE IN U.S.A. Anna Karina plays the Parker character, Paula. This is the only time anybody’s had a gal playing Parker, and I’m not against that. I even liked the part where she asked a guy which pair of shoes she should wear and then whacked him on the temple with the heel of one of her pumps.

The trouble is, having a name that starts with “Pa” is about the only thing she has in common with Parker. She is not even close to a bad motherfucker. She doesn’t look comfortable holding a gun. She is not menacing to anyone. And she does a lot of things Parker would NEVER do, including but not limited to:

some words that appear in this movie but not in Parker novels: fascism, communism, socialism, the Left, the Right.

I mean for crying out loud, Richard Stark must’ve been rolling in Donald Westlake’s closet when this one first unspooled. I haven’t read all the Parker novels yet but I’m pretty god damn sure there’s not one where he plays a game of “warm and cold” with somebody. This movie is full of cutesy crap like that, little word games and goofs like the actors face the camera and say the same lines at the same time or they narrate what they’re saying instead of just saying it (“blah blah blah,” I replied.)

The weird thing is, this really is based on The Jugger. There’s definitely a chunk of the plot intact. Instead of an old jugger being dead it’s Paula’s old lover. But the opening scene is pretty similar, with a guy named Typhus standing in for the book’s Tiftus. And the guy they got is the perfect French version of the weird little dude described in the book. The situation’s real different because these people aren’t bank robbers (everybody seems to be war veterans or political revolutionaries), Paula is not trying to protect her alias, and there’s no money. Instead she’s just trying to find out who killed the guy and why. But you got the pair of cops (at least I think they’re cops), one crooked. One she teams up with, the other she is interrogated by. You got a doctor. You got the mysterious other party who kills Typhus/Tiftus and she has to find out why. You got her blamed for Tiftus’s murder, and you got her and the cop giving each other fake confession letters as collateral so they can trust each other.

So there are many elements taken from the book, it’s just that there is not one fluid oz. of the essence of the character, world or tone of the book. Otherwise though, spot on I guess, in a way, sort of. Except totally different.

I mean obviously Godard doesn’t give two shits about the character of Parker. That’s not a surprise so we’ll accept that. Paula has nothing in common with the character who is the whole point of any of these novels, which leaves no reason to make this movie. Okay fine, we’ll roll with that I guess. But it’s still weird this movie exists because everything about it is the opposite of Richard Stark. Stark is tough and gritty, Godard shows pretty ladies in colorful dresses and nicely shot scenes with bold primary colors (especially the ol’ red white and blue). Stark is lean and mean and light on dialogue, Godard is slow and meandering and has people jabbering pretty much non-stop, except when occasionally they just move their mouths and no sound comes out. It’s a cinch to call Stark unpretentious, but definitely not Godard. The movie occasionally cuts to closeups of bullets piercing the word “LIBERTE,” if that gives you an idea. The art of Stark’s writing is how straight forward and clear it is, but Godard’s movie is called incoherent and incomprehensible even by his admirers.

Stark’s novels usually steer clear of pop culture and political references, while the movie has constant references to Walt Disney, Humphrey Bogart, Nixon, Kennedy, communism, fascism. You could probaly argue that there’s some mild satire in some of the books, like the way the crime syndicate known as The Outfit is run like a corporation. But if there’s any political or social commentary in there, and I’m not saying it is, it’s hidden in the story there. The characters sure as shit aren’t saying it out loud like they are in every other scene of MADE IN U.S.A. There’s even a couple long takes of a reel-to-reel playing some dude’s political speech.

All the political yammering must be native to France at the time, but the movie is supposed to take place in a French speaking Atlantic City, and Godard loads the movie with obvious symbols of Americana. Lots of pop art and pulp paintings of cowboys and billboards and crap. It reminds me of some American that goes to Chinatown and buys a bunch of bootleg anime memorabilia but doesn’t know who the characters are or what the writing says. Or people that think Australians ride to work in the pouch of a kangaroo, throwing boomerangs at koalas that try to mug them. Sorry bud, but no way nobody’s gonna believe this was really made in U.S.A. It’s clear the guy is fascinated with America and at the same time has no idea what the fuck it is.

I gotta say though. There is one part where Paula finds a “corpse” at a military hospital, and it’s portrayed by a bandaged skeleton with eyeballs. Not from the book really but always worth putting in a movie. That was the best part I think. Don’t remember much else.

Even if this one was easy to find (like if you’re in Europe), I would have to say it’s only for Godard maniacs and Parker completists. But the first group will be the only ones who might enjoy it. You know when somebody makes a painting or a song or something, shows it to their mom and all ma can say is, “It’s… interesting.” I think that’s what MADE IN U.S.A. is. Interesting. Just not in the sense that you are interested while you are watching it.

*UPDATE: actually, I forgot that there is a Parker-centric review of this movie on the web sight THE VIOLENT WORLD OF PARKER .

**Also, Andrew Miller wrote to inform me that in the original printing of The Jugger, Parker actually did go just to help Joe. But Stark always regretted it so it was rewritten at some point for the reprints.

Jean-Luc Godard Parker Richard Stark
This entry was posted on Monday, April 18th, 2005 at 8:33 am and is filed under Crime, Mystery, Reviews. You can follow any responses to this entry through the RSS 2.0 feed. You can skip to the end and leave a response. Pinging is currently not allowed.