(note: Marcel from Brooklyn points out that Wayne did get an Oscar for TRUE GRIT. So I guess RAW DEAL is supposed to be Schwarzenegger’s TRUE GRIT or something. I haven’t looked up if he got an Oscar for it or not.) END_OF_DOCUMENT_TOKEN_TO_BE_REPLACED 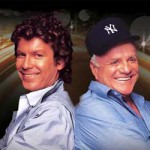 When a guy like me finds out there’s an ’80s action movie called HARDCASE AND FIST there’s pretty much only one choice: watch it immediately. The box says that Hardcase and Fist are cops who are framed so they have to bust out of Folsom to prove they’re innocent. That’s a classic arc, the 1980’s version of the hero’s journey. I was hoping of course that the characters would be named Detective Jack Hardcase and Lieutenant John Fist, but unfortunately there is nobody in the movie who is named, nicknamed or even referred to as Hardcase or Fist.

But I got a good idea that Hardcase is Bud McAll (the credits say McAll, not McCall) because he’s a cop so he has to make a hard case or something. And Fist would have to be Eddy, his heartsick, kung fu obsessed cellmate. Hardcase was a cop framed by his crooked partner and Fist was in a “Hey Joe” type situation where he killed the dude he caught his stripper girlfriend with. The movie opens on Fist, dramatically lit in his cell, going through all his badass kung fu routines as a low keyboard drones John Carpenterishly and the camera slowly pulls out. Meanwhile, we keep cutting to Hardcase as he approaches in the prison bus. END_OF_DOCUMENT_TOKEN_TO_BE_REPLACED