Can Jane Fonda Be Outdone? The Barbarella Remake… 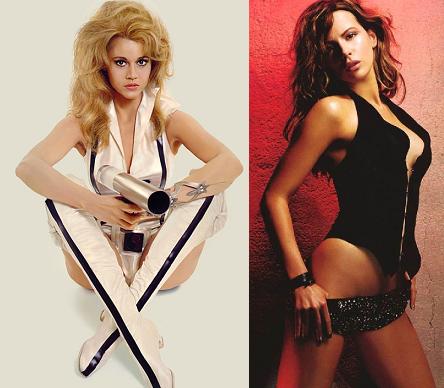 So the rumor now is that Kate Beckinsale is the frontrunner to play Barbarella in the new Dino De Laurentiis production. I’m pleasantly surprised if that’s who they’re going for. She’s not perfect, she’s no Jane Fonda, but I can imagine her doing a pretty good job. And I’m relieved to see they’re putting a few years between Barbarella and the Paris Hilton generation of actresses, the ones they got now that carry portable dogs and wear giant novelty sized sunglasses. You can’t have a Barbarella like that.

This might be saying too much, but nerve.com is some kind of sex magazine isn’t it, so I’m gonna go for it. Barbarella is, in my opinion, the sexiest movie of all time. Don’t get me wrong, I’m all for hardcore pornography, etc., and Barbarella is very tame. It only has a few teasing glimpses of boobs and the sex often involves pills or machines. (I know some people get off on watching girls screwin machines in pornography now, but that’s not my thing.) But something about the whole world of Barbarella, the crazy space costumes, the shag carpeting in her ship, the groovy psychedelic music… Shit, I’m not one of these sci-fi geeks, but if the technology was available I would consider running away with Barbarella. We could go ride around on that little ski sled thing, shoot some arrows together. I don’t think the leathermen are all that tough, and I could definitely kick away those fuckin killer dolls. I can’t fly, like Pygar, but eyesight… that’s gotta count for something. I think I could cut it in space. I could be a pretty decent space boyfriend, if I worked at it. Although I would feel pretty self conscious flyin around in a spaceship shaped like a dick. I might have to rethink this.

But to me Barbarella is not just about sexiness. I don’t think Jane Fonda gets enough credit for her performance in that one, and that’s the main reason why this new production is iffy. We got some beautiful women on this planet today but I don’t think we got many to rival 1968 Jane Fonda. And if we do, I don’t know what the chances are they got as good a sense for comedy as she did. Too many people play comedy like they know (or think) they’re being funny. Fonda plays that naive personality completely deadpan. The closest modern equivalent I can think of is Kirsten Dunst in Bring It On. Come to think of it she might be a good choice, but I’m glad they’re going for a little older.

The other thing that’s iffy — updating. They say this is not gonna be campy. What’s that mean, it’s gonna be a dark and gritty take on a sexy space chick flying around with a hunky blind angel? Are they gonna go into the real life psychology that explains why you can’t make love to an angel? Because all you need to know is that an angel is love. According to my nerd sources, the movie is a pretty literal (if slightly more jokey) translation of the kind of sexy psychedelic space shit that was in the French comic strips. You can’t put a leather coat and sunglasses on an angel and make him cool, is what I’m saying.

Still, I’ll keep an open mind for now. I’d like to see that weird space shit done with today’s technology. The opportunity is there to do a good movie. To De Laurentiis I offer the same advice I always give to somebody doing a risky remake, like Rob Zombie doing Halloween, or whichever asshole is doing Escape From New York. That advice is: DON’T FUCK IT UP.

This entry was posted on Thursday, April 19th, 2007 at 11:00 am and is filed under Other Sites, Vern Tells It Like It Is. You can follow any responses to this entry through the RSS 2.0 feed. You can skip to the end and leave a response. Pinging is currently not allowed.