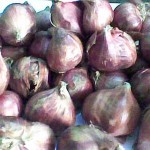 I know what you’re thinking. THE ONION MOVIE? Are you fucking kidding me? They’ve run out of ’70s slasher movies, TV series, action figures, video games and board games to turn into movies, now they’re moving on to the fucking produce department? Well to be fair onions are a vegetable with a rich history. In Caananite Bronze Age settlements, traces of onion remains were found dating back to 5000 BC. There is Biblical evidence (specifically the Book of Numbers) indicating that onions were grown in Ancient Egypt. In fact, to the ancient Egyptians (SPOILER) their concentric rings represented eternal life. So I think with a visionary artistic team behind the camera and a decent budget an onion movie could be a real eye-opener. Unfortunately this movie has nothing to do with vegetables at all, it is based on that websight The Onion with the fake news articles and the movie reviews and what not.

I watch more direct-to-video crap than the average citizen, but even I usually draw the line at direct-to-video comedy. If MEET THE SPARTANS can get a theatrical release and you can’t then I’m not sure I trust you, even if a renowned institution such as a National Lampoon’s or an American Pie Presents is willing to put its name on the line on your behalf. In this case The Onion is only putting its name on the line due to contractual obligation. Some of their former editors wrote this thing back in 2003 but they and the directors disowned it years ago and it was sitting on the shelf until recently when somebody was moving some boxes around trying to find some of their old yearbooks or something and their ass bumped it off the shelf and it lands in stores Tuesday. 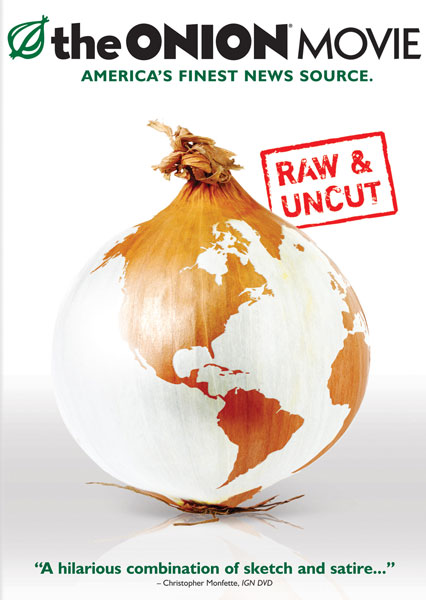 I’m no expert on laughs or satirical newspapers but as it happens I *am* an expert on Steven Seagal, who appears in the picture in the role of “Cock Puncher.” The format is a copy of sketch comedy movies like KENTUCKY FRIED MOVIE and AMAZON WOMEN ON THE MOON, mostly taking the form of an Onion TV news broadcast but also branching off into skits taking place in the homes of the people watching the show or behind the scenes at their news headquarters, etc. COCK PUNCHER is a new Steven Seagal movie we see advertised and it becomes a plot point when the head anchor has a fight with the corporation that owns The Onion over whether to report on unrest in Central Asia or on the phenomenon of “Cock Puncher Mania.” Then Cock Puncher somehow becomes a real person who shows up at the end to rescue the news from terrorists (long story).

Although like anyone I enjoy a movie where people get punched in the balls, this particular one is misjudged from the beginning. For starters, I think the sketch comedy movie is pretty much obsolete. When KENTUCKY FRIED MOVIE came out shows like SATURDAY NIGHT LIVE and SCTV were still pretty new. Parodies of TV and movies were not as worn out as they are now. They also had more production value and tons of nudity. And more importantly they had all the various trailers and segments padding one longer section, the ENTER THE DRAGON parody A FISTFUL OF YEN. So it didn’t feel as scattershot. Maybe you could argue that a bunch of skits strung together with a couple reoccurring jokes makes more sense for today’s pea-brained Youtube addicts, but I think they would rather skip around on Youtube than rent a DVD. So I don’t know about this one. From a movie you expect more than some skits. Maybe this should be THE ONION TV PILOT.

Another factor: part of why The Onion works is because they follow every detail of a real newspaper’s format. This movie doesn’t do as good of a job at mimicking the genuine article. The head anchor seems like a real anchor from the ’80s or earlier, but not from today. Unfortunately no news broadcasts have an anchor that old or who uses that style anymore. So it would’ve already seemed dated if it came out 5 years ago.

Speaking of dated, one of the reoccurring jokes is about a Britney Spears clone named Melissa Cherry. The whole joke is about how she says her songs aren’t about sex, even when they have titles like “Take Me From Behind.” I’m not gonna lie and say that I didn’t laugh when her video showed her getting doggystyled by a guy in a blue teddy bear costume, but this is not exactly cutting edge material.

But there actually are some really good concepts in here, and a couple good laughs, even if the execution could be better. If you insist on watching it you should skip these next couple paragraphs so I won’t ruin the highlights. My favorite was the bank robbery sketch. A guy comes into a bank waving a gun around, but when they try to give him money he insists he’s not looking for a handout, he wants a job. Then it goes through his whole career working at the bank, still holding a gun and wearing a nylon on his head, and with a plaque at his desk that says “Armed Gunman.” Another good sketch is the “What About the Children Foundation” commercial where a perfectly deadpan Michael Bolton shows you how your donations can help an African child to live a better life – which turns out to mean he gets his own bourgeois house complete with a security system and spends his time protecting his belongings and ignoring the plight of other poor people in his village.

They definitely make an effort to push the “edgy” buttons, dealing with racial stereotypes and taboo topics, but usually with some smarts. One sketch finds some uncomfortable humor when a group of friends get tired of the “How To Host a Murder” game and switch to “How To Host a Rape.” See, it’s got the shock value but it also makes a point about our maybe hypocritical reactions to different types of violence. Why is the “lesser crime” so much more awful than the other? I don’t really know but I’m with the girl in the sketch who decides to leave. I think unlike Melissa Cherry this one is a concept worthy of the Onion, so they shouldn’t be completely embarrassed of this movie. Also they can be proud that the cover shows an onion with the world map on it instead of an onion with an ass coming out of it like in recent advertisements. World 1, ass 0. Your move, ass.

So as far as 5-year old DTV comedy that you watch with extremely low expectations, it’s passable, or at least gets over quickly. But looking at this thing through the eyes of a Seagalogist it’s more of a bust. As UNTITLED ONION MOVIE it hovered atop Seagal’s IMDb filmography for pretty much the entire 5 years I spent writing my book SEAGALOGY (IN STORES JUNE 10TH MOTHERFUCKERS!) and as recently as a month or two ago I was still getting emails about “Have you seen this? Seagal is playing ‘Cock Puncher’!”. I never thought it would come out. Of course it was about 2 days after the book went to press that they announced a street date. (The movie’s only mentioned in an appendix.)

Fortunately there’s no need for in-depth analysis, this film adds little to our field of study. He’s funnier than in MY GIANT but gets less screen time. Other than the obvious use of a body double in one scene (wearing a motorcycle helmet) it doesn’t mimic the style of Seagal’s real movies. Most of the trailer has a different actor playing a younger version of the character before he learns the art of cock punching. In real Seagal movies there’s never been an actor playing a younger version. The big fight scene he’s in is more trying to copy KILL BILL than any Seagal movie. It’s clear that nobody cared enough to do more than a half-assed generic action movie parody. I know most people don’t care but personally I hate that kind of shit. A movie like HOT FUZZ is kind of cool because it clearly comes from people who know and love the conventions of the movies in detail. This is more somebody vaguely familiar with “karate movies” trying to make fun of them in the same way everybody else makes fun of them. (Except with the excellent Cock Puncher concept.)

For what little he does Seagal gives the best possible performance – he delivers his lines exactly as he would if this was a serious movie and not as if he’s trying to be funny (as he did in THE GLIMMER MAN). So he doesn’t smile when he whispers “Cock blocked.”

During filming, producer David Zucker was so happy with Seagal’s cockpunching that he announced plans for Seagal to star in a full-on action movie parody. I’m so glad it never happened, not only because the modern parody film is an artform arguably on par with those advertisements they put in front of urinals in public restrooms, but also because I don’t want him to become Leslie Nielsen and not try to be taken seriously anymore. Some of you people might not take him seriously but I do, and if he had become Mr. Comedy back in 2003 we would’ve missed out on more than a dozen Seagal DTVs including keepers like INTO THE SUN and URBAN JUSTICE. In the intervening years he has not specifically dealt with punching the cock but he has certainly escalated his War On Balls, especially in that legendary stairway scene in URBAN JUSTICE. (I have always reported it as 11 consecutive kicks to the balls followed by throwing a guy down the stairs, but recent studies indicate that it is a full dozen kicks with the final one being what propels the guy down the stairs.)

DTV Seagalogy
This entry was posted on Tuesday, June 3rd, 2008 at 10:14 am and is filed under AICN, Comedy/Laffs, Reviews. You can follow any responses to this entry through the RSS 2.0 feed. You can skip to the end and leave a response. Pinging is currently not allowed.