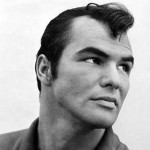 Friends, I don’t know if any of you are with me on this one, but just humor me for a minute and pour one on the curb for the video store. There are still plenty of them holding on and struggling, but the vultures are circling. More and more people prefer the instant gratification of download on demand or the not even close to instant gratification of ordering movies on a fucking websight and then waiting around for them to show up at some later date in your mailbox and then you will leave them sitting on your coffee table for two weeks and then remember that you got it and then watch part of it and send it back. But in my day, and still to this day, there was another part of the equation, the browsing. The hunt.

And it is only through this forgotten activity that you can have an experience like this one. You’re looking through the action section, trying to decide what you should watch:

I’ve seen alot of these. Not interested in a lot of these. Why is that one in the action section? I guess I’m not sure what section you would put it in. Oh, I forgot they did a remake of ASSAULT ON PRECINCT 13. That wasn’t very good. MR. AND MRS. SMITH? I never did see that one. Looked kind of good. Everybody said it was bad though. But there was that shot in the trailer, she was rapelling down the building and she had garters on, maybe I should–

Wait a minute, what’s this VHS box? Let me pull this one out and look at– 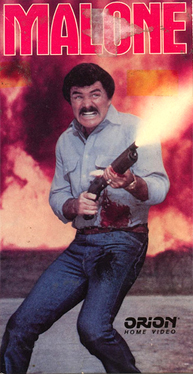 HOLY SHIT! How are you gonna find that shit on On Demand? How are you gonna hold that in your hand? You won’t find it on Netflix, because they don’t carry VHS, and MALONE only comes on VHS. DVD can’t hold Malone.

There are alot of good covers but I’m not sure if you can technically get better than this. Look at that shit! It’s Burt Reynolds. He’s blasting a shotgun. He has blood on him. He looks pissed. He exists in an environment made solely of earth and explosion. Mostly explosion. And his name is Malone! It’s everything you need, and nothing you don’t need. Simplicity and excess wrapped into one easy to swallow pill. Visual poetry.

Then I read the back of the box and it said he was ex-CIA and that it took place in “the Pacific Northwest.” I should’ve remembered that “Pacific Northwest” always means rural Oregon, and not Seattle. But still it was a worthwhile rental.

The movie is from 1987 and is clearly pre-DIE HARD. It might be the last moment in history when you could make a movie with Burt Reynolds drifting into a small town being a badass and fucking people up with his fists but without karate of any kind. He’s just passing through but, as often happens, his car breaks down and the small gas station he comes to will need a few days to get the parts needed to fix it. They are very polite in The Pacific Northwest so they let him stay in their guest room. It’s a widower and his teenage daughter, and there is lots of uncomfortable sexual tension between Burt and the girl. At one point she comes in wearing just a shirt and talks to him, it seems like she’s gonna make a pass but she just hugs him. And he accepts. Not cool, Burt. Get out of there. We know she’s under age because she says she’s younger than his 1969 Mustang.

Anyway I shouldn’t be calling him Burt, because he’s Malone.

We learn right away that some rich asshole named Delaney (Cliff Robertson) is trying to buy the gas station from Barlow, but he won’t give it up. Delaney has bought most of the town, has local drunks working for him, controls the police department, is widely feared, and even is connected with congressmen and the CIA. He’s basically pulling the exact same deal as Ben Gazzara in ROAD HOUSE except he’s also like the bad guys in AVENGING FORCE – the reason he’s buying the land is for a compound for his white supremacist militia! I didn’t see that coming.

But to Malone this is all about a gas station. The fat guy from Sanford and Son tries to pick on the girl because here dad won’t sell the station, so Malone kicks him in the crotch. Almost everything in this movie is completely generic, so I must give credit to the handling of the crotch injury. After the fight scene a doctor summarizes the injuries, saying “his genitals are still swollen,” meaning there may be permanent damage. This is great, because many genitals are kicked in movies, but rarely are there any consequences discussed. This is a sobering reminder of what a sensitive region the crotch is.

Anyway, the fat guy’s drunk brother (Tracy Walter) wants revenge for his brother’s swollen genitals, so he shoots up the barbershop and Malone kills him in self defense. So Delaney gets fed up and gets the CIA to send an assassin. But the assassin is Malone’s old girlfriend, so she won’t do it. (I forgot to mention that in the first scene Malone was in the CIA and left in disgust, etc.) So they kill the girlfriend. So Malone goes to the compound and kills everybody and blows the place up, the end. (SPOILER)

There aren’t really very good action sequences or anything but Reynolds is genuinely cool as a stoic tough guy and it’s interesting to see this precursor to ROAD HOUSE and to various Seagal movies. Sorry, I’m genuinely making an effort not to mention Seagal in every god damn review I write, but believe me, this has all kinds of Seagal tropes just a year before ABOVE THE LAW. Check out this badass dialogue to imply his mysterious blackops past:

Then there’s the PATRIOT-style militia, the UNDER SIEGE-like score by David Newman, and many of the same “outsider coming into small town” cliches used in FIRE DOWN BELOW. So I’m not stretching it, I swear.

What I liked best about the movie was one weird touch that I honestly can’t figure out if it’s intentional or not. See, the bad guys are these white supremacists, and it has absolutely no effect on the plot whatsoever. All the villainous things they do have to do with bullying people off of their land – they might as well be Ben Gazarra trying to control the town, or Kris Kristofferson trying to get away with dumping toxic waste in the river. Their idiology is never put into action. They never even use the N word. There are no minorities in the movie at all, so they never mistreat anybody due to bigotry or anything. Malone never gets self righteous with them or tells them off, and until Delaney gives him a big speech about “the pure race” and patriots and traitors I’m not sure if he even knows that’s what those guys are into.

The reason it’s so cool is because he has such delusions of grandeur. He thinks Malone came into town to assassinate him. No, seriously dude. His car broke down. A fat guy made lewd comments to a girl in front of him. It escalated from there. He didn’t come here to kill you, you just fucked up and crossed the wrong guy. (Malone.)

At the end when he makes that speech he’s so proud of himself, he’s gonna be a martyr for the cause, he talks about his network and how someone will just replace him and the movement will go on. I wanted Malone to say, “Look asshole, I don’t care about your cause. I’m killing you because you killed my girlfriend. This is not a martyr’s death. This is more like a domestic squabble.”

Does the movie live up to the cover? Not at all. That’s not even a screen shot. There is one explosion that big, so I appreciate that. It’s weird though because it’s based on a book called SHOTGUN, and the cover shows him with that shotgun, but I don’t think he ever uses one. Anyway, the movie MALONE is not as badass as that cover is. But the character Malone is. So I feel it is a victory for me, for Burt Reynolds, and for the lost art of browsing the video store.

Burt Reynolds
This entry was posted on Wednesday, June 4th, 2008 at 7:18 am and is filed under Reviews, Thriller. You can follow any responses to this entry through the RSS 2.0 feed. You can leave a response, or trackback from your own site.