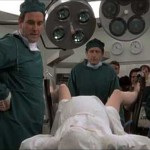 And then a 10 year old boy (the kid from X-Men 3 [playing a different character {I think I will stop mentioning what other movies they’ve been in}]) shows up at your apartment and tells you that he’s your dead husband Sean. Hopefully this hasn’t happened to most of you, so just try to imagine what it would be like.

At first you might laugh it off and not want to embarrass the poor kid, he may be emotionally fragile or something. But he keeps showing up and seems to know things. So you go to his parents to tell them to do something about it. And they yell at him but he refuses to say he’ll leave you (Nicole) alone. And then he faints.

So then you feel sorry for him again and invite him over so your family can quiz him and sort of prove to him that he’s not who he says he is. But he keeps passing all the tests.
I mean what the fuck are you gonna do? Is this an uncomfortable situation or what? Aren’t you gonna get creeped out? Not that you are gonna believe this kid is your dead husband reincarnated, but what would possess a kid to pull some shit like this? And how could he do such a good job? I mean jesus. The rational explanation is actually scarier than the supernatural one.

When I saw this premise explained in the trailer for BIRTH I thought it was about the most asinine thing I ever heard of. But when I saw it unfold on screen in the actual movie, I thought it was absolutely brilliant. This is a completely original and beautifully directed thriller that haunts you for days. It haunts you like a little kid who thinks he’s your dead husband.

And this is definitely a song in the key of Kubrick. Almost as if the director, Jonathan Glazer, has shown up at your penthouse apartment claiming to be your dead favorite director. And he knows things only your dead favorite director would know, like how to open a movie with an awesome tracking shot of a guy jogging through snow forever until he suddenly collapses and dies. I guess since Nicole Kidman is in there, and it’s this antiseptic world of rich New Yorkers, you definitely think of EYES WIDE SHUT. But the whole movie feels like Kubrick in general – the use of classical music, the deliberate pacing, the serious tone with just a hint of dark humor in its uncomfortableness, the confidence to tell a story you’ve never seen in a movie before, and to leave the audience never sure where the hell this is all going.

It doesn’t look or sound like a normal thriller and it never turns into one. It wraps things up with inevitability instead of a crazy twist. It leaves enough ambiguity that you might question your conclusions about what happened. And it asks you some uncomfortable questions, like what if the love of your life really did die and come back in a different body, should you be with them again? Or was it not meant to be? And aren’t you glad this isn’t gonna come up? And it gets even worse because for poor Nicole it not only pours salt on her old emotional wounds, it brings up secrets that she didn’t know about and probaly shouldn’t have. So mostly the movie leaves you feeling for Nicole Kidman’s character. It’s more emotional than your standard Morgan Freeman/Ashley Judd type thriller.

I recommend everybody check this movie out but afterwards, under no circumstances should you read what the chuckleheads on the IMDb message boards are saying about it. I mean I’m used to disagreeing with people on the internet but reading that this great movie is the worst movie somebody ever saw is a shitty way to come down from the high of discovering an amazing under-the-radar movie like this.

Nicole Kidman
This entry was posted on Thursday, February 21st, 2008 at 10:51 am and is filed under Drama, Mystery, Reviews, Romance. You can follow any responses to this entry through the RSS 2.0 feed. You can leave a response, or trackback from your own site.

One Response to “Birth”