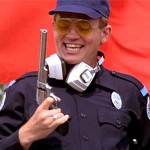 I don’t know if you ever do this, maybe this means I had a bad childhood or somethin, but every once in a while I see a weird old VHS box in the action section at the video store and I say “what the fuck is THIS?” and even though it looks like shit I have to rent it just to take a peek at some weird corner of the action cinema universe that I had not previously charted. I’m an explorer, is what I’m saying. The latest example of this is CRAZED COP starring a guy named Ivan Rogers. I will be impressed if any of you know who this guy is, because I asked around and only got blank looks.

First a visual of Ivan Rogers: an African-American gentleman of slightly above average build, with a mustache, likes to wear light colored suit and tie with dark shirt. If there was a movie about his life he could be played by Steve Harvey. But he doesn’t make any jokes in this movie, and doesn’t talk unless he has to. He has a dead-eyed stare and frown. His face betrays no emotion so, to show how depressed he is throughout this movie (or how crazed he is, I guess) he drinks lots of scotch and points a gun at his head 3 different times. 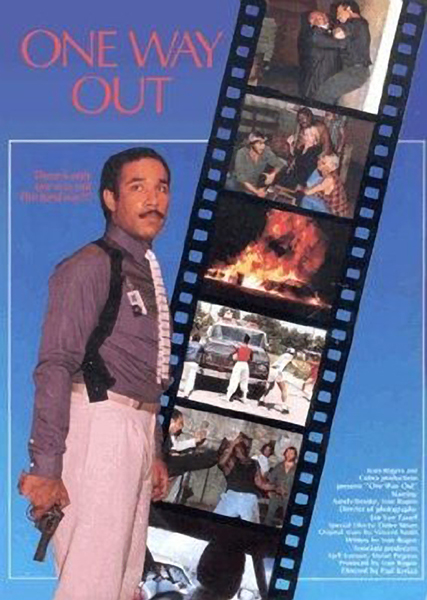 I thought his background would be a mystery, but luckily he’s still around so there’s ivanrogers.com. Turns out he was a professional kickboxer who was approached to create an instructional karate movie for videodisc. He wrote, produced and starred in it and did another one for the early days of VHS, and I guess after you do a couple instructional videos you wanna be Orson Welles. So after a few years of various kickboxing activities, screenwriting practice and encouragement from Fred “The Hammer” Williamson he decided to follow his dream and make this, the first Ivan Rogers vehicle, originally titled ONE WAY OUT but that was already a Sidney Poitier movie so it became CRAZED COP.

CRAZED COP is almost 100% generic except for the gimmick that it stars and is written by and produced by some dude you never heard of named Ivan Rogers. And instead of taking place in New York or L.A., or even Chicago or Detroit, it is shot in Indianapolis, Indiana. So you get to see what kind of crazy shit goes on in the Indianapolis PD circa 1986.

This came before LETHAL WEAPON, but is also about a dangerous cop who is suicidal because of the death of his wife who gets a new partner of a different race and background (fancy-dressing white female). But this character, Weeks, is not funny-crazy, he’s dead serious crazy. His wife was raped and murdered by hired thugs of a drug kingpin, so he’s going after that guy. And it turns out the chief of police is in on it too.

It’s got all the usual elements. He goes too far, plays by rules that could be considered to be his own, etc. He has to hand over his gun and badge, which he does without comment. He doesn’t give a shit because he’s got a pretty nice gun wrapped in a towel in his trunk, and he never really shows people the badge anyway.

The filmatism is amateurish, sometimes in aggravating ways. The movie tries to be real quiet and moody, with the same repetitive keyboard score looping throughout to create dread. There are lots of long pauses and unneccessary static moments before moving to the next scene. This can work if you know what you’re doing, but the camerawork and alot of the acting is not so hot. There are lots of long handheld shots just showing closeups of a glass of scotch, a photo on a table, etc. In fact, the climactic action scene is mostly closeups. It involves Weeks hanging onto the hood of the bad guy’s car while he drives on the freeway for about 5 or 10 minutes, and it’s one of those scenes made almost entirely of closeups of Ivan Rogers and some car POV shots, and only the magic of editing seems to imply that he is actually on top of a moving car.

The one really funny, goofy scene is when a police van is transporting a prisoner and happens to drive down a quiet residential road where a bunch of kids are breakdancing in the street. He has to stop and they go up to the window and keep dancing (not very well, either). Then one of them shoots the cop, and they continue dancing around the van, open up the back, and shoot the prisoner. Then they run off.

So you see, the breakdancing was just the setup, like how Tommy Lee Jones gets onto the boat in UNDER SIEGE by pretending to be in a band called The Fabulous Bail Jumpers. But what fascinates me is how even after they shot the cop they kept dancing. Like there was some reason for them to keep up the front. The whole thing would’ve fallen apart if they had stopped dancing.

I have to admit, I don’t understand the end of the movie. Even after Weeks has killed the bad guy, he is still brooding and he holds the gun to his head again. But then all the sudden he pulls it to the side and shoots it… and as far as I can tell he shoots a book that’s on the table. Why does he shoot the book? What did the book ever do to him? I know he is not “by the book” but that doesn’t mean you gotta literally shoot an innocent book. I don’t get it.

Also, when the credits are over the spooky loop of keyboard music continues over 2 minutes of black screen, that was kinda weird.

Well, I am not necessarily recommending this movie, and you’d probaly have to buy a copy online anyway because most of you kids seem to do the “net flicks” now where you just have to order a DVD to watch later next week instead of going and getting your grubby hands on a rare treasure like CRAZED COP by Ivan Rogers and going home and watching it immediately. Nobody leaves the house anymore it’s all done through pneumatic tubes. But I did enjoy this movie because of the grouchy presence of Ivan Rogers and the unique landscape of Indianapolis. I always like seeing a movie on locations you haven’t seen a thousand times before. Unless you live in Indianapolis, which I don’t. Ivan Rogers does.

Ivan Rogers
This entry was posted on Friday, February 2nd, 2007 at 10:15 pm and is filed under Action, Crime, Drama, Reviews. You can follow any responses to this entry through the RSS 2.0 feed. You can skip to the end and leave a response. Pinging is currently not allowed.

One Response to “Crazed Cop”