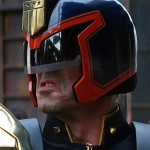 A couple weeks ago I saw a theater marquee that said APOCALYPTO and ROCKY BALBOA on it. And I thought damn, Mad Max and Rambo are both directing movies now. Tryin to join the ranks of the Badass Laureates like Clint and Takeshi. While my man Seagal is busy revolutionizing the world of DTV self expression, these guys are going in a more societally accepted direction. Of these two action hero directors, Crazy Fuckin’ Mel obviously gets the medal for ambition because he made an epic about a culture rarely portrayed on film, in a language never spoken on film. He’s moving forward. Stallone is moving backwards but that’s okay, he’s taking care of some personal business. He’s putting a cap on the ROCKY series. And doing a fine job of it in my opinion.

It turns out I did the right thing preparing for this movie. I watched the original ROCKY for the first time in more than a decade. I meant to watch the sequels again too but didn’t get around to it. Well it turns out ROCKY BALBOA is a direct sequel to ROCKY. Forget about what happens in the middle, that still happened but this is all about revisiting what happened in part 1. This is what becomes of that young guy we saw 30 years ago, with the mumbling and the bad jokes, the deep hunger for achievement and the funny hat. It’s almost like those 7 UP documentaries, or BEFORE SUNRISE/BEFORE SUNSET, or maybe HALLOWEEN H20. With punching. 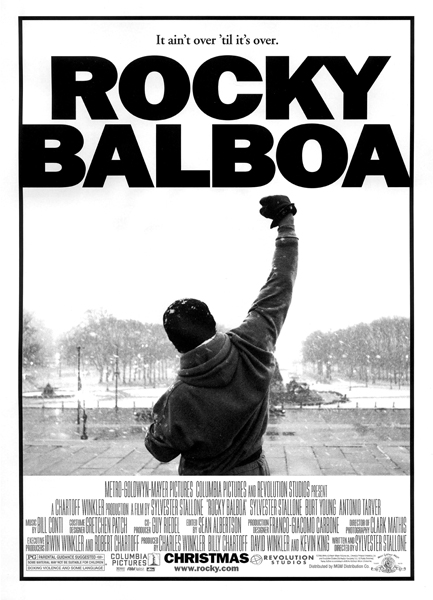 I know Harry down in Texas and his Buttnumberthon team went crazy over this movie, but the few people I knew that saw it were lukewarm on it at best. I heard it described as a long boring “why is Adrian dead?” drama followed by an awesome training montage and fight. That is partly accurate but personally I really liked the drama part. It’s not really about boxing, it’s just about this particular character who happens to be an ex-boxer. I think what made the movie enjoyable to me is that I completely believe this is what Rocky would turn into. I was worried that Sly had plastic surgeried himself in the convening years, that he’s too pretty now to play Rocky. But no, he’s looking older and wider and gruffer, still wearing that hat but now it looks like an old man hat. As a director he makes the wise decision of showing himself in alot of unflattering closeups that show he’s an old fighter. Now he walks around Philadelphia and he’s a beloved celebrity, everybody calls him by his first name and he’s happy to take photos with random people who come up to him. He runs a small, homey restaraunt (called Adrian’s, of course) where he hangs around and tells fight stories to the customers. The thing that’s really missing in his life though is what the original ROCKY ended on: Adrian.

When a highly trained team of terrorists kidnaps Adrian, Rocky has no choice but to– nah, just kidding. I think some people forget that ROCKY is not an action movie, it’s a best picture winning drama. And the new movie is a non-best picture winning drama. The movie begins on the anniversary of Adrian’s death of “the woman cancer.” Rocky visits her grave and we know he does this alot because he has a folding chair that he stashes in a tree in the cemetery. The first section of the movie has Rocky and his brother-in-law Paulie (still played by Burt Young) nostalgically visiting all the crucial locations from the original: the apartment, the pet store, the wreckage of what was the ice skating rink where he went on his first date with Adrian. I liked Paulie’s emotional outburst telling Rocky he doesn’t want to reminisce about all this shit. Rocky can do that because he was nice to Adrian, but Paulie knows he “treated her bad.”

There are references to details of ROCKY that I wouldn’t expect them to follow up on. He still has pet turtles (bigger now). He gets another dog (this time an old washed up one he can relate to instead of a young hungry one). His old opponent Spider Rico is back now, hanging out at his restaraunt. Remember when Rocky ran through that market and some dude threw him an orange? I think he visits that same market (no orange throwing takes place, though). The one that surprised me the most is when he visits the bar he used to go to and gets in a conversation with the bartender. After a little bit he realizes that she is Marie, the young girl who he lectured and walked home in part 1. Remember that scene? It’s not the same actress and she’s the wrong age but luckily most of us don’t remember exactly what little Marie looked like, so we fall for it. Anyway Rocky starts hanging out with her and she becomes one of the main characters (with Adrian dead you need a female in there somewhere I guess.)

Although the filmatism isn’t quite as raw and gritty as in part 1, they went for a little more realism than the rest of the series. The heavyweight champ he fights in an exhibition match is less of a supervillain than in some of the sequels. He’s a spoiled punk with an ego, so you root against him, but he has some moments even at the beginning to show he’s not a bad person. Even when he’s insulting Rocky by telling him he’ll hold back in the fight he’s genuinely trying to be nice.

The biggest difference is the fight, which (except for a too-arty passage of time montage in the middle) is shot like a real boxing match, and apparently they were really punching each other. It seems very real and for me that made it more involving. Because I saw it at this late date I didn’t have some sold out crowd getting excited and chanting “ROCKY! ROCKY!” There were probaly less than ten people in the theater and the crowd wasn’t rowdy at all but to my surprise some girl yelled out “Come on Rocky!” several times during the fight, like she thought she was really there. The first time it happened I half convinced myself it was just really good surround sound, but then it kept happening. That proves it, this is a good scene, it tricked somebody into thinking it was a live event. But it was only a movie.

The sentiments in this movie may be a little corny, and a little too rehashed from the first ROCKY picture. But to me it really works because it feels so sincere. The first movie was about this young hungry guy tired of being a loser, wanting to get somewhere in life, getting his big shot and going as far as he can with it. And obviously Stallone was in a similar situation to his character and he did pretty well, he got on Oscar for the screenplay and everything. ROCKY BALBOA does the same sort of thing, now he’s this old guy that people like but they think he’s a joke, they think he’s used up. And he knows people think he’s crazy, including his son (no longer Sage Stallone and now working an AMERICAN PSYCHO type job) for wanting to fight again. But he has this one thing he wants to do and of course Stallone was the same way, wanting to do this last ROCKY movie even if people are laughing at a 60 year old man doing another boxing movie. You gotta love the training montage where his trusty corner man goes through a list of all the things his old man body can’t do anywmore and why his only hope is blunt force and he says, “Let’s start building some HURT BOMBS!”

One thing that’s weird about this movie. Since they are homaging/rehashing moments from the first movie, of course they gotta do Rocky jogging and going up the stairs and what not. The sequence ends with a freeze frame of Rocky holding his fist in the air triumphantly. It would look pretty badass except he’s also holding his mangy dog Punchy in the shot, so it looks goofy. Just to make sure Rocky’s ego doesn’t get too big.

The funny thing though is they used the freeze frame shot for the poster. Only they photoshopped out the poor dog. Can you believe that shit? I would be so pissed if I was that dog. Come on marketing department, you saw the movie, you know you can’t count that dog out just because he’s old. That dog is gonna bite you on the ass. That dog deserves his revenge, and you deserve to be bit. I got half a mind to go around with a sharpie and draw the dog back onto all the posters. I am not a good draw-er though so it will probaly end up looking like a seal or a weasel or something. And you know what, it would be pretty cool if Rocky was on the museum steps holding a seal. I wonder why they didn’t do that. Just one of those weird things I guess. Maybe a budgetary issue.

boxing Burt Young Sylvester Stallone
This entry was posted on Monday, January 22nd, 2007 at 12:00 am and is filed under Action, Reviews, Sport. You can follow any responses to this entry through the RSS 2.0 feed. You can skip to the end and leave a response. Pinging is currently not allowed.