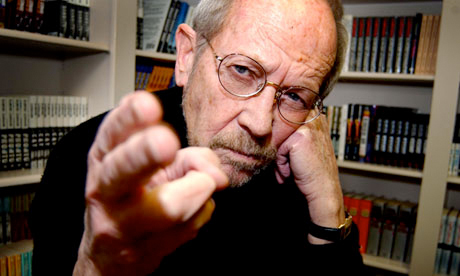 Well, Elmore Leonard passed away yesterday. Not too far from 90 and he was still writing books. Not bad. Others have paid tribute to his unique talents, and around here if I tried to do that I think it would be preaching to the converted. Or preaching to the preachers. But I want to say a few words about a couple aspects of his work that mean the most to me personally.

I would say that Leonard was a big inspiration to my writing. I don’t fool myself that I have the same talents as him. I’m trying to write novels now and it’s astounding to me that he didn’t know how his stories were going to end. He just had the characters and then he saw what happened to them when he wrote it. I could never do that! But he always made it seem natural.

When you think about it, though, of course it all came out of the characters. The Elmore Leonard character is so identifiable. My favorite is the dangerously stupid Elmore Leonard character, a criminal who is not a big shot (though he may think he is) and is a laughable goofball at times (though he may not be aware of that) but he’s a genuine threat. That he doesn’t know what the fuck he’s doing, that he’s not the mastermind he thinks he is, makes him all the more dangerous because he’s liable to do something stupid and get somebody killed.

Some Leonard villains are irredeemable. He was great at writing depraved sickos. But even his worst guys weren’t hard to spend time with. They were interesting, often funny, always human, sometimes you even rooted for them. His good guys were multi-layered too, they could be thoroughly heroic and still do stupid shit. Let’s face it, badass Karen Sisco was not that smart to start dating the bank robber she was supposed to be catching. In Elmore Leonard most people have good qualities and bad. It makes for really captivating stories, but I figure it also says something good about Leonard as a person. He saw that people were people, and that people were interesting.

And man, he had that tone. How do you write something that’s gritty and streetwise but still funny and likable? He didn’t always do it the same, but that was the one he was the master of, the Serious But Funny. And that’s my sweet spot. That’s what I love most in crime stories, action movies, horror movies… it’s even what I strive for in film criticism.

And there’s his style. So good with conversation, obviously. But so streamlined in his prose. More descriptive than Richard Stark, but not wasting a bunch of time fuckin around.

I read his 10 Rules of Writing alot. Always been meaning to buy that little hardcover book of those. You’re not gonna believe this, but one of those rules honestly changed my approach to writing reviews.

“10. Try to leave out the part that readers tend to skip.

A rule that came to mind in 1983. Think of what you skip reading a novel: thick paragraphs of prose you can see have too many words in them. What the writer is doing, he’s writing, perpetrating hooptedoodle, perhaps taking another shot at the weather, or has gone into the character’s head, and the reader either knows what the guy’s thinking or doesn’t care. I’ll bet you don’t skip dialogue.”

I always wrote longer reviews than most people, and I used to get alot of shit for it and I didn’t care that much. But, you know, I didn’t want them to be boring, I didn’t want people to be skimming them. And until I read that I never really thought about writing in that way, like the way it looks on the page. I realized that it’s true for me at least. I’m kind of a slow reader, and I get intimidated by “thick paragraphs,” big chunks of text, but I glide right through dialogue and short paragraphs. The negative space on the page helps give me momentum.

And when I realized that I started shortening my paragraphs, or cheating by chopping them up into multiple paragraphs. I know in some respects I’m not following the rule as stated, but it made me think of writing in a different way. Sometimes I lapse, but I usually catch myself.

Anyway, it was easy to take Leonard for granted, because he was so with it and productive that he didn’t seem like a guy in his late 80s. How many guys in their late 80s get excited about a TV show and go write a book of ideas for them to use in the next season? Good ones? So I’m gonna miss the guy. But I’m glad he left behind so many books, some good movies and TV shows, some good feelings, some laughs. And that tone.

Thank you all for indulging me. What is your favorite Leonard book? To be honest most of the ones I’ve read are the ones that were already or later turned into movies. I could stand to branch out a little.

Wow, I just looked and learned that I’ve never officially reviewed either of my favorite Leonard-based movies, OUT OF SIGHT or JACKIE BROWN. Add that to the list of future projects. But here are all the other Leonard adaptations I’ve written about.

Elmore Leonard
This entry was posted on Tuesday, August 20th, 2013 at 1:04 pm and is filed under Blog Post (short for weblog). You can follow any responses to this entry through the RSS 2.0 feed. You can skip to the end and leave a response. Pinging is currently not allowed.