SIFF: Vern on SINCE THE END OF THE WORLD! 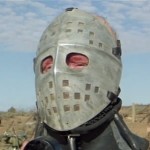 Hey folks, Harry here – Actually, while Vern kinda rags a bit on this, I’m curious to see this for the exact same reasons stated in his opening paragraph… I’ve seen 28 DAYS LATER, CABIN FEVER, DADDY DAY CARE – but I haven’t seen CITY OF SARS (I hear that’s shooting in Toronto currently) or SINCE THE END OF THE WORLD and thus far… the best one is CABIN FEVER, and I’m sure it’ll remain, though I still think the best virus/end of the world flick is NO BLADE OF GRASS, but since 10 people have seen that… I’m probably in the minority there. Here’s Vern at the Seattle International Film Festival…

Vern sees SINCE THE END OF THE WORLD at SIFF

Harry I don’t know if you’ve heard of this one but apparently it’s been playing the festivals for a couple years. Otherwise I’d think it was part of a slew of disease/virus movies like 28 DAYS LATER, CABIN FEVER, CITY OF SARS and DADDY DAY CARE. There seems to be a general panic across the world about diseases and poisons like SARS, West Nile, the flesh eating virus, mad cow disease, anthrax attacks, etc. Oh come on, let’s not be a bunch of sissies people, it’s only your FLESH being EATEN by a VIRUS. Really not a big deal. Anyway the concept of SINCE THE END OF THE WORLD is that a mysterious disease has killed off most of the world. Now it’s 12 years later, there are 168 survivors in the San Francisco Bay Area and some dudes decide to make a documentary about it. 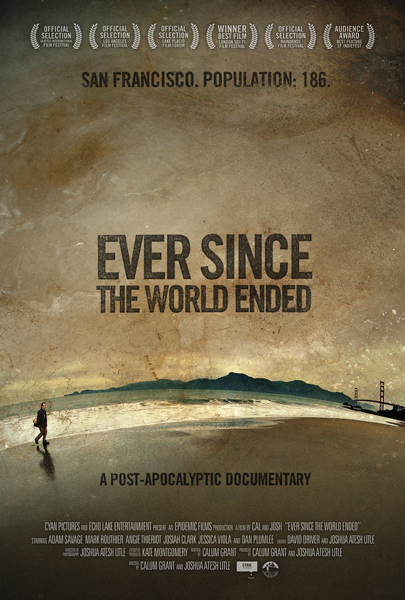 It’s really executed pretty well, with very good, naturalistic acting. There are interviews with different kinds of survivors, including a doctor, an ostracized arsonist, some young scavenger kids who don’t really remember the old world and don’t miss it, etc. It deals with some of the issues they would deal with like women looking for a male to impregnate them, or the society trying to figure out what to do when they have a violent criminal among them but don’t have any form of law enforcement.

I haven’t seen DADDY DAY CARE so I’m not sure if it’s about a deadly plague or not, I just needed another one to pad out my claim there. sorry.

Like anybody I guess I am a sucker for these types of scenarios. Like remember that movie THE QUIET EARTH where there’s only a couple people left in an empty city? Or what about OMEGA MAN, when Charlton is driving around in the day time and there’s just nobody around at all. He gets so lonely he starts playing chess with a bust of Beethoven and then these fuckin zombie vampires in robes start trying to catapult fireballs up into his window. What a bunch of assholes! Or best of all is DAWN OF THE DEAD where there are zombies all over the place but not too many regular people. That’s the best movie about scavenging because they live in the mall, with all its leftover products at their disposal, and it’s both your greatest fantasy and your favorite scathing satire of consumerism. That really is one of the great movies of our times and I honestly don’t know who I plan to punch in the balls first, the people who are remaking DAWN OF THE DEAD or the people who are remaking TEXAS CHAIN SAW MASSACRE. Maybe they will have to stand next to each other and then I could just punch both at the same time. POW! But then who gets the left hand and who gets the right? I guess they could switch off and get one of each, that might work. But I think I may be getting off track here.

The point is that everyone enjoys these type of nightmare scenarios where some sort of plague or disaster leaves a small group of survivors living off the remnants of civilization. SINCE THE END OF THE WORLD does not completely deliver on what you expect from this genre. There is not alot of scavenging, almost defiantly so. They have a little scene where they show people going through houses looking through stuff, but other than that scene there’s not much evidence that that goes on. Like when a guy is getting a part replaced on his bike you wonder what’s the point, couldn’t he easily just find another bike that doesn’t need repairs? And because it’s done on a low budget there are only a few shots of empty city streets or landmarks.

On the other hand the filmatists have come up with a clever new take on the genre. Usually in a post-apocalyptic type deal you have a bunch of violent savages driving around in cars fighting over gas or stealing from each other or jugging for the blood of heroes or something. Here you get the opposite. Liberal San Francisco natives bein all lovey dovey, talkin about community and sharing big fancy houses. Making fruit salad, going on hikes, helping fix each other’s bicycles, etc. Of course, they don’t seem as liberal when they want to execute the arsonist in case he does something again, which is one of the slight social messages in the story.

I gotta be frankly honest though, this is a well made movie but I wasn’t too hot on it myself. I shoulda known what I was in for so maybe it’s not fair but I really don’t think the fake-umentary format works for a story like this. Sure THE BLAIR WITCH X-PERIMENT or whatever worked for some people because it was scary. And the SPINAL TAPs and WAITING FOR GUFFMANs work because the actors are able to be so funny in ways that wouldn’t work as well in a traditional storytelling approach. But with this I’m convinced that it would be more interesting in a straightforward story. All the documentary format does is keep reminding you that no matter how hard it tries to seem real, it is NOT real. It forces you to keep comparing it to reality and see how miserably it fails to stack up. Not only do you notice things that don’t quite come off as real, but you keep thinking about great documentaries and realizing how much more interesting it is to interview real people than fake ones. I’ve never seen a fake-umentary with characters as interesting as the people in SALESMAN or STREETWISE or AMERICAN PIMP or WRESTLING WITH SHADOWS THE HITMAN HART STORY or (etc.)

Also with this one I kept wondering why the characters would be making this documentary anyway. Who are they going to show it to? We already know there is no TV and there are only 168 people in the Bay and 166 by the end of the movie and wouldn’t this documentary about normal life to them be kind of boring? I decided they were making it just for a record of what happened for the future. But then the movie ended with a surprisingly packed screening of the movie within the movie.

And I cannot tell a lie, when the opening scene of the movie started re-playing on the screen within the movie, it scared me. Oh shit, they’re not gonna make us watch the whole thing over again are they?

There was also a short, WALLS, a generic dystopian sci-fi story about 2 men who spend their lives locked in a room working for a factory. I mean I like that kind of stuff but this short is so lacking in original ideas that it could have been made in the world where it takes place.

See I’m whippin out reviews Harry, but this is only the beginning.

Calum Grant Joshua Atesh Litle mockumentary post-apocalypse
This entry was posted on Friday, May 30th, 2003 at 7:27 am and is filed under AICN, Drama, Mystery, Reviews, Science Fiction and Space Shit, SIFF. You can follow any responses to this entry through the RSS 2.0 feed. You can skip to the end and leave a response. Pinging is currently not allowed.