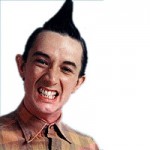 Hey boys I got a new one for you. There is a movie coming to video called ED GEIN, about this sick fuck named ED GEIN. If you like movies about a guy running around in the moonlight howling and beating a drum and wearing a lady’s privates for his clothes, then this is the movie for you. But more about that later.

When they first announced this one it confused horror freaks everywhere, because they were saying it was a “prequel” to the TExas Chainsaw pictures. you know how folks were about prequels back then, it was the big thing. first it was trilogies, then prequels, now who knows what. point is it was a different time. A more innocent time. But rest assured this is just a straight up biopic (short for biographical-type-picture) with no references to leatherface, chucky, or even the matrix.

The ONLY connection to the texas films is that Ed Gein is the real life sicko pervert fuckwad who inspired that movie. He didn’t live in texas or use a chainsaw but he did like to eat the forbidden meat of man as well as to wear people’s skin and decorate his house with their body parts.

i mean, jesus. i don’t mean to be a prude but WHAT was this guy thinking? I guess this was the ’50s but STILL. I hope we have progressed a little since then as a society, personally.

Anyway Eddie Gein’s work was a major influence for Psycho. You know that whole deal with Norman digging up his dead mother and keeping her around thinking she’s talking to him? Yeah, Eddie was into that too. to my knowledge mr. gein received NO proceeds from the psycho franchise though, let alone screen credit, so don’t worry. if he had been a member of the Writer’s guild it might’ve been a different story but why get into the maybes and could’ve beens. let’s stick to the reviewing of motion pictures of Cinema and home video, thank you very much.

actually come to think of it maybe it would’ve been good if this fella had some hollywood scratch sliding his way, maybe he could’ve paid to ship in meat from some cannibal island somewhere instead of actually going out and killing his neighbors. anyway sorry bout that i’ll get to the movie.

Steve Railsback of playing Charlie Manson fame stars as the title maniac, and it is his acting performitude that makes the picture. He is not portrayed as evil in any way, just a big dumb lug with a bit of a social problem. When the picture opens he is already digging up his mother but we forget about that quickly. He is just some lonely guy who people think is a weirdo cause he collects shrunken heads. And he says odd things sometimes but they just figure he’s kidding and laugh. And then he thinks he’s a comedian so he repeats it.

The movie mostly sticks to the facts that are known about the case and doesn’t try to speculate too much. We don’t see much cannibalism or know for sure if that really is venison he feeds his friends with. We mostly stay on the outside but I mean, we are not as surprised as the cops are when they find a human heart on his stove at the end.

The one major flight of fancy or whatever is in the few scenes when Ed imagines his mom talking to him and telling him what to do. It’s too bad because even though Eddie is the ORIGINAL at this fucked up idea it still seems kind of hackneyed now as if he ripped it off from psycho. luckily it is played down, as is all of the gore. You only see enough to know what he is doing, which is pretty much the most fucked up shit anybody has ever done, ever. but for a movie about a guy cutting off tits and wearing them, it is pretty tame. So you’re able to empathize with the poor crazy schmo.

One thing that makes the movie stand out is that, like in the actual case, mr. gein spends alot of his time trying to hook up with the older gals in his neighborhood. He is obviously attracted to them and asks them to go rollerskating and what not, and then he kidnaps them. You’re so used to seeing young, attractive gals get stalked in horror movies that it made me feel really uncomfortable to watch. and then it made me wonder what that says about me. i mean shit. i HOPE i’m not enjoying seeing a young hottie get stalked in these movies just cause she’s good lookin. whatever’s going on here it gives it a different, realistic type feel that makes it more powerful than you’d expect in your straight to video horror picture i.e. the leprechaun pictures, uncle sam, mr. frosty etc.

You know what would be funny, if they had a movie where somebody jumps up in the air and they freeze, and the camera spins around them and everything, like on the matrix. Only it’s NOT the matrix, it’s a totally other movie. that’s why it’s funny. ha ha, get it.

Now I’m not sure this is a movie that needed to be made, because the real story of Ed Gein has already been told in the movie Deranged. They changed the names but they followed the facts pretty closely and this old cowboy Roberts Blossom is great as the lead cannibal. that one plays it gorier with horrendous makeup by Tom Savini (from that great movie Knightriders) and also plays it for laughs. The new Ed Gein: the movie is more serious with only a couple of very dry moments of black, black, black humor. the blackest. not like the wayans brothers, jackass, I mean just very macabre type humor is what it means. come on fellas let’s be serious here.

Anyway I gotta say, Ed Gein is not must-see but it’s alot better than I thought it would be. I would recommend a rental to the curious horror or true crime fans out there looking for something sort of along the lines of Henry: Portrait of a Serial Killer, but tamer, but at the same time alot sicker.

But seriously though Ed. WHY would you wear a gal’s privates? My mother was religious too. I grew up poor. I’m not talking put water on the cereal instead of milk. I remember times when we didn’t even have cereal, so my mom would just put a bunch of dental floss in a bowl and pour water on it. and this was before the days of mint or cinnamon floss. this wasn’t even waxed. But the point is I may have gotten into some trouble. I may not have gone on the best path in life. but I am proud to say I never ONCE wore a gal’s privates. Not even skin!

please kids, I am not a role model. but stay clean and stay in school. thanks guys.

biography Chuck Parello Steve Railsback
This entry was posted on Thursday, June 14th, 2001 at 10:43 pm and is filed under AICN, Crime, Drama, Reviews. You can follow any responses to this entry through the RSS 2.0 feed. You can skip to the end and leave a response. Pinging is currently not allowed.