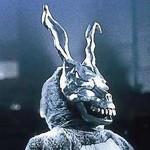 Hey bud this is Vern. I don’t want to be a squealer or nothin but fuckin Moriarty man, that dude put me on his spam list and keeps dumping my reviews. I wrote a review of Cruel Intentions 3 to name one example of a review that the world obviously needs to see but he threw it in the trash with the p.enis enlargements and the v~icodin. I mean I understand the guy is busy, but come on. I can’t imagine he’s staying up all night polishing the dialogue on that thing. I’ll give you a hint bud: Scorpion says “Get over here.” Don’t be writing any monologues for him or anything. And then you’ll have a few extra minutes for dusting your flatscreen and putting up my reviews. So anyway that’s not the point, the point is this. I’m not going to as many SIFF movies this year, but I did manage to see Donnie Darko’s Director Cut. The world premiere. NOT the press screening which was already reviewed by “Gooter.” I don’t do press screenings. I saw it with the people. That’s just the kind of guy I am. 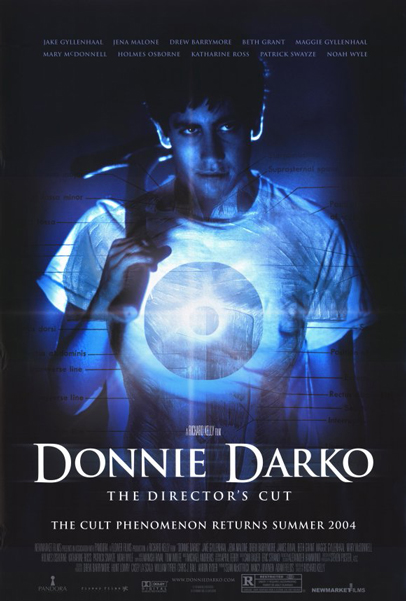 I suppose you are wondering what the differences are from this version and the original version that we all know and memorize and have tattooed on our balls, apparently, judging by this audience (more on that later). Well you got me bud, I’m not really sure except that there are some pages from the time travel book printed on the screen alot. I really don’t know this movie good enough to notice any other difference, but I guess that just shows whatever the dude added flows pretty naturally. My impression is that there was more emphasis on the atmospheric business – the long dialogue-less takes, the hypnotic drones on the soundtrack, the David Lynch shit. But maybe it just was more effective on me this time around. The sound was real good (I never saw it in the theater before) and the whole thing just kinda felt creepier than I remembered it being.

I gotta say I like this movie. I like these types of directors that know exactly how they want to tell a story and they just do it, regardless of what anybody else thinks. This is an unusual combination of teen movie, sci-fi, CARNIVAL OF SOULS type horror and freaky “dude you’re blowin my mind” teen trip out destiny shit. And he doesn’t really follow any established formulas. He makes it take place in ’88, and there’s some nostalgia in there but he doesn’t really use it for camp like you expect. Like they wear school uniforms so there is not many jokes about ’80s clothing. I think it is a good choice and I think the Michael Dukakis motif really works – he is just like the guy who died on mom and dad’s prom night, or like Donnie Darko. Some guy you heard about and then he was gone and you forgot about him. At the same time it parallels the “tangental-universe” time travel business because they discuss what Maggie’s life would be like if Dukakis won the election as opposed to if fucking god damn Bush won. I guess it’s like that one bowling movie “big lebowski,” that at first it seems to be set in a particular time period for no reason and then the more you think about it the more it seems like it couldn’t take place at any other time. Same thing with Barry Lyndon or Viva Rock Vegas.

I got a couple questions.

Now let me say I saw DONNIE DARKO a couple years back and I wrote a positive review of it and what not. And I knew it was gonna catch on on video, but not like this. I had no clue. I mean you shoulda seen some of these fuckin people Harry. There was at least two guys in there wearing bunny costumes. There was people that drove from California and probaly further. In the q & A (question and answer) session afterwards every question started out with a couple minutes of emotional rambling about how much they love the movie and how much of a genius Richard Kelly (young writer/director) is. There was one guy in a skeleton costume who announced that he watched the movie at least 4 times a week and also that it changes his life every time he sees it. That means his life changes at least 4 times a week. Pretty soon he is gonna start evolving or devolving like in Altered States. That would be fucked up man.

Have you ever seen TREKKIES, it was like that. Or AMERICAN PIMP, but they say “bitch” less.

I was kind of thrown off by these nutballs but thinking about it afterwards I started to realize that it makes perfect sense. Every generation has their REBEL WITHOUT A CAUSE or their BREAKFAST CLUB or their HEATHERS or their, I don’t know, AGENT CODY BANKS 2 or something. Well maybe that last one doesn’t fit I don’t know what kids watch today besides DONNIE DARKO. But anyway these are people who were in high school when the movie came out in 2001 and it was their movie, the one that spoke to them as high school outsider or perceived outsider types. Maybe they had some problems, they were in therapy or on ritalin or something so Donnie reminded them of themselves. Or more likely they were not in therapy or on ritalin but in their dramatic teenage point of view they think they feel like Donnie. In a way. When you’re that age you think nobody understands you so when somebody like James Dean or a guy in a skeleton suit seems to speak to you then fuck man, go with it. And then they start watching it over and over and searching for deeper meaning and discussing it in chat rooms and then they paint storyboards onto their ass with henna, lock themselves in their room and play Vice City for ten days straight while they ponder whether they want to live or die. That’s what these kids do and if it’s too loud you’re too old. And extreme is spelled X-treme now also.

Nah just jerkin your chain but if that’s your generation’s movie then you could do a lot worse. I mean it’s a pretty good one. Even the great HEATHERS has some cheesy directing and is somewhat based on various movie formulas. This one is more of an art movie, it has alot more ambiguity and mystery and unexplained touches. And by making the movie take place in the horrible decade of the ’80s, the movie somehow becomes timeless. Yes, there is awful white people music in it but it already sounded that way when the movie came out. It wasn’t due to aging.

I would say this will be a good one to see when it comes out in theaters, although to be frankly honest I think the obsession of some of these people will make it harder for the uninitiated to catch on. It is harder to enjoy something when you know people are THAT into it, that they would wear a fuckin bunny suit and travel across the country to see it early. On the positive side, I didn’t hear anyone recite dialogue along with the movie or yell out “this part is new,” and for that I thank them all.

Confidential to Quint: Both Drew Barrymore (from the wonderful McG pictures) and Jenna Malone were there, along with Mary McDonnell who is great as Donnie’s ma. Drew kept “throwing up metal” I think they call it when they introduced the picture. I have seen her “dissed” on this particular web sight but in person she seemed like such a lovable goofball that you could see why she is so successful. She did not stick around for the Q&A though so a gal next to me was not able to ask what exactly it was about E.T.’s feet that she didn’t like.

Patrick Swayze Richard Kelly
This entry was posted on Monday, May 31st, 2004 at 3:50 am and is filed under AICN, Drama, Mystery, Reviews, Science Fiction and Space Shit. You can follow any responses to this entry through the RSS 2.0 feed. You can skip to the end and leave a response. Pinging is currently not allowed.