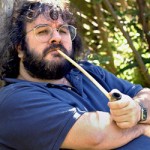 When I reviewed the Evil Dead pictures, alot of individuals suggested that I would also like Dead Alive. And I guess I can see the connection, but excuse me while I kiss the sky – I’m afraid Dead Alive is no Evil Dead 2 in my opinion. This is a comedy about a guy in New Zealand whose mom gets bit by a half rat half monkey and turns into a zombie. And then the zombie disease starts to spread and what not and I think you can see where this is going, before you know it there is blood spraying everywhere. 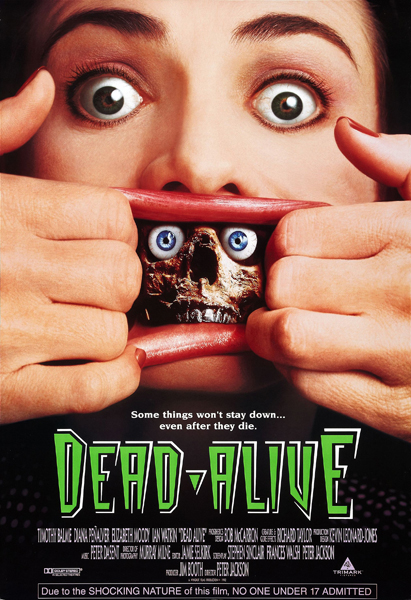 What Evil Dead has that Dead Alive doesn’t is a delicate control of atmosphere and tone and a strong central character to hold it together. Ash is an unforgettable character, he is hilarious and he is an idiot and we love to see him in agony. Dead Alive doesn’t have that appeal. In fact I don’t even remember the dude’s name, sorry bud but it’s the truth. I believe he had glasses, average height, possibly light colored hair. That’s about all I remember.

Evil Dead also has such a strong atmosphere that it is creepy even when it is funny. Sam Raimi really means it with his horror, he doesn’t pull punches, so even when he’s making us laugh at flying eyeballs and what not we don’t forget the threat of those cackling demons and flying cameras and rapist trees in the woods.

Dead Alive doesn’t have that. It takes place in a small town which is well photographed but low on creep value. There are jokes like a doctor who is so obviously a Nazi that there is a little tear in his sleeve revealing a swastika armband underneath. Like in the cartoons. In that context you can’t really take any of the zombies or what not as a serious threat. I guess not all horror comedies have to work as horror, but what I like to call The Evil Dead Precedent proves that it is possible so I think it’s something that should be strived for. I mean there are two types of horror comedy, there is Evil Dead and there is Dracula Dead and Loving It. You decide.

There are two reasons why everybody loves this movie though, and they are pretty good reasons. One is where a priest says “I kick ass for the lord” and starts doing a bunch of karate. The other is where the forgettable main character lifts up a lawnmower and walks through a room plowing a crowd of zombies into slush. This really is the goriest scene I have ever seen and it is so ridiculous it is hard not to love it. This sequence builds into many elaborate and disgusting creature effects. They are very imaginative and well executed, pretty much in the spirit of the original Evil Dead. But it’s like having one amazingly great chapter near the end of a book. You can enjoy it and give it its due but still, the thing doesn’t work as a whole. You don’t give a rats fuck about what happens to the characters one way or another. You just wanna see some slimy tentacles pop out of their mouths or something. It’s too bad the story and characters don’t live up to the power of the lawnmowing zombies sequence.

Good try though Peter Jackson I’m sure some of this motherfuckers other stuff is better, this definitely shows some brains on the guy but I don’t think it’s no masterpiece, sorry just tellin it like it is.

Peter Jackson
This entry was posted on Monday, January 1st, 2001 at 4:03 pm and is filed under Comedy/Laffs, Horror, Reviews. You can follow any responses to this entry through the RSS 2.0 feed. You can skip to the end and leave a response. Pinging is currently not allowed.