I gotta admit though it was worth it for the opening 15-20 seconds. The picture starts out one day at the grave of Bruce Lee. (Actually it is clearly not the real grave of Bruce Lee here in Seattle, but hey man, movie magic.) Anyway all the sudden there is stock footage of lightning in the night sky. Then some guy who you gotta assume is Bruce Lee hops out of the dirt, and the title goes on the screen and the badass ’70s music starts playing. Then they even show the ridiculous painted cover to the video, which shows Bruce Lee coming out of his grave and a weird demon flying above him. 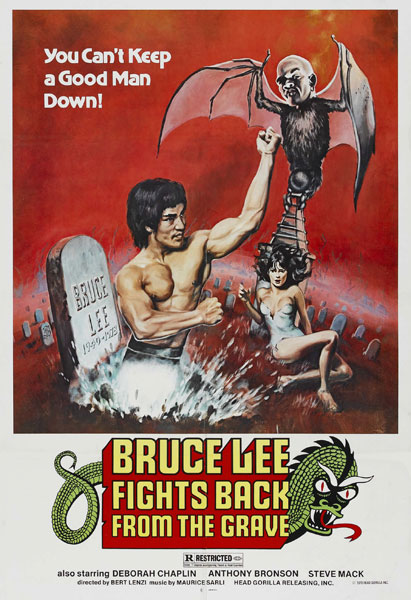 Next we see our man, who only looks slightly more like Bruce Lee than Jason Scott Lee did, on a plane. It freezes on him taking off his sunglasses as it says BRUCE K.L. LEA on the screen.

At this point I was ready to love this movie. I figured Bruce came out of his grave in Seattle, now he’s flying to LA or Hong Kong or somewhere and we’re gonna find out that some foolish motherfucker was responsible for Bruce’s death by misadventure and that motherfucker is gonna get entered by the dragon. Or whatever.

But no. Not this movie. Instead, the guy goes to a combination of LA and Hong Kong which is LA but inhabited by Asians. There he looks up an old friend that he trained with. Then he finds out some guy died and he tries to get to the bottom of it. And he meets a gal. And there are a couple fights.

There really is no badass revenge to be had, and they never mention that he is Bruce Lee at all. They never refer to his death or him having returned from the dead. Nobody recognizes him as a movie star or anything. I doubt they even knew while filming that they were going to say he was Bruce Lee. And the only part that’s very amusing is when a witness describes the physical appearance of some attackers. One of them is described as a “cowboy,” but apparently cowboy hats aren’t readily available in Hong Kong, because the guy is wearing a little straw hat like a kid would wear. That was kind of funny. Otherwise this movie was a bust.

My advice is don’t bother renting it unless you are planning to turn it off as soon as the end credits are over. Which might be kind of a waste of money but what the hell man it’s your life to live I’ll keep my nose out of it.

Bruce Bruceploitation Sho Kosugi
This entry was posted on Monday, January 1st, 2001 at 4:04 pm and is filed under Action, Martial Arts, Reviews. You can follow any responses to this entry through the RSS 2.0 feed. You can skip to the end and leave a response. Pinging is currently not allowed.

One Response to “Bruce Lee Fights Back from the Grave”