This is one of Bruce’s more gentle movies where he is not a Badass. There is not exploding in this one and he never says a funny line after he kills someone because, to be frankly honest, he never kills ANYONE in this movie. However despite this disappointment I think alot of motherfuckers will like this movie if it catches on on the videos.

Bruce plays Malcolm Crowe, a psychologist type dude who just won an award for his work with the children. Unfortunately a naked guy is in his bathroom and shoots him. Turns out naked man was a former patient of his and lets face it, SOMEBODY dropped the ball on this kid he ends up in Bruce’s bathroom, waving a gun around, WITH NO CLOTHES ON. I have known a lot of motherfuckers who shot people or broke into their houses, some with no shirts on. This is pretty popular in fact for guys with big muscles or tattoos of any kind. Even a guy who has just a Tasmanian devil tattoo wants to show it off for some reason, I mean jesus christ these tattoo guys and their vanity. Anyway sometimes guys do it with no shirt on, and sometimes guys do it in their boxer shorts, when it’s on short notice and they didn’t have time to put pants on. You know, crimes of passion. But in another mans’ house WITH NO CLOTHES let me tell you that’s a whole different ballpark in my opinion.

A year later or something Bruce has a new patient who reminds him quite a fucking bit of the naked man when he was a kid. You start to figure out right away that Bruce is trying to redeem himself by solving this case. I have never been into the psychologist scene so I’m not sure but I bet he was embarrassed about the whole no clothes thing I mentioned. I mean people start snickering and you gotta do something, you gotta prove that you know how to help a kid. 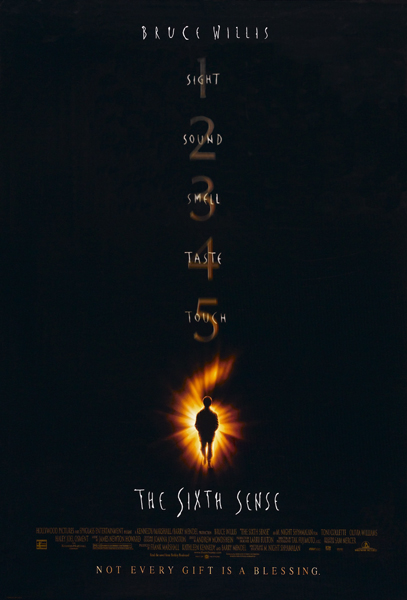 So that’s what he tries to do but there is something VERY fucking weird about this kid and I don’t want to give anything away but he sees ghosts. So the movie is about ghosts and Bruce starts to believe it and he has to teach the kid not to be afraid of the ghosts, since he is the only one to hear them maybe he can help them.

This is a very nicely done movie about the ghosts. There are some very creepy images, great acting and all the Writing and directing is very elegant and understated. This is not like your typical horror, there is no onscreen violence and it is very middle class and character driven. It is a very universal type of story about relationships between parents and their chilren, husbands and wives, children and their fears. Also the two main characters wear ties and speak clearly so it appeals to the mainstream and upper class. It is something that both horror fans and pussies can enjoy in my opinion.

The kid is very good although like Bruce he is not really allowed by the story to kick ass or anything. I would recommend this movie to anyone who likes the ghosts although again I gotta stress this is not Die Hard in my opinion, it is about ghosts.

Bruce Bruce Willis M. Night Shyamalan
This entry was posted on Friday, August 6th, 1999 at 6:44 am and is filed under Bruce, Drama, Mystery, Reviews, Thriller. You can follow any responses to this entry through the RSS 2.0 feed. You can skip to the end and leave a response. Pinging is currently not allowed.

5 Responses to “The Sixth Sense”