If you know Vern then you know I am not the kind of Film Writer who avoids giving away surprises or “spoilings” in movie reviews. The dude from Felicity is the killer in Scream 3 to name only one example. Apparently the girl in the Crying Game has a dick but I haven’t seen that one. I can verify that it does happen in one of the Sleepaway Camp pictures though so keep your eyes peeled for that one as well. Anyway point is if you want to go into a movie fresh you shouldn’t read my review first is the point. Especially when it comes to the films of Bruce Willis.

Now I am not saying this is some big surprise ending movie. There is a twist or two along the way but it’s not the Whole Point of the movie or nothing. I’m just saying, they are advertising this without telling you jack shit about what it is about. Holding back, for once. And sometimes it’s nice to sit back in that padded multiplex seat and not know what to expect, and you say Bruce, tell me a story. I was able to come in to this one fresh.

So I gotta say I was kinda surprised when the picture started and the words come on the screen that say, “There are 132 pages in the average comic book. The average page has 16 panels. In 1998 alone, over 100 adults admitted to reading comics. Some extremists even believe comic books are a legitimate form of literature.” or something along those lines.

Turns out Unbreakable is about more than just the reteaming of two film greats, Die Hard With a Vengeance‘s Bruce W. Willis and Samuel L. Shaft 2K Jackson. Turns out it’s about comics. That said, some adults will still like the movie. 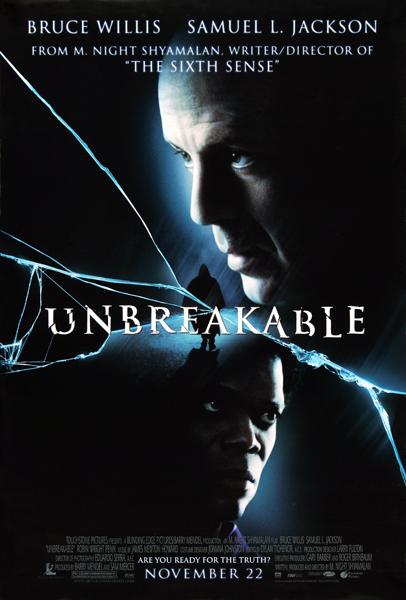 I guess at this point I should acknowledge that funny books and the internet go hand in hand. I don’t know what it is but everywhere you look on the internet, you find some dudes that are into superman and punishman and what not. On the extreme side, you got the talkbackers on the ain’t it cool news. These fuckers can’t let anything go. If harry puts up a story about what kind of food spiderman eats, there will be 700 angry responses like:

I AGREE WITH LOBO44!!!! THIS FUCKING SUCKS SHITE!!! IF HOLLYWOOD KNEW WHAT THE FANS WANT THIS WOULD NEVER HAPPEN! ON PAGE 44 SPIDERMAN WAS EATING CHEESE AND CRACKERS, *NOT* PEANUT BUTTER AND CRACKERS!!!! THIS P.O.S. IS GONNA SUCK GIANT COCKWADS FOREVER! SIGNED DARTH SUPERMAN

On the movie newsgroups, you got the same kind of thing going on, sometimes in more detail. no offense to my buddy kalelfan, who was recently apprehended at a hobby shop three weeks after fleeing from a minimum security rehab clinic. Give em hell Kal.

Even on my own discussion group, the Vernanda club over there on yahoo, you got a lot of comic book talk. Some of them even draw the books for a living. now these are individuals with some smarts in their heads. I like these individuals. I am not about to ridicule them for reading children’s comic books as grown adults. These are great fellas here regardless. Alls I’m saying is, I am probaly the one, solitary man on the internet who doesn’t read children’s comic books. Okay if iceberg slim or Richard stark was gonna put out some funny books maybe I’d look at the pictures, I don’t know. But until then that is what seperates my view of Unbreakable from everybody elses. I am a grown up.

What I’m getting at, is that this is a movie that attempts to glorify comic books, and at the same time trash everything that makes comic books comic books, and treat it seriously, so that grown ups will like it. There are no funny costumes or flashy colors or flying dudes or capes or action scenes or batmobiles or casper, archie, or richie rich. not one. So how you’re gonna react will probaly depend on what you think about comic books, but I’m not sure how exactly. like if you love guys in capes, you probaly won’t like this one because there are no capes. But if you hate comic books you will probaly hate it too, because Samuel L. never shuts his yap about how great comics are.

Most of the little comics references are subtle though. Easy to ignore. But they’re there if you’re into that sorta crap. Here’s one some a you nerds mighta missed. Bruce’s character is named David Dunn. Get it? David Dunn. It’s like Clark Kent. Lois Lane. Peter Porker. Richie Rich. Marky Mark. Dominique Daws. All the great comic book heros, besides Batman, Wolverine and Casper, have the alliteration in their names. So that’s a little nod there, huh. Glad I could help point it out.

For me, this was a good attempt to take a superman type story and tell it in a more slowly developed, down to earth pace. What would superman’s powers really be? Who would he really fight? Would he really wear a cape, or just a poncho? (this movie’s answer: poncho.) But the movie is a little bit silly in the way it tries to treat super hero funny books as some kind of prophetic scriptures on par with the dead sea scrolls and the korean and what not.

The director here is M. Night Shyamalan, who also has a small role as a yuppy who sells drugs in a football stadium bathroom so he can afford to buy original comic book art for his four year old son. Shyamalan is not necessarily one of my favorite directors. Because this is the type of spielbergian type director who tries to make movies with universal appeal. Movies that every jackass in the world is gonna like. and I mean who wants that anyway.

BUT, this dude is very talented. So talented he overcomes his asskissing tendencies with his natural sense of communicating things visually. This is a motherfucker who knows how to create mood and atmosphere with the placment of the camera device. There are many goodly staged scenes in this picture but let me name just one. There is one long continuous shot where Bruce sits in a hospital room right after a train wreck, stunned but unharmed, answering question after question from a doctor. In the foreground of this scene, out of focus, there is a little lump of white puffing up and down, apparently the convulsing chest of the only other survivor of the trainwreck. And after a few minutes, very subtly, the middle of this white lump starts to turn red. And redder. Get it, it’s blood. But it never even comes into focus. And you just stare at it.

I mean, shit. That’s a camera shot right there. thanks m. night.

If you like that style you will like this movie. This individual is good at taking a very simple story made from many different elements you’ve seen before, but going at it with a very slow, deliberate pace to give it a different feel. I mean this is about as totally different from X-Men as you could get. The only time I felt the slow pace didn’t work was when Bruce spent way too much time trying to remember if he’d ever been sick. I mean, if you’d never been sick before, you’d have noticed by now. Especially if you’re a sharp individual like Bruce.

Bruce’s performance is very low key like in The Sixth Sense. He is quiet and timid but this time he really is a Badass. There are weightlifting scenes straight out of Bruce Lee: The Man, the Myth and even one fight. Bruce ends up looking really tough and using computers or something they even made him look taller than the other people in the movie.

Samuel has a very unusual role as Bruce’s mentor Elijah. If you tried to clone Samuel L. Jackson’s John Shaft, but you forgot to wash your hands and the tissue sample got a little bit of piss in it, this is what you’d get. He wears a long leather jacket like Shaft but it fits him all wrong and makes him look like a fairy. He adds little touches like a purple sequin collar or something but it comes out looking more little richard flamboyant than shaft flamboyant. Instead of that slick bald head he’s got an unruly puff of frederick douglas hair. He’s hunched over and uses a cane, but not a pimp cane, and if he falls down he’ll break all his bones. I mean let’s be honest, he is a sex machine to VERY few chicks, if any.

Then you got Bruce’s son, a weird looking button eyed kid who clearly has the same dad as Haley Joel Osment whether he knows it or not. He wants his dad to be some super tough guy super hero or whatever. fucking ingrate. he’s Die Hard’s bruce willis for crying out loud. That’s not good enough for today’s generation of spoiled brats. but needless to say the kid gets what he wants and in the last scene Bruce flies off into space and a little tear comes out of the kids eye and reflected in the tear you see THE END… OR IS IT?

Well no, that’s not true, but I gotta admit that I had a problem with the last frames of this picture. I like the way the story ends and the pieces all fit together, but then you get the old writing on the screen routine — “Bruce’s son graduated with honors. Bruce was awarded the key to the city, blah blah fucking blah.” Like you’re watching a disease of the week movie on Lifetime.

I gotta admit I liked it though. Just take off the words from the beginning and end and I’d like it even more. Five or six more movies like this one, Bruce, and we’ll call it even for Armageddon.

Bruce Bruce Willis M. Night Shyamalan Samuel L. Jackson
This entry was posted on Wednesday, November 22nd, 2000 at 1:41 pm and is filed under Bruce, Mystery, Reviews, Thriller. You can follow any responses to this entry through the RSS 2.0 feed. You can skip to the end and leave a response. Pinging is currently not allowed.