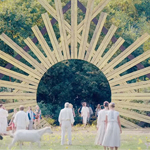 It’s very much in the vein of Aster’s first one, because it has weird and ridiculously detailed cult rituals, meticulously designed sets and camera moves, slow ominous dread building to big/crazy/gory payoffs uncharacteristic of modern arthouse horror, superb acting performances, an emphasis on tense relationships and heavy emotions, and an undercurrent of dark, uncomfortable humor that got a bunch of big laughs in the audience I saw it with (though, if HEREDITARY is any indication, people will tell me I imagined that). So it’s a similar template, but a very different palette, because there’s nothing supernatural and there’s not much darkness. It takes place in an old-timey village in Sweden where everyone wears white, it’s sunny all day, and the nights are short and never get all the way dark. END_OF_DOCUMENT_TOKEN_TO_BE_REPLACED