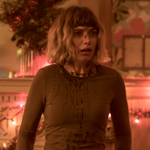 But maybe not as important as a good protagonist, and in that department BLACK CHRISTMAS definitely delivers. The story centers on Riley (Imogen Poots, 28 WEEKS LATER, FRIGHT NIGHT, GREEN ROOM), who is helping the sisters prepare for some sort of Christmas performance at a frat party, but doesn’t plan to participate. Even though she’s in a sorority, her long coat and Doc Martens signal a tinge of cool non-conformist status that Poots somehow makes credible. END_OF_DOCUMENT_TOKEN_TO_BE_REPLACED