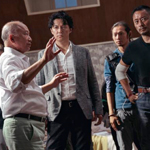 But Woo – despite throwing in a line of dialogue referencing the title of his breakthrough movie – doesn’t seem primarily interested in making a throwback to his own classics like THE KILLER and HARD BOILED. This is kind of his tribute to Japanese cinema. He made it to show his respect for recently deceased favorite actor Ken Takakura, who inspired Chow Yun-Fat’s style in A BETTER TOMORROW. It’s based on a book by Juko Nishimura that was made into a 1976 movie starring Takakura (not available on U.S. video – whatchya gonna do about that, Netflix?). Though some of the stars are Chinese it takes place in (and was filmed in) Osaka, Japan. END_OF_DOCUMENT_TOKEN_TO_BE_REPLACED