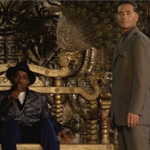 It was filmed in both English and Cantonese, so most of the characters don’t seem dubbed. Dacascos plays the lead villain, Tony Lau, a young gangster who’s trying to get his mentor Uncle Ma (Lau Siu-Ming, ABOVE THE LAW, A BETTER TOMORROW II, POLICE STORY 2) to add drug imports to his criminal portfolio. Uncle Ma is dead set against it – he’s able to pay off the police partly because he stays away from drugs – but he agrees to meet with Tony’s American friend (Coolio, BATMAN & ROBIN, DAREDEVIL) about it out of politeness. END_OF_DOCUMENT_TOKEN_TO_BE_REPLACED