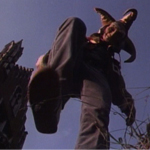 I almost turned this one off during the April Fool’s Day flashback prologue, when the popular kids prank “that stupid dork Marty” (Simon Scuddamore) by making him think he’s gonna lose his virginity to the hot girl Carol (Caroline Munro, THE ABOMINABLE DR. PHIBES, CAPTAIN KRONOS – VAMPIRE HUNTER, THE SPY WHO LOVED ME, MANIAC)  in the girls locker room showers. Instead he finds himself naked in front of ten popular kids filming him, poking his ass with a pool stick, electrically shocking him, chanting “Where’s the beef?” and having two dudes pick him up by his thighs and dunk his head in the toilet. Real Abu Ghraib shit.

Since the coach breaks it up they come after him again when he’s staying late in the chemistry lab. They trick him into smoking a bad joint and mix up his chemicals so that they explode, which ends up causing a fire and dumping a big jar of acid (unwisely left open on the edge of a high shelf) on his face. All that is fine except the acting (especially by the nerd) is Troma-broad, without the content being as crazy, and if they’re not gonna take this at least half serious I’m not sure it’s worth my time. But when we skip to the present day it straightens up and starts acting like it’s a real horror movie, so I stuck with it.

END_OF_DOCUMENT_TOKEN_TO_BE_REPLACED 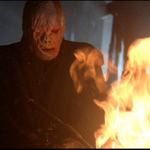 But actually Jason and these guys are scarier when they strike in the sunlight. The sanctity of the summer paradise invaded by machetes and improperly used spear guns. Lens flares and dripping blood. END_OF_DOCUMENT_TOKEN_TO_BE_REPLACED

I trust I’ve made my case. This young generation was hungry for a movie that is not named after but is slightly similar to a whole bunch of movies they never heard of including HOUSE ON SORORITY ROW. These producers and filmatists could feel that hunger, they could hear the growling stomach of the zeitgeist, and they delivered it this pizza. And we, as a culture, used a coupon and didn’t tip. END_OF_DOCUMENT_TOKEN_TO_BE_REPLACED

The House On Sorority Row

There’s a new horror movie out this week called SORORITY ROW. This isn’t that, it’s the original, which was called THE HOUSE ON SORORITY ROW. Or actually HE HOUSE ON SORORITY RO on the (out of print) full frame DVD, because the credits get cut off. (I noticed that when I set my DVD player to zoom out it was less cropped though. So try that if you watch it before the new DVD comes out in November.)

This is the story of six or seven sorority girls staying the week after graduating to have a big party. The house mother is a real bitch though and tries to make them leave. One of them gets mad and pulls a gun on her as part of a “practical joke,” then accidentally shoots at her and knocks her into a dirty swimming pool and kills her. END_OF_DOCUMENT_TOKEN_TO_BE_REPLACED