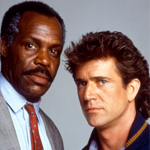 LETHAL WEAPON (1987) was of course a quintessential ’80s action movie, the Platonic ideal of a buddy cop picture, and one of the originators of the idea of Mel Gibson and producer Joel Silver (ROAD HOUSE) as action kings. But part 2 is more my idea of what “a LETHAL WEAPON movie” is like because it invented how to sequelize that movie and make it about the continuing adventures of that now-established friendship. It takes what was already seen as heightened and makes it bigger, sexier, funnier, lethal-er (apparently it’s the biggest body count in the series at 33), creating a template (and new character in Leo Getz, played by Joe Pesci a year before GOODFELLAS) that would be used for two more sequels in the ’90s. END_OF_DOCUMENT_TOKEN_TO_BE_REPLACED

I actually saw an ad for it that week and I gotta admit I was a little intrigued. You just saw some dude falling down a fire escape and maybe a car flipping or something, and I thought maybe it was some gritty low budget late ’70s early ’80s style down and dirty revenge thriller. I mean there were no stars in it, it looked like the main character was that sleazeball Tom Sizemore (actually it’s Cole Hauser, some guy who looks kind of like Christian Bale but sounds kind of like Willem Dafoe). The only way they tried to make it sound like a Real Hollywood Movie was to brag that it was produced by Mel Gibson. (the guy from MAD MAX.) END_OF_DOCUMENT_TOKEN_TO_BE_REPLACED

Well okay, I admit that Mel hasn’t amounted to as much as we as a society thought he would back in those days, but that doesn’t mean you can Write the man off entirely. I know what you are thinking, this dude hasn’t done shit since Mad Max so just forget about him. But sometimes even after he’s considered washed up by the general public an actor or actress is still putting out high quality type performances with little recognition. END_OF_DOCUMENT_TOKEN_TO_BE_REPLACED