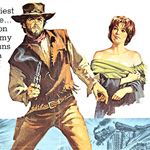 Hogan, it turns out, is sort of like Benicio Del Toro in THE LAST JEDI, he doesn’t believe in taking sides (he’s a civil war vet and thinks that makes him a sucker) but he had agreed to a job blowing up a French garrison because he’d get to keep half of their treasury. END_OF_DOCUMENT_TOKEN_TO_BE_REPLACED