It is the story of possibly the most only-Spike-Lee-would-ever-name-a-character-this character of all time, Flipper Purify, played by Wesley Snipes, who had been in Lee’s MO’ BETTER BLUES and was coming off of the success of NEW JACK CITY. He’s an upper class architect, living in Harlem with his wife Drew (Lonette McKee, BREWSTER’S MILLIONS, ‘ROUND MIDNIGHT), and things seem to be going well from the hot morning sex that opens the movie (the sounds of which greatly amuse their daughter Ming [Veronica Timbers]). END_OF_DOCUMENT_TOKEN_TO_BE_REPLACED 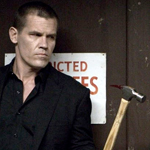 In the remake directed by Spike Lee and written by Mark Protosevich (THE CELL, I AM LEGEND), Josh Brolin (THRASHIN’) plays a Nick Nolte character named Joe Doucett. He’s an alcoholic, sexually harassing deadbeat dad and advertising asshole who after a long night of drinking, puking and crying in 1993 meets a woman who takes him to a hotel and when he wakes up he realizes she’s not there and there are no windows or doorknobs. One of those hotel conundrums, you know. And this was before Yelp and shit like that so he couldn’t even give them a bad review. Turns out this is not a normal hotel in that you can’t leave. Someone, for some reason, has locked him in this weird prison. Every day they stick a plate of dumplings and a bottle of vodka through a hatch in the door, but they don’t tell him why he’s here.
END_OF_DOCUMENT_TOKEN_TO_BE_REPLACED