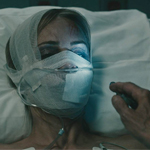 It’s one of those things where they cast an unusually beautiful TV star to play an awkward misfit who everybody picks on, the excuse I guess being that her co-workers are supposed to be mostly models. I had a hard time watching adults act out these teen movie tropes such as the ol’ ’getting mad when she finds out the cute boy only asked her out as a favor to someone who feels sorry for her’ and of course the ‘overhearing the mean girls talk shit about her when they don’t know she’s in the bathroom stall.’ Maybe it’s meant as a satirical statement about the fashion industry to make them this petty and childish, but it feels phony to me. END_OF_DOCUMENT_TOKEN_TO_BE_REPLACED