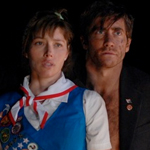 Ha. Both the director and the movie itself wanted to use pseudonyms. END_OF_DOCUMENT_TOKEN_TO_BE_REPLACED