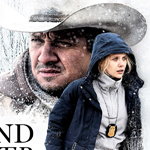 It’s a quiet, broody modern western type of a movie with matter-of-fact badassness in the dialogue and bursts of violence, tonally comparable to the aforementioned Sheridan joints, THE THREE BURIALS OF MELQUIADAS ESTRADA, NO COUNTRY FOR OLD MEN, stuff like that. But unlike any of those the wide-open landscapes are covered in snow. It’s not sweaty, it’s frost-bitten. END_OF_DOCUMENT_TOKEN_TO_BE_REPLACED