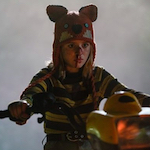 Becky (Lulu Wilson, OUIJA: ORIGIN OF EVIL) is an extremely pouty youngster who is not on good speaking terms with her dad (Joel McHale, DELIVER US FROM EVIL, MORTAL KOMBAT LEGENDS: SCORPION’S REVENGE) as they drive to the lakeside cabin together. We learn that she’s having trouble dealing with the death of her mother a year ago; conveniently the “nostalgically watching old home movies to mourn a deceased family member” storytelling device can now be done with handheld electronics. END_OF_DOCUMENT_TOKEN_TO_BE_REPLACED 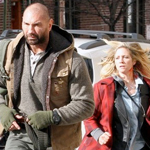 The movie follows Lucy (Brittany Snow, PROM NIGHT remake), a white girl coming to the titleistical New York neighborhood to visit her grandmother. But she and her boyfriend Jose (Arturo Castro, BILLY LYNN’S LONG HALFTIME WALK) emerge from the subway and find themselves in a literal war zone, and he is the first casualty. Treated as an outsider in the mostly black neighborhood, Lucy is quickly grabbed by two not-well-meaning locals and dragged into a house (some rare DEATH WISH bullshit in an otherwise pro-urban movie). But then Stupe (Dave Bautista, HOUSE OF THE RISING SUN), the guy who actually lives in the house, comes in to grab his things, sees them and kills them. END_OF_DOCUMENT_TOKEN_TO_BE_REPLACED