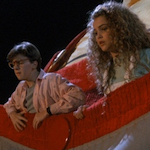 It’s directed by Randal Kleiser (THE BLUE LAGOON) and written by Thom Eberhardt (writer/director of NIGHT OF THE COMET) and Peter Elbling (Mr. T’s Be Somebody… or Be Somebody’s Fool!) & Garry Goodrow (The Smothers Brothers Comedy Hour). A story credit goes to Goodrow (who was also an actor in Shirley Clarke’s THE CONNECTION), so I suspect that means he was the one who wrote BIG BABY, an unrelated giant baby script that was rewritten to fit into the HONEYverse. In that sense, the HONEY saga is much like the DIE HARD series. END_OF_DOCUMENT_TOKEN_TO_BE_REPLACED